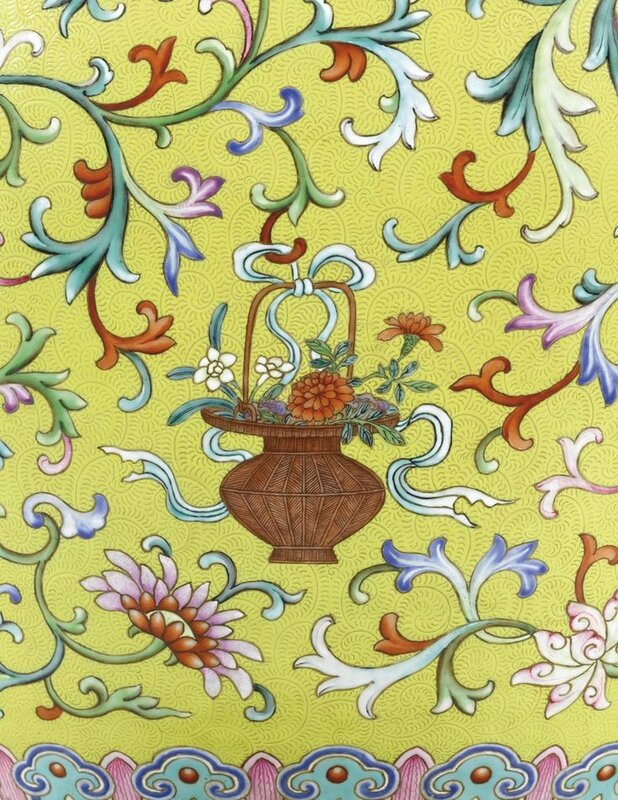 the massive vase mightily constructed with an ovoid body sweeping up to a waisted neck and flared rim, the exterior luxuriantly decorated in the famille-rose palette with large stylised flower heads, including lotus, iris and honeysuckle, all wreathed by feathery foliate scrolls, a cluster of peaches issuing from one large bloom in the centre, the floral blooms interspersed with beribonned anbaxian emblems, including a double-gourd, a fan, a sword and a basket of flowers, all above an upright elongated ruyi-shaped lappet border encircling the base, the neck decorated on both sides with a stylised floral bloom suspending a chime with a double-fish and a tasselled wan symbol attached to it, the neck flanked by a pair of scroll handles in the form of a stylised dragon, all between three bands of various petal lappet bands encircling the rim, base and splayed foot respectively, the footrim bordered with an iron-red 'classic scroll' band, the opulent design delicately picked out in white and shaded tones of rose-pink, blue, green and red and reserved on a ground of brilliant lemon-yellow ground finely engraved with dense sgraffiato feathery arabesques, the interior and base enamelled turquoise, the base inscribed in iron-red with a six-character seal mark within a white cartouche.

This vase was originally in the collection of Alberto Pasini (1826-99), one of the leading Italian Orientalist painters of the 19th century. Born in Busseto, Alberto Pasini studied in Parma and later moved to Paris, where he worked under the direction of the renowned painter Theodor Chasseriau (1819-1856). His fascination for foreign cultures led him to undertake numerous expeditions to the Middle East and Mediterranean before returning to Italy in 1870, when he settled at the Villa Rabaja in Turin. During his travels he acquired a varied collection of paintings and works of art, including this extraordinary vase. The collection was sold at the Scopinich Gallery in Milan in May 1929, where the vase was described as 'magnifico'. 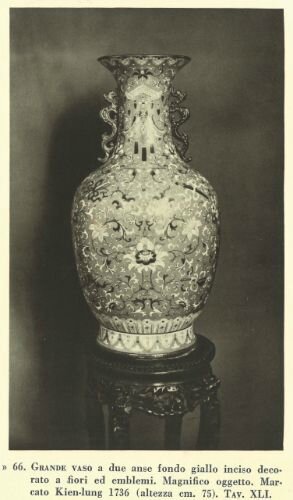 Catalogue image and entry from Galleria Scopinich, 10th May 1929, lot 66

The Qianlong Emperor (r. 1736-95) was arguably the greatest collector and patron of art in Chinese history. This magnificent vase, by far the largest recorded example of its type, belongs to a select group of pieces known as yangcai (foreign colour) porcelains that were made in the imperial kilns at Jingdezhen and are closely associated with the aesthetic taste of the Qianlong Emperor. In view of its exceptionally large size, its lavish ‘Flowers on Brocade’ design, and the unusual richness and variety of auspicious symbols, this magnificent vase may well have been made to please the Qianlong Emperor on a special occasion, such as an imperial birthday.

The term ‘yangcai’, used by the Emperor himself, acknowledges the technical exchanges with the West, here in particular Western-style floral compositions, the introduction of Western-style shading borrowed from painting, and the use of white pigment to depict highlights, which were first introduced to the Qing court by Jesuit artisans and in the Qianlong period, after repeated experiments, were successfully copied by imperial craftsmen. The present vase is a perfect example of yangcaiporcelain.

Among yangcai porcelain the Qianlong Emperor clearly favoured yellow-ground pieces such as the present vase over other colours, probably since the yellow colour was reserved for the imperial court and especially the emperor, and had been granted to the first of the Eight Banners of the Manchu army, the Orthodox Yellow Banner. According to court records from the second year of his reign (1737), the Emperor considered “palace bowls with yellow-ground foreign flowers” as particularly desirable and asked for more to be fired. In addition, he even required the shapes of celadon vases and blue and white lotus or dragon design jars of the Jiajing period (1522-1566) to be copied with the decoration of those yellow-ground yangcaibowls; for example, see The All Complete Qianlong: the Aesthetic Tastes of the Qing Emperor Gaozong, Taipei, 2013, cat. no. II-3.28 (fig. 1). In 1742, the Qianlong Emperor had a newly composed poem inscribed in black on a yellow-ground yangcaivase made in Jingdezhen for his purpose, which states that “Guan and Ru wares [from the official kilns of the Song dynasty] are celebrated and outstanding, but [my] new vase is of a better manufacture”; see Liao Pao Show ed., Stunning Decorative Porcelains from the Ch'ien-lung Reign, National Palace Museum, Taipei, 2008, cat. no. 20 (fig. 2). Wall vase in yangcai enamels with an imperial poem, mark and period of Qianlong © Collection of National Palace Museum

The rich repertoire of motifs here displayed is set on an overall background design of most delicate scrollwork engraved with a needlepoint, which required remarkable skill and labour to execute and conveys an impression of rich brocade. It appeared and became popular in the Qianlong period, reflecting the Emperor’s passion for lavish and rich decorations, who indeed called it Jin Shang Tian Hua or Flowers on Brocade. While peaches and Western-style flowers are common on other Qianlong porcelains, it is extremely rare to see peaches, symbolising longevity, growing out of blossoms as seen on the present vase.

The decorative scheme of this vase is remarkable for the large number of Chinese auspicious symbols it includes. Some are commonly seen on Qing imperial porcelain, such as the wan or swastika emblem. The chime (qing) and the fish (yu) are respectively homophonous with the words for celebration and abundance, and together form the pun Ji Qing You Yu(Abundance of Auspiciousness and Celebrations). A similar pun is incorporated in the decoration of pairs of pink and turquoise-ground yangcai bottles in the National Palace Museum, Taipei, although on those vases the chimes are depicted much simpler and the fishes less lively (ibid., cat. nos. 30-31).

Even more unusual are the emblems of the Eight Daoist Immortals that are closely related to longevity, which are fairly common on Ming and Qing porcelains, but rare on yangcai porcelain of the Qianlong period. During the Daoguang reign (1821-50) porcelain dishes with the emblems of the Eight Immortals inside, grouped in four pairs, and yellow-ground designs outside were made for an imperial birthday, see Zhao Congyue ed., Porcelains with Inscription of Shendetang Collected by the Palace Museum, Beijing, 2014, pl. 2.

Yellow-ground yangcai porcelain commissioned for the Qianlong Emperor is extremely rare, and few examples have ever been sold at auction. A miniature vase with wide open flowers very similar to those on the present vase is illustrated in R.P. Marchant, ‘Some Interesting Pieces of Marked Ch’ing Porcelain’, Bulletin of the Oriental Ceramic Society of Hong Kong, no. 3, 1977-8, pls. 17-19, and in Regina Krahl, Chinese Ceramics from the Meiyintang Collection, London, 1994-2010, vol. 4, no. 1772, and was sold twice in these rooms, 8th April 2009, lot 1601, and 8th April 2013, lot 15 (see p. 42 left). A pair of double-gourd vases with a floral design was sold in Parke-Bernet Galleries, Inc., New York, Art Collection of the Late Mrs. Christian R. Holmes, 15th - 18th April 1942, lot 178, and in these rooms, 9th October 2012, lot 3014. Comparable examples from later periods are also extremely rare. A pair of Jiaqing period (1796-1820) yellow-ground covered jars with ovoid body and similar floral designs and Eight Immortals’ emblems, from the collection of General Sir Walter Fane (1828-85), was sold in our London rooms, 13th November 2002, lot 155. Another Jiaqing-marked vase with long neck and pear-shaped body and similar floral designs, from the collection of the 1st Baron Loch (Lord Loch of Drylaw, 1827-1900) and Alfred Morrison’s Fonthill Collection, was sold at Christie’s Hong Kong, 1st December 2010, lot 2981. A pair of Jiaqing-marked vases of comparable shape, with a yellow-ground floral design on the neck and turquoise chilong handles similar to the present vase, but painted with foreigners bearing tributes to the Qing court, was sold at Christie’s London, 15th May 2012, lot 318.

The present vase, while unique, is closely related to other forms of court art, such as porcelain and metal wares decorated in falangcai enamels in the imperial workshops of the Forbidden City during the periods of Kangxi (1662-1722), Yongzheng (1723-35) and Qianlong, reflecting the intense cultural and technological interaction between China and Europe in the Qing dynasty. This phenomenon was the subject of several major exhibitions and research projects at the National Palace Museum, Taipei; see discussions by Liao Pao Show, op. cit.; Yu Pei-chin, Porcelain with Painted Enamels of Qing Yongzheng Period (1723-1735), Taipei, 2013, and Shih Chingfei, Radiant Luminance: The Painted Enamelware of the Qing Imperial Court, Taipei, 2012. A Qianlong-marked copper jar with yellow-ground enamel painting in the Palace Museum, Beijing, comparable to the present vase, was included in the exhibition Enamel Ware in the Ming & Ch'ing Dynasties, Taipei, 1999, cat. no. 124. (fig. 3).