'Painting Paradise: The Art of the Garden' exhibition on view at Buckingham Palace

'Painting Paradise: The Art of the Garden' exhibition on view at Buckingham Palace LONDON.- Whether a sacred sanctuary, a place for scientific study, a haven for the solitary thinker or a space for pure enjoyment and delight, gardens are where mankind and nature meet. A new exhibition at The Queen's Gallery, Buckingham Palace explores the many ways in which the garden has been celebrated in art through over 150 paintings, drawings, books, manuscripts and decorative arts from the Royal Collection, including some of the earliest and rarest surviving records of gardens and plants.

From spectacular paintings of epic royal landscapes to jewel-like manuscripts and delicate botanical studies, Painting Paradise: The Art of the Garden reveals the changing character of the garden and its enduring appeal for artists from the 16th to the early 20th century, including Leonardo da Vinci, Rembrandt van Rijn and Carl Fabergé.

The idea of an earthly paradise – an enclosed space with orchards, flowing water, shade and shelter – can be traced back to Persia in the 6th century BC. The painted miniature Seven Couples in a Garden, c.1510, from the earliest illustrated Islamic manuscript in the Royal Collection, shows a beautiful Persian garden with an octagonal pool, plane and cypress trees, and elaborately tiled pavilions laid with floral carpets. Before the 15th century, most European images of gardens appeared in illuminated religious manuscripts. The Book of Genesis, with its references to the Tree of Life, Tree of Knowledge and Four Rivers, provided a framework for artists to create images of Eden, as in Hartmann Schedel's woodcut of 1493. In Adam and Eve in the Garden of Eden, 1615, Jan Brueghel the Elder relegates the main protagonists and the Tree of Knowledge to the middle distance in an abundant woodland landscape rich in flora and fauna. As court painter to the Habsburg Archdukes Albert and Isabella, Breughel was able to study botanical specimens in the palace garden in Brussels. 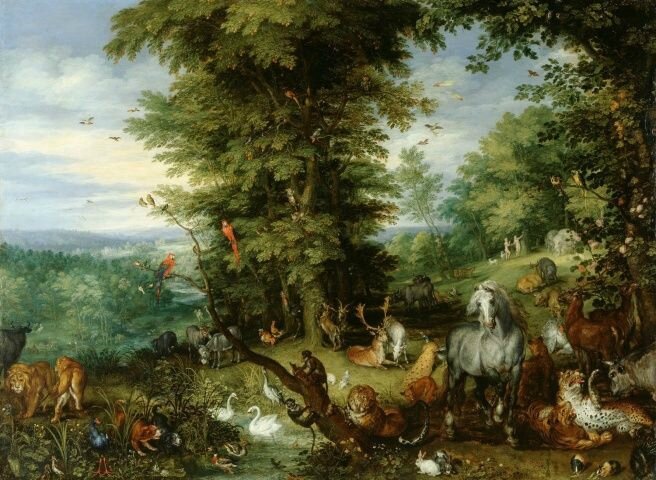 Until the 16th century, gardens in paintings and manuscripts remained largely those of the imagination. Henry VIII's Great Garden at Whitehall Palace, seen in the background of the painting The Family of Henry VIII, c.1545, is the first real garden recorded in British art. By the Renaissance, gardens had become status symbols to be employed in royal propaganda. The wealth of a garden's owner could be demonstrated through elaborate horticultural features such as obelisks, pergolas, knot designs and topiary. Although in the painting Pleasure Garden with a Maze by Lodewijk Toeput (Pozzoserrato), c.1579–84, the water labyrinth is the artist's invention, it is inspired by contemporary descriptions of 16th-century Italian formal gardens. By the 17th century, aristocratic gardens were created on a previously unimaginable scale. The intense rivalry between the French and English kings, Louis XIV and William III, produced two of the largest and most elaborate royal gardens ever made. The exhibition includes a panoramic view by Jean-Baptiste Martin of the French king's gardens at Versailles, c.1700, and A View of Hampton Court, by Leonard Knyff, c.1702–14, the greatest surviving Baroque painting of an English garden. With their amphitheatres, cascades and fountains, statuary, exotic birds and aviaries, Baroque gardens offered much to engage artists. The only surviving pair of sundials by the great 17th-century horologist, Thomas Tompion, are shown in the exhibition. The fashion for parterres (ornamental flower gardens) is reflected in An Exact Prospect of Hampton Court, an etching by Sutton Nicholls, c.1700, while a view of Bushy Park water gardens by the studio of Marco Ricci, c.1715, shows a large cascade, a rare feature in an English landscape. By the 18th century, gardens took on a more natural, informal style, inspired in part by the poet John Milton's romantic description of a wild and untamed Eden in Paradise Lost, 1667. An oil painting of Kew by the Swiss artist Johan Jacob Schalch, 1759, is from a series of views of the gardens designed for Frederick, Prince of Wales by William Kent and William Chambers. The distant pagoda is the only obvious sign of human intervention among the gently sloping hills, grazing sheep and lake. In the 19th century the garden became a symbol of wholesome and virtuous family life, and a necessary ingredient of ordered domestic harmony. In a portrait of Queen Victoria and Prince Albert by Edwin Landseer, commissioned only two months after their marriage in 1840, the royal couple are set against a view of the East Terrace garden at Windsor Castle. William Leighton Leitch's 1855 watercolour of the Swiss Cottage, created by Prince Albert for his children in the garden of Osborne House, reflects the informal and private existence enjoyed by the family on the Isle of Wight. The 16th and early 17th centuries saw the birth of botanical illustration, florilegia (flower books) and still-life painting. Leonardo da Vinci was the first artist to produce true botanical studies, and the exhibition includes a number of exquisite examples by the artist. The only surviving painted flower book from 17th-century England is by the English gardener and botanical artist Alexander Marshal. Produced over a period of 30 years, it includes rare specimens, such as Auriculas (Primula x pubescens), grown only in the finest gardens of the time. 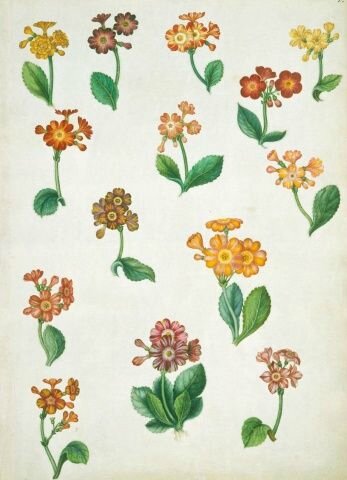 Flower designs on porcelain, silver, furniture and textiles, such as the vine-covered tapestry of a pergola by Jacob Wauters, c.1650, brought the garden inside the home. In the 19th century, the 'language of flowers' was translated into precious luxury items, such as the brooch presented by Prince Albert to Queen Victoria in celebration of their betrothal in 1839. In the form of orange blossom, symbolising chastity, it was the first of a suite of flower jewellery given to the Queen over several years. The skill of replicating the charm and beauty of flowers in three-dimensional objects reached new heights in the workshops of Carl Fabergé, the great Russian jeweller and goldsmith. Fabergé's Bleeding Heart, c.1900, carved in nephrite, rhodonite and quartzite, has its flowers suspended from gold stems, so that they can move gently, as if blown by the wind. 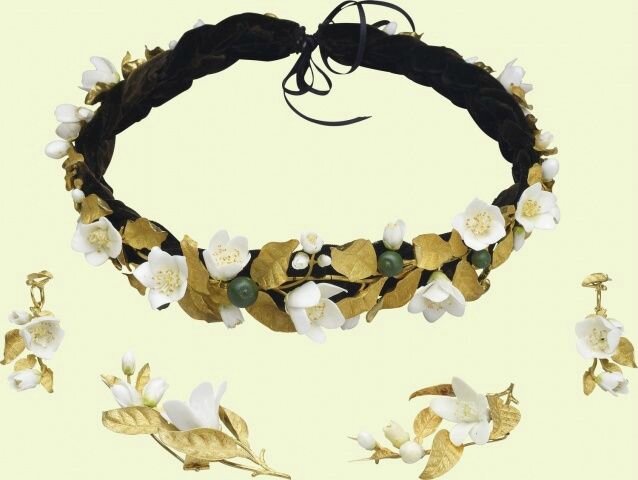 Commentaires sur 'Painting Paradise: The Art of the Garden' exhibition on view at Buckingham Palace