LONDON.- Sotheby’s Arts of the Islamic World auction in London on 22 April 2015 will feature exquisite and important manuscripts in Arabic, Persian and Turkish alongside paintings, ceramics, metalwork and jewellery from the Middle East, India and the wider Islamic World. The sale is led by a leaf from the legendary manuscript commonly known as the 'Blue Qur'an', named after the rich blue hue of its indigo-dyed vellum. When complete it would have been one of the most luxurious early-medieval manuscripts produced in the Islamic world. The auction will open with a never-before-offered private collection of 49 objects assembled in Alexandria at the dawn of the 20th-Century, a time when the city was one of the great hubs of creativity and collecting.

Benedict Carter, Sotheby’s Head of Auction Sales, Middle East Department, commented: “We’re delighted to offer such a broad spectrum of rare and fresh-to-the-market objects to both institutional and private collectors. The sale features some particularly fine Qu’ranic manuscripts as well as ground-breaking secular works such as Tabari’s 10th-century medical encyclopaedia. We are also excited to offer an exceptional French private collection of 49 objects, largely unseen on the market for the past century.

A French Private Collection Combined estimate: £282,000-403,000
This private collection of forty-nine lots was originally formed by the father of the present owner in Alexandria in the early twentieth century. At that time Alexandria, once called “the first city of the civilized world” by Diodorus Siculus, was a hub of creativity in the spheres of art, literature and poetry. This was the city of Lawrence Durrell’s Alexandria Quartet, the poet Constantine Cavafy, the artist brothers Seif and Adham Wanly and the British novelist E.M. Forster (who published A Guide to Alexandria in 1922).

These figures, and others like them, ensured the city’s place in history as one of the most cosmopolitan centres of the early twentieth century. This artistic and intellectual atmosphere also fostered a culture of collecting that gave us some of the century’s most famous names in the field. The Greek-Alexandrines Anthony Benaki, whose collection would become the Benaki Museum in Athens, Fernand Adda, who amassed a collection of over two hundred Iznik wares sold in Paris in 1965, and Stefanos Lagonikos, whose collection of Iznik was eventually sold through Sotheby’s Monaco in 1991, were at the epicentre of this enthusiasm and trade in Islamic pieces. The Exposition d’Art Musulman, organised by Les Amis de l’Art, was held in Alexandria in March 1925, and was the second greatest exhibition of arts of the Islamic World after the Munich Exhibition of 1910. A leaf from an exceptional manuscript commonly known as the Blue Qur'an, when complete it must have been one of the most luxurious manuscripts ever produced in the early medieval period of the Islamic world. Other examples of dyed vellum are known, but rare, and yellow was the more usual choice of colour. Blue was probably symbolic as well as merely luxurious and it is probable that the blue vellum and gold script together were meant to rival the most luxurious manuscripts of the Byzantine Empire, which were dyed blue or purple.

The exact origins of the Blue Qur'an are unknown but a number of theories have been put forward over the last century; some scholars believe its origins lie in Qairawan, Tunisia, while others have suggested it was produced in Córdoba, Spain. If its origins remain elusive, it is universally agreed that it is a startlingly luxurious example of early Islamic manuscript production, whose patron must have been a ruler of enormous wealth and ambition, and that it was one of the most important manuscripts of the Qur'an produced in the medieval Arab world. This folio is an example of one of the most striking and almost ethereal Qur'anic scripts ever produced. It originates from a Qur'an of majestic elegance and breath-taking graphic power, and the decoration of the background of the entire text area throughout the manuscript marks it out as one of the most intricately-designed Qur'ans of the medieval period. The original manuscript was produced in thirty volumes, each containing around seventy-five leaves, giving a total of approximately 2,250 leaves. It must have been a truly majestic sight. 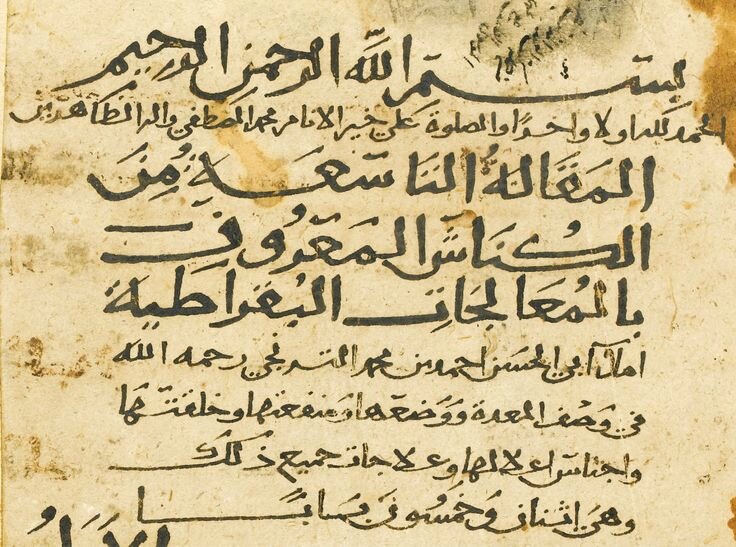 This rare and important Buyid medical manuscript written shortly after the death of the author Al-Tabari, a court physician to the Buyid ruler Rukn al-Dawlah (r.932-76 AD) in Ray, Western Persia. Savage-Smith describes Kitab al-Mu’alajat al-Buqratiyyah as a “comprehensive textbook of medicine in ten chapters. The opening section on principles of medicine includes a fragment of Galen’s treatise on ethics which is lost in the Greek original”. The text comprises chapters IX and X of the original ten, and can be considered one of the earliest known copies of the work. This magnificent coat is a rare survivor of Sogdian silk production, evoking the wealth and luxury of the Silk Road. Characterised by a rich and broad crosscultural mix, germinated at the crossroads of China, Central Asia and Persia, this robe plays an important part in our understanding of a nomadic civilisation in which wealth had to be transportable, leading to a fascinating fusion of artistic influences.

Sogdian silk manufacture was highly influenced by trade with China, whilst the decorative motifs were often derived from Sasanian models from Persia. The horned deer and winged horses which populate this robe would have originally been mythologically symbolic. 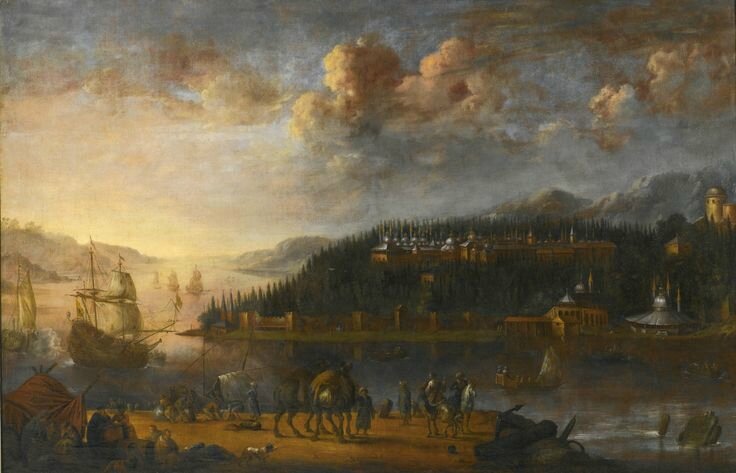 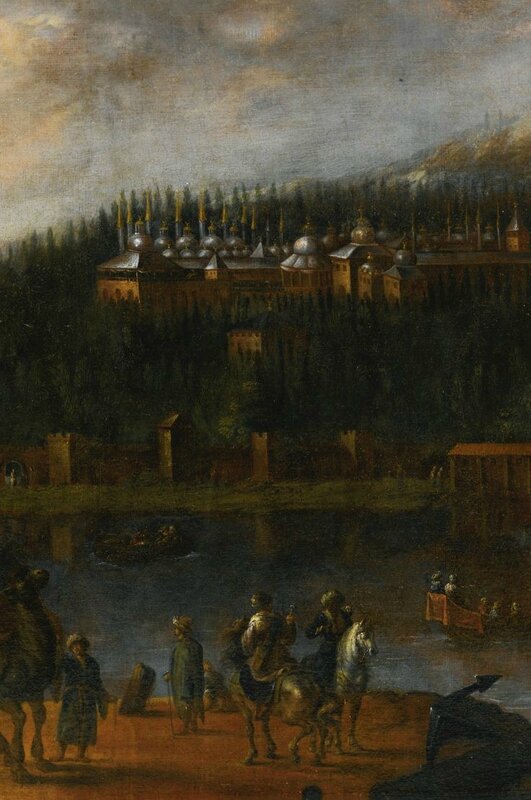 The painting is one of the earliest European depictions of the Topkapi Palace, the primary residence of the Ottoman sultans for almost four hundred years (1465-1856). It reflects the ongoing interest of the 17th-century European elite in the Ottoman world, and its ruling dynasty. An imperial architectural complex comprising various secular and religious buildings, the Topkapi palace has been depicted here with extreme attention to detail. The Baghdad Pavilion, Sultan Ibrahim's Gazebo and the circumcision chamber are clearly visible among the main buildings of the palace, which are surrounded by trees. At the left of the painting can be seen the tip of Kadikoy district, with the sea of Marmara and the Uludag mountains in the background. 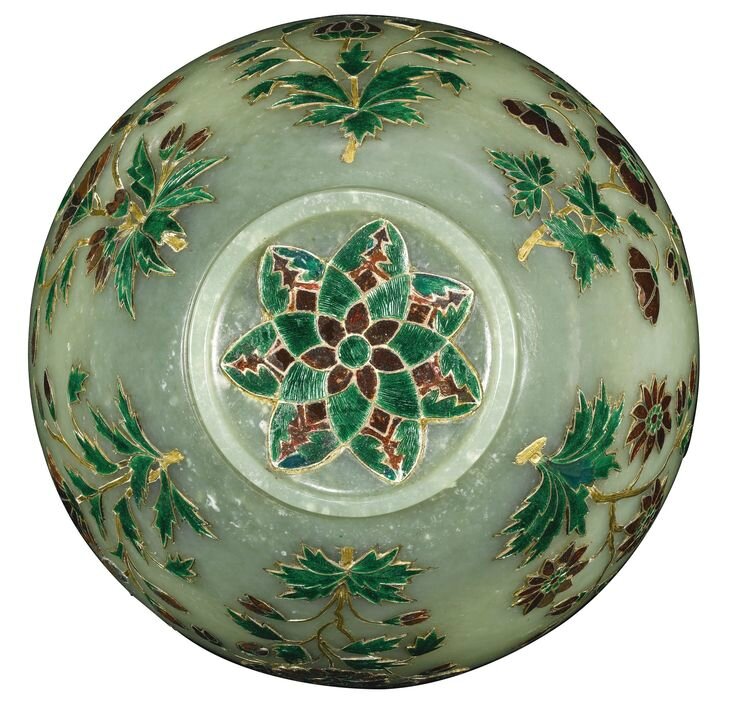 Decorated with bright red and green enamelled floral stems rendered with a natural vitality, the bowl is evocative of the skill and creativity of Indian jewellers working with enamels. Originally introduced into India by European jewellers, the enamelling technique was quickly taken up by local craftsmen, spreading throughout the Subcontinent in the sixteenth and seventeenth century.