An inquiring mind: American collecting of Japanese and Korean art at Christie's

An inquiring mind: American collecting of Japanese and Korean art at Christie's NEW YORK, NY.- On April 22, Christie's will offer An Inquiring Mind: American Collecting of Japanese and Korean Art, a selection of 130 works mainly from illustrious private and public collections. This rich and varied sale, with estimates ranging from $1,500 up to $600,000 includes works of antiquity, screens, paintings, ceramics, prints and sculpture. Leading the sale is a pair of recently discovered screens attributed to Hasegawa Tohaku—one of the most influential artists from the Momoyama period. The pre-sale exhibition at Christie’s New York begins from 18 to 21 April.

The Japanese section will feature Willows and Uji River, a pair of screens attributed to Hasegawa Tohaku (1539-1610), whose seals appear on this pair of screens (estimate: $600,000-800,000). One of the great painters of the Momoyama period, his patrons were the wealthy temples and mighty warlords controlling Kyoto. Scholars point out that the effect this pair with its shimmering gold leaf must have illuminated a darkened castle interior. 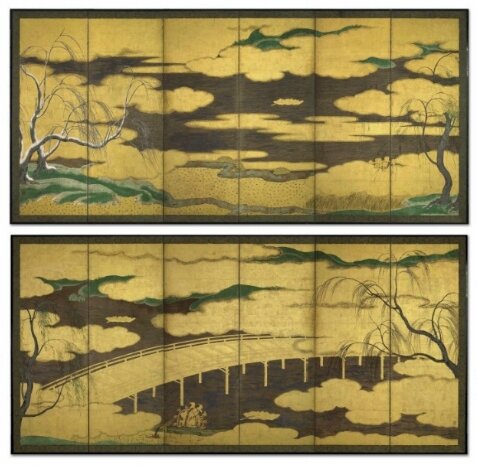 Notes: Hasegawa Tohaku, whose seals appear on this pair of screens, is known to us all for his masterpiece, Pines in Mist, in the Tokyo National Museum. One of the great painters of the Momoyama period, his patrons were the wealthy temples and mighty warlords controlling Kyoto. An iconic subject associated with him and his sons Sotaku and Soya is Willow and Uji River, with the great bridge at Uji.
There are two versions of this subject. The first, and most common composition, produced in great numbers, shows the bridge stretching across both screens. The pair of Uji Bridge screens in the Kosetsu Museum of Art, Kobe, with Tohaku’s seals, dates to around 1600. It is the earliest pair that can be attributed to a specific artist. We can assume that Tohaku originated the imagery. A similar pair with the seal of Tohaku’s second son, Sotaku, is in the Gumma Prefectural Museum of Modern Art. Examples of that same composition are found in a number of American collections, including the Minneapolis Institute of Arts; the Nelson-Atkins Museum of Art, Kansas City; the Burke Collection in The Metropolitan Museum of Art; and the Art Institute of Chicago. The Chicago screens bear the seals of Tohaku’s son Hasegawa Soya (1590–1667).
The second, and probably earlier, version of the Uji theme has the bridge on the right screen only. Three examples are known: the newly discovered pair shown here with the seals of Hasegawa Tohaku; a much published pair in the Idemitsu Museum of Arts, Tokyo (possibly an anitiquarian recreation of an earlier image); and another in the Sumitomo Collection, Kyoto.
The river rushes from left to right, but the four seasons unfold sequentially from right to left. The willow at the far right edge of the right screen leans in seductively, seeming to point toward the bridge. It displays the delicate, tender leaves of early spring. A large waterwheel decants water into flooded rice paddies through a bamboo trough stretching across a riverside path. Two willows at the center, where the screens meet, have the more developed, lush foliage of summer. On the left screen, autumn sets in; the river is calm and the waterwheel no longer moves. Tall autumn grasses sway in the wind. Along the edge of the river, three bamboo baskets filled with stones protect the shoreline from soil erosion. To signal winter, snow weighs down two willows at the far left of the left screen. The harvested paddies are now barren. On the river, three boats laden with brushwood suggest poetic imagery going back to earliest times and evoke the loneliness of unrequited love:

Although I do not know
The Harbor of departing spring
[I do know] the brushwood boats of Uji
Floating in the mist.

As Melinda Takeuchi has pointed out, Uji was a site of Pure Land Buddhist temples and religious retreat since the eleventh century. It featured prominently in the last ten chapters (the “Uji chapters”) of The Tale of Genji, a site of both romance and deep sorrow. The golden bridge, its beginning and end obscured by bands of mist, may connote passage to the “other shore,” transition between life and death—a golden link to paradise. Be that as it may, the effect of shimmering gold leaf, together with the now tarnished silver of the waves, is at once awesome and calming. Surely the painting must have illuminated a darkened castle interior with a spiritual glow, an effect some may feel even today.

Among the armor collection, the most extravagant of Edo-period daimyo armors is a red-laced armor with two-piece cuirass (aka-odoshi nimai-do gusoku) together with saddle and accessories, 18th century (estimate: $180,000-220,000). This piece has the highest quality red-laced components and rich metalwork of sculpted silver fittings. It is rare for an armor to be accompanied by so many fine accessories, including the highest quality armor surcoat (jinbaori). The saddle and horse trimmings are also of finest quality and together with the armor evoke a vision of councilors riding in procession with hundreds or perhaps even thousands of retainers to and from Edo Castle. 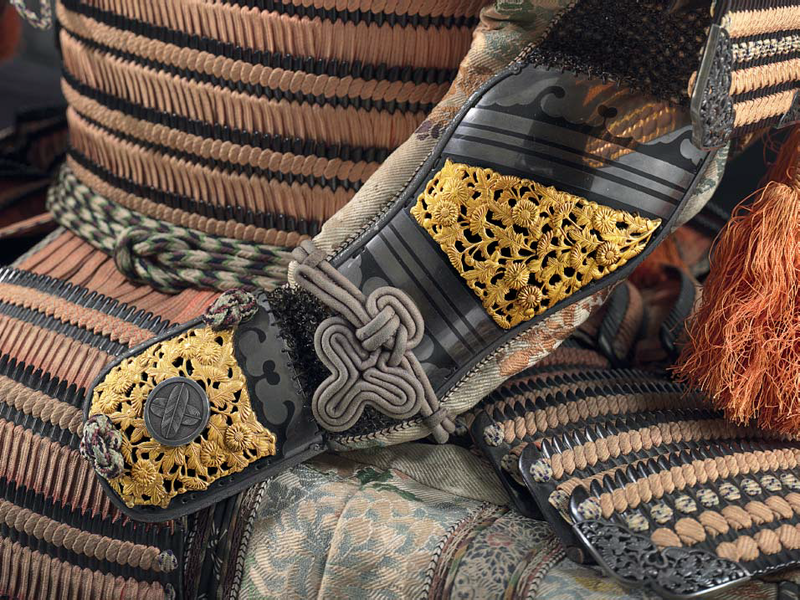 Helmet [kabuto]:
a thirty-plate black-lacquered iron riveted helmet (hoshi-bachi), the ridges (suji) with silver edging (fukurin), the aperture at the crown with a five-tier gilt and silver chrysanthemum surround, to the front a broad silver plate deeply engraved with stylized clouds and with three silver and gilt arrow-shaped pendants (shinodare) with a punched 'fish-roe' ground (nanako-ji), to the rear a matching plate with two arrow-shape pendants, the brim (mabisashi) black-lacquered with silver inlaid cloud shapes and with silver edging, silver fore-crest fixture pierced and roundly carved with chrysanthemum leaves and blossoms with central roundel engraved with a crossed hawk's feathers badge (mon), gilt pair of stylized horns (kuwagata), forecrest of a dragon of red and gilt wood, neck guard (shikoro) of four tiers of close-laced black-lacquered individual scales with silver fittings, the two turned-back sections (fukigaeshi) each lacquered black with inlaid silver clouds and gilt sun-discs

Sleeves and shoulder guards [kote and sode]:
sleeves of Yoshitsune-gote style (old copy of the National Treasure pair in the Kasuga Shrine once said to have belonged to Minamoto-no-Yoshitsune (1159 - 1189)) with arm, elbow, and hand pieces of silver inlay on a black-lacquered ground, and gilt pieces pierced and carved richly with chrysanthemums, waves, and butterflies, the hand covers with silver hawk's feathers badges, all joined with chain mail and sewn onto embroidered silk, shoulder guards (sode) of six tiers of laced scales with silver fittings and silver crossed hawk's feathers badges

Notes: Among the most sumptuous of Edo-period daimyo armors, this fine piece has the highest quality red-laced components and rich metalwork of sculpted silver fittings. The sleeves are based on the National Treasure pair of'Yoshitsune-gote' in the collection of Kasuga Shrine, said to date from the Kamakura period (1185-1333) and the lower leg guards are also of ancient form adhering to the shape of the leg. The breast pendant sendan-no-ita and kyubi-no-ita are also of the type used on the O-yoroi ('great harness') of the Heian and Kamakura periods. The distinctive silver roundels with crossed hawk's feathers are the badges (mon) of the ancient Abe clan and their branches, became prominent in Japan during the Edo period. The family served as Elder Councillors (Roju) to the Tokugawa shoguns from the time of Abe Tadaaki (1633 - 1671) until the time of Abe Masahiro (1819 -1857) during the last days of the shogunate.
Since the family was so close to the Tokugawas, the two tasuki silk straps with the Tokugawa mon might safely be assumed to have been a gift from the shogun .
It is rare for an armor to be accompanied by so many fine accessories, including the highest quality armor surcoat (jinbaori). The saddle and horse appurtenances are also of finest quality and together with the armor evoke a vision of one of the Abe elder councilors riding in procession with hundreds or perhaps even thousands of retainers to and from Edo Castle.

The Korean portion of the sale is highlighted by a rare hanging scroll of Gathering of Low-ranking Officials in the Five Bureaus, (estimate: $300,000-400,000) from the first half 16th century, recently discovered in a Japanese collection; an eight-panel screen of Orchid and Rocks by Mongha Geosa (19th century) (estimate: $30,000-40,000), reputedly formally in the collection of the last Empress, Sungjeong Yoon (1894-1966); and a small gilt-bronze container from the Unified Silla-Goryeo dynasty (10th century) (estimate: $5,000-7,000). 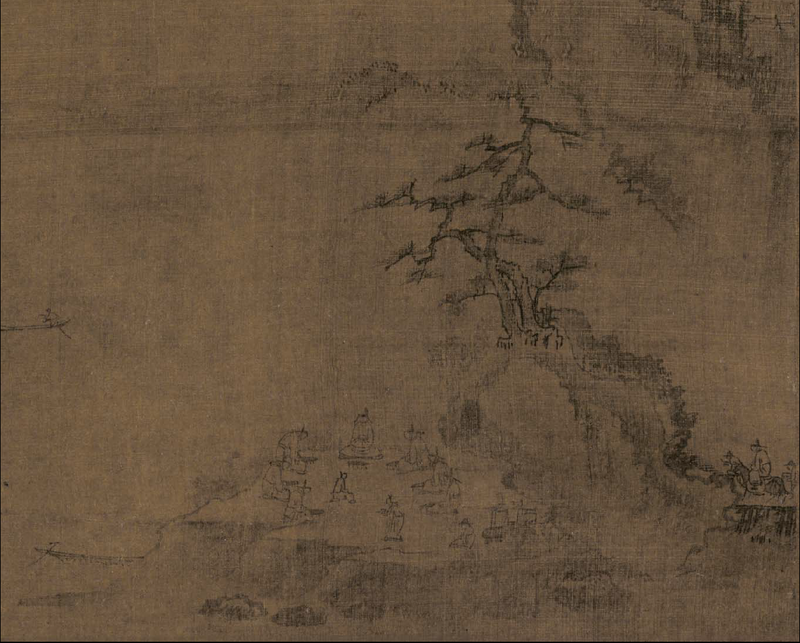 Notes: The subject of this rare painting, recently discovered in a Japanese collection, is a gathering of ten officials in an idyllic setting on a bluff overlooking a lake or a large river. The right edge of the painting is trimmed, so that only eight of the ten are mentioned in the list of attendees inscribed below. The final character of the title, at the top, is cropped. These gentlemen are chambong, and their rank is 9-b, pretty much at the bottom of officialdom. In the Joseon dynasty, there were civil and military officials ranging in rank from 9-b (the lowest) to 1-a. Records relating to two of the attendees listed here indicate that the painting dates before 1548.

The painting is in the style of An Gyeon (active ca. 1440-70), but differs from others of the period in that it has fewer landscape elements. While there are a few examples of similar paintings with officials ranked 5-a, the present work highlights the fact that even those lower in rank took care to document their important gatherings with a painting. On this occasion, one of the ten officials inscribed a poem to the left of the landscape. The poem mentions that the ten of them got together on a peaceful and beautiful day. They sang songs and composed poems. Some came to the gathering riding donkeys. The poem concludes by noting that this pictorial record was commissioned to commemorate a singularly happy event.