A blue and white circular box and cover, Wanli Mark And Period

A blue and white circular box and cover, Wanli Mark And Period 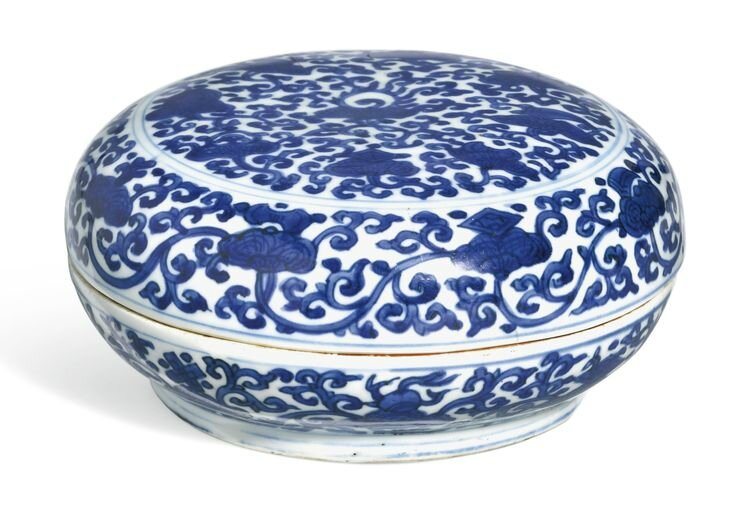 the exterior of the cover painted with a 'flaming pearl' supported on a stylized blossom surrounded by blossoms supporting the 'Eight Daoist symbols' (babao) and repeated on the sides of the cover and box, the base inscribed with a six-character mark in underglaze-blue within a double circle; 15cm., 5 7/8 in.

Notes: Finely painted with the Eight Daoist symbols (babao) above lingzhi sprays, this box closely follows Jiajing mark and period originals, such as a box from the Raoul Wallenberg collection, included in the exhibition Ming Blue-And-White, Ostasiatiska Museet, Stockholm, 1964, cat. no. 55, sold in these rooms in 1974, and at Christie’s New York in 1981, 1985, 1988 and again, 1st June 1990, lot 205.

A closely related box was sold in our Hong Kong rooms, 16th May 1989, lot 122; and another was sold in our New York rooms, 18th March 2014, lot 237. See also a rectangular pierced box, painted with a related lingzhi scroll supporting the Buddhistbajixiang symbols enclosed in a lobed cartouche, also from the collection of Raoul Wallenberg, included ibid.,cat. no. 69, and sold in these rooms, 2nd/3rd December 1974, lot 278.

This motif is also known on Wanli mark and period boxes decorated in the wucai palette; compare a slightly smaller circular box sold in our Hong Kong rooms in 1978, in our Los Angeles rooms in 1980, and again in our Hong Kong rooms, 17th May 1988, lot 147; and a rectangular box in the Holger Lauritzen collection, illustrated in Jan Wirgin, ‘Ming Porcelain in the Lauritzen Collection’, BMFEA, no. 37, Stockholm, 1965, pl. 34.