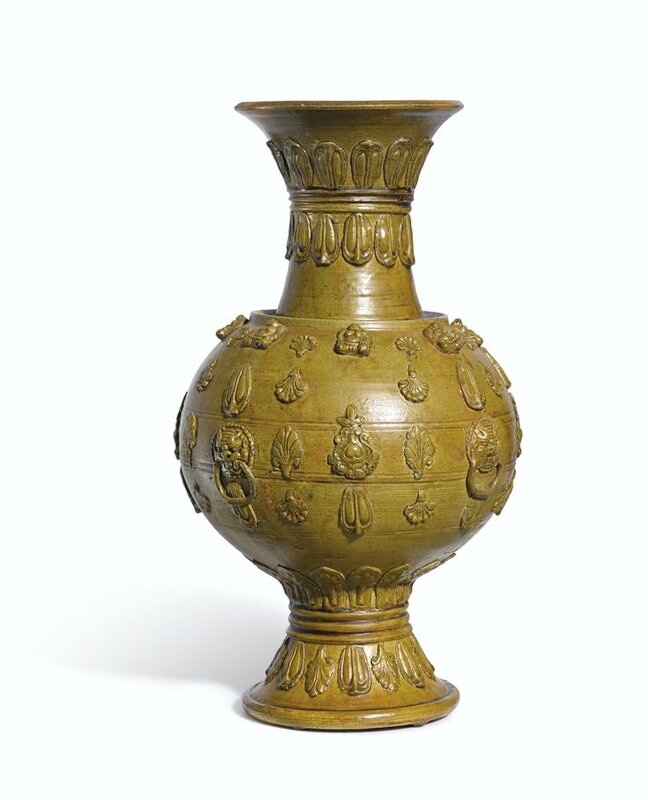 the globular body rising from a tall spreading foot to stepped shoulders, surmounted by a trumpet neck flaring at the rim, the exterior applied with bands of moulded animal masks suspending mock rings and seated spirits, interspersed between stylized palmettes and single lotus lappets, all above a band of lappets, the neck encircled by raised fillets between two bands of lotus lappets, the foot similarly decorated with raised fillets above a band of lotus lappets alternating with palmettes, applied overall with an amber-coloured glaze pooling at the recesses to a deeper ochre tone and coagulating just above the foot, Japanese wood box. Quantité: 2

Notes: Elegantly potted and finely decorated, the present vase is covered with a glaze that is beautiful and elegant like amber. Both its form and amber glaze are extremely rare and it appears to be unique. In form as well as in its lotus-lappet decoration, it is comparable to the so-called ‘lotus vases’ of baluster form that are a characteristic vessel type of the Southern and Northern Dynasties period (420-589). These demonstrated the strong influence of Buddhism that was quickly gaining popularity across China at this time of political turmoil and cultural exchange. However, the present piece differs from most “lotus vases” in that it is covered by a low-temperature lead-glaze, while the latter usually feature a high-temperature celadon glaze, which makes this vase particularly special and valuable.

Three lead-glazed vases of very similar form, but applied with face motifs instead of moulded animal masks suspending mock rings, were sold at Eskenazi Ltd., London, one now in the Metropolitan Museum of Art, New York, the second preserved in a private collection of art from the Six Dynasties period (220-581), the third in The T.T. Tsui Galleries of Chinese Art at the Royal Ontario Museum, Toronto; see Giuseppe Eskenazi and Hajni Elias, A Dealer’s Hand. The Chinese Art World Through the Eyes of Giuseppe Eskenazi, London, 2012, p. 163, fig. 153, and pl. 199, for images of the second and third vases; the third vase was sold in these rooms, 9th June 1992, lot 92, and is also illustrated in Royal Ontario Museum. The T.T. Tsui Galleries of Chinese Art, Royal Ontario Museum, Toronto, 1996, pl. 60 (Fig.1). The Tsui Museum of Art, Hong Kong, also once had a vase of that type, nearly identical to the Ontario piece, perhaps the vase now in the Metropolitan Museum of Art, see The Tsui Museum of Art, Hong Kong, 1991, cat. no. 8, and The Tsui Museum of Art. Chinese Ceramics I: Neolithic to Liao, Hong Kong, 1993, pl. 63. See also another vase of the same shape, decorated with only nine moulded animal masks suspending mock rings, but otherwise undecorated, excavated from the tomb of Zhang Sheng (AD 595) of the Sui dynasty, in Anyang, Henan, and now in Henan Province Museum, published in Zhongguo chutu ciqi quanji [Complete Collection of Ceramic Art Unearthed in China], Beijing, 2008, Henan volume, pl. 31. Compare also a lead-glazed vase with similar moulded animal masks and comparable shape, but less well-proportioned than the present piece and with a shorter neck, excavated from the tomb of Xu Xianxiu (AD 571), Prince Wu’an of the Northern Qi dynasty (550-577), in Taiyuan, Shanxi, illustrated ibid., Shanxi volume, pl. 20 (Fig.2). The moulded decorations on the present piece are commonly found adorning other vessel forms excavated from tombs of nobility and high-ranking officials from the same period in Northern China. For example, see a lead-glazed vase with a cover, decorated with similar lotus lappets, discovered in the Northern Qi tomb of Prince Shunyang, Kudi Huiluo (AD 562) and his wife, in Shouyang, Shanxi, illustrated ibid., pl. 10. Compare also a chicken-head ewer with dragon handle, decorated with stylised honeysuckle, and a low-foot vase decorated with animal masks suspending mock rings, both excavated from the tomb of Lou Rui (AD 570), Prince Dong'an of the Northern Qi in Taiyuan, Shanxi, illustrated ibid., pls 16-17 (Fig.3). Chicken-head ewer with dragon handle from the tomb of Lou Rui  (AD 570), Prince Dong'an of the Northern Qi in Taiyuan, Shanxi.

A vase excavated in Zibo, Shandong, of related shape and similar decorations and glaze to the present piece, is published ibid., Shandong volume, pl. 35 (Fig. 4). This lotus vase from Zibo is commonly believed to be covered with a high-temperature celadon glaze, but Hsie Mingliang from National Taiwan University has argued that it should be a low-temperature lead-glaze, see Zhongguo gudai qian youtao de shijie: Cong Zhanguo dao Tangdai [The World of Ancient Chinese Lead-Glazed Wares: From the Warring States to the Tang], Taipei, 2014, p. 75. Such debates have profound implications on the study of celadon-glazed wares as well as the origin and development of low-temperature lead-glazed Tang sancai (three-coloured) wares in Northern China.  As a lead-glazed vase the present vase offers important clues in these studies. For further discussions on the subject, see Suzanne G. Valenstein, A Handbook of Chinese Ceramics, Metropolitan Museum of Art, New York, 1989, p. 51-54.