For the first time in Europe, the work Concetto spaziale, Trinità [Spatial Concept, Trinity] is being exhibited as Fontana himself planned in a number of drawings from 1966, but never saw realised. The fulfilment of this desire is the tribute the two Foundations want to dedicate to the artist.

Concetto spaziale, Trinità (1966) is an impressive example of Fontana’s work, not only in terms of size (each of the three elements measures 2 x 2 metres) but also in its glossy, rigorous composition, whose monochrome white purity refers to a dimension of infinity.

Punctuated by lines of holes that signify an elementary gesturalism, the triptych represents the artist’s highly personal, secular and poetic reflection on the absolute.

The staging of the work, designed by Fontana in drawings from 1966 (also on show for this occasion) has been faithfully adhered to.

The monochrome canvases, emphasised by blue plastic sheeting, are hung from ceiling height and enclosed in a theatrical seventeen-metre setting, a reference to a dimension of absolute purity and spatiality. 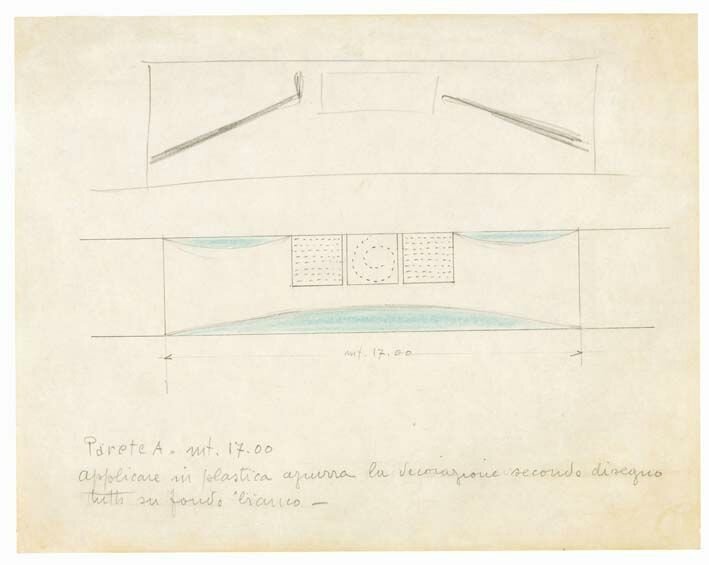 A further group of works created between 1951 and 1968 completes the tribute to the artist and gives some idea of his broad creativity, which ranged from figuration to extreme abstraction in a constant experimentation with the potential of new materials and techniques. 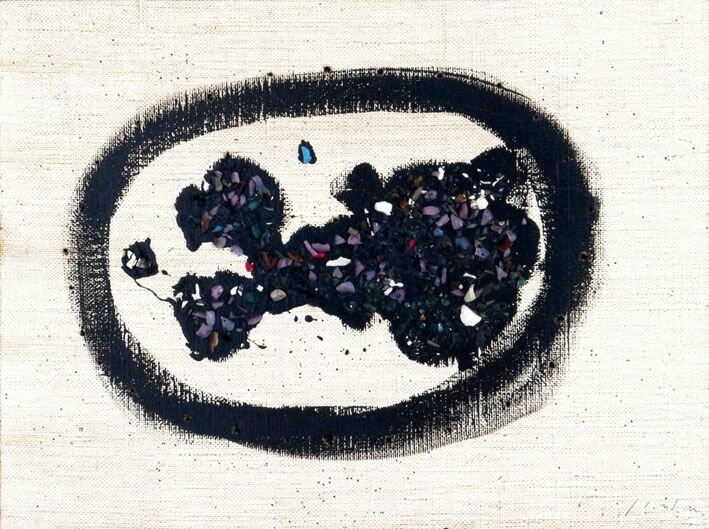 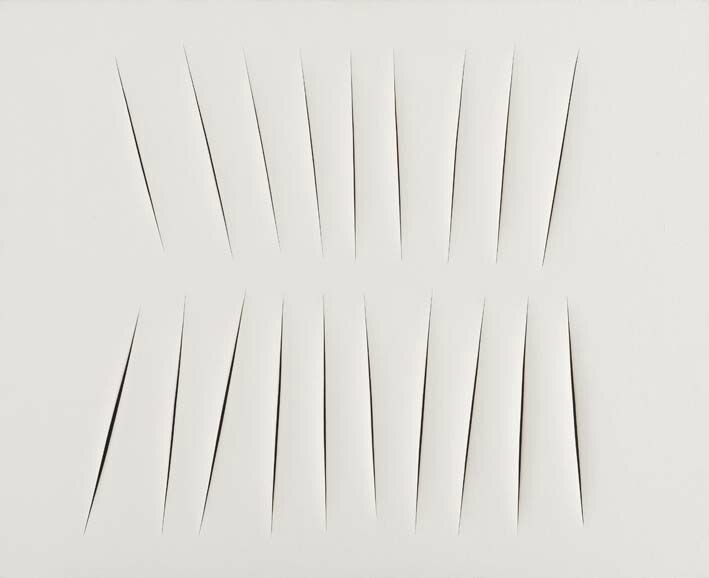 Born in 1899 in Rosario, Santa Fe to Italian parents, after completing his studies in Italy, Fontana returned to Argentina and began to devote himself to sculpture, which included working with his father, a sculptor and architect, in the construction of cemetery memorials. The first exhibition of his work – the study of a female face – was in 1925 at the Salon de Bellas Artes in Rosario. In 1927 he returned to Milan and enrolled at the Accademia di Belle Arti di Brera, where he studied under Adolfo Wildt. His first results were characterised by a rough, vibrant plasticity, but from about 1930, he began to produce entirely new work.

In the same year he took part in the Venice Biennale and began exhibiting regularly at the Galleria del Milione in Milan, where he held his first solo exhibition in 1931, curated by Edoardo Persico.

During these years, he joined the Lombardy group of abstract artists and the international movement Abstraction-Création.

In 1939 he again moved back to Argentina, where in 1946 he published the Manifiesto blanco, which laid the foundations for spatialism, a direction he fully developed after his return to Italy in 1947. The first Spatialist Manifesto appeared in December of that year, signed by Giorgio Kaisserlian, Beniamino Joppolo and Milena Milani. In the following years, the aesthetics of spatialism was confirmed in a series of manifestos and policy statements, and found concrete expression in the works that Fontana exhibited at the1948 Venice Biennale and at the Galleria del Naviglio in 1949, where the first Ambiente spaziale [Spatial Environment] demonstrated the breaking of boundaries between painting, sculpture and architecture in order to conquer what Fontana called the “spatial concept of art”.

This was the period of the first “holes”, and the design of the looping tube of neon light, shown at the Milan Triennale in 1951. In the following years, Fontana’s extensive presence on the exhibition circuit culminated in a solo show at the 1958 Venice Biennale.

In 1959, the Galleria del Milione presented the new series of “cuts”, in which the clean, precise gesture of cutting the canvas opened it to an infinite spatial dimension.

Established by this point as one of the major protagonists of contemporary art, Fontana went on to develop new series of works: Nature, Quanta, Teatrini, Fine di Dio and Ambienti spaziali, in which his ideas continually found new directions until his death in 1968.

Of particular significance among the many retrospectives and anthological exhibitions dedicated to the artist were the five exhibitions held in Milan in 1999 to celebrate the centenary of his birth, curated by the leading experts on his work.

The most recent, major exhibitions of his work include the 2014 retrospective at the Musée d'Art Moderne de la Ville de Paris with over 200 sculptures, paintings, ceramics and installations from the 1920s to 1968, and the 2014-2015 Milan exhibition at the Museo del Novecento, organised in collaboration with the Fondazione Lucio Fontana, in which a new perspective has been explored: the parallel path Fontana and Yves Klein took between Paris and Milan in the years 1957-1962.