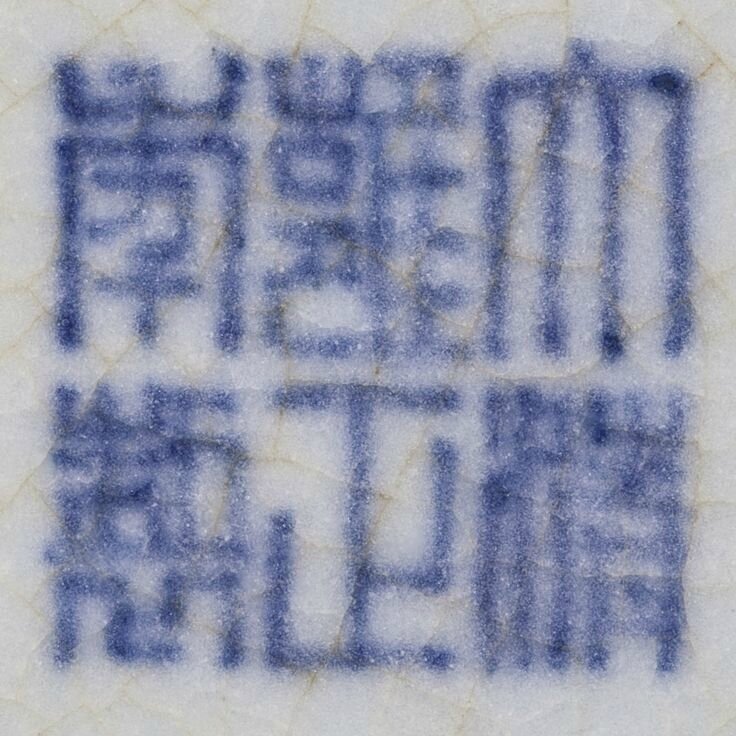 of rectangular form, the flared sides rising from a stepped foot to a flat everted rim, covered overall in a crackled lavender-blue glaze stopping neatly at the footring to reveal a brown body, the base with two circular apertures and inscribed with a six-character seal mark in underglaze-blue, wood stand and Japanese wood box. Quantité: 3

Note: The jardinière was a popular form of planter at the Qing court, as can be gleaned from various court paintings. A similar jardinière with four additional bracket feet is featured in a scroll painting by the Court artist Jin Tingbiao, who was active during the Qianlong period, see Chen Yuh-Shiow ed., The Enchanting Splendour of Vases and Planters: A Special Exhibition of Flower Vessels from the Ming and Qing Dynasties, National Palace Museum, Taipei, 2014, cat. no. II-05. Such a jardinière is also featured in another hanging scroll painting by the Court artist, Ding Guanpeng (1736-1795), entitled 'Palace Ladies Chatting', illustrated in the exhibition catalogue The Golden Exile, Pictorial Expressions of the School of Western Missionaries – Artworks of the Qing Dynasty Court, Macao Museum of Art and the Palace Museum, Beijing, Macao, 2002, cat. no. 46.

No other Ru-type jardinière of this exact form appears to be published. Variations on the form are known, although these are extremely rare as well. Compare a jardinière of related size but with different outline and raised on bracket feet, in the Zandelou collection, published in Zandelou Qingdai guanyao danseyou ciqi/Qing Imperial Monochromes. The Zandelou Collection, Shanghai Museum, Beijing Museum and Art Museum, The Chinese University of Hong Kong, 2005, cat. no. 13. Another smaller Yongzheng mark and period clair-de-lune jardinière of similar simple rectangular flared form, but with additional recessed panels on the sides and the seal mark written in a line, was sold at Christie’s New York, 15th September 2011, lot 1575. Another covered with a celadon glaze, from the Wang Xing Lou collection, was included in the exhibitionImperial Perfection. The Palace Porcelain of Three Chinese Emperors, the Minneapolis Institute of Arts, Minneapolis, 2004, cat. no. 67, which notes that these vessels are used in China for penjing (potted landscapes) and were popular in the Qing dynasty for miniature gardens or bonsai trees (p. 182). Compare also a large rectangular jardinière with robin’s egg glaze and Yongzheng mark, exhibited in Chen Yuh-Shiow ed., ibid., cat. no. I-16.