'ZURBARÁN: a new perspective' at the Museo Thyssen-Bornemisza

'ZURBARÁN: a new perspective' at the Museo Thyssen-Bornemisza MADRID - This summer, the Museo Thyssen-Bornemisza is presenting the exhibition Zurbarán: a new perspective, which will offer a fresh assessment of the work of this great master of the Spanish Golden Age from the starting point of the numerous discoveries and studies undertaken over the past few decades, which together have enriched our knowledge of the artist and his oeuvre.

Francisco de Zurbarán and his work have been the subject of numerous exhibitions, from the first one held in Madrid in 1905 to the numerous events that marked the 400th anniversary of his birth in 1998 and which culminated with the major monographic exhibition presented in Seville. Ten years before, in 1988, the large retrospective held at the Museo del Prado offered an updated revision of studies on the painter and his artistic personality but also revealed gaps relating to the studio, to the dating of some works and to some periods of his life. All these aspects are now better known due to research undertaken since then. The fact that more than 25 years that have passed since the exhibition at the Prado provides a good reason to present a new monographic exhibition which focuses on Zurbarán’s artistic personality, life and times and which, rather than aiming to offer an exhaustive reassessment, presents some of the most important new research and discoveries, previously unpublished paintings or ones recently attributed to the artist and others that have been specially restored for this occasion. After being seen in Madrid, where it is supported by Japan Tobacco International, the exhibition will travel to the Museum Kunstpalast in Düsseldorf (Germany) where it will remain on display from 10 October 2015 to 31 January 2016. The selection of works made by the two curators – Odile Delenda, author of the catalogue raisonné of Zurbarán and associate of the Wildenstein Institute in Paris, and Mar Borobia, Head of the Department of Old Master Painting at the Museo Thyssen-Bornemisza – has firstly focused on Zurbarán’s autograph output, including major examples from different periods and from some of the artist’s large-scale cycles painted during the course of his career. Works have been loaned from Spanish, European and American museums and private collections, including works never previously seen in Spain and others that have been added to his oeuvre since 1988. Also presented for the first time is a room on the artist’s studio assistants and another on still lifes, including some of the rare examples by Zurbarán himself and others by his son Juan, a talented collaborator and follower whose magnificent paintings of fruit and flowers have recently been rediscovered and are now highly regarded. Francisco de Zurbarán (Fuente de Cantos, 1598 – Madrid, 1664)
Francisco de Zurbarán was one of the most innovative artists of his time. The appeal of his work extends beyond Spain, making him a key figure among the leading names of European painting. A painter of the specific, the combination of Zurbarán’s geometrical, hard-edged forms, large, plain areas of paint and the silent, solemn universe conveyed in his work allows him to be associated with the aesthetics of some of the 20th-century art movements from Cubism to Metaphysical painting, again revealing the artist’s modernity and ongoing relevance.

Zurbarán is also one of the 17th-century Spanish artists who has best expressed religious sentiment, offering in his works a subtle synthesis between mysticism and realism. He spent most of his life in Seville where he produced devotional paintings, altarpieces and series on monastic subjects for the large number of religious communities in the city at that time, including the Dominicans, Franciscans and Mercedarians. These Orders commissioned pictorial cycles from the artist that mark out the progress of his career and which required workshop participation from an early date. Zurbarán’s original style, which is extremely distinctive and evolved slowly, is defined by a tenebrist approach to light, the use of simple, static compositions and a minutely detailed rendering of the tactile values of the objects depicted. The artist’s sculptural figures, with their monumental, profoundly dignified presence, are solidly constructed in the pictorial space and illuminated by a strong, completely human type of light, thus giving the impression of being transfigured by their faith. An exceptional colourist, Zurbarán’s profound interest in expressing the textures of things means that the textiles and objects of whatever type (flowers, fruit, vessels, etc.,), even those located in secondary positions, become the principal motifs together with the figures’ faces and hands. Some of the finest examples are to be found in the artist’s celebrated series of female saints, whom he depicts in a completely innovative manner: alone, dressed in rich, elaborate clothes and with extremely beautiful faces and expressive gazes. Zurbarán also painted some of the most influential still lifes in Spanish art. Constructed from a few humble objects, these paintings convey to the viewer an entire world of spiritually charged emotions. 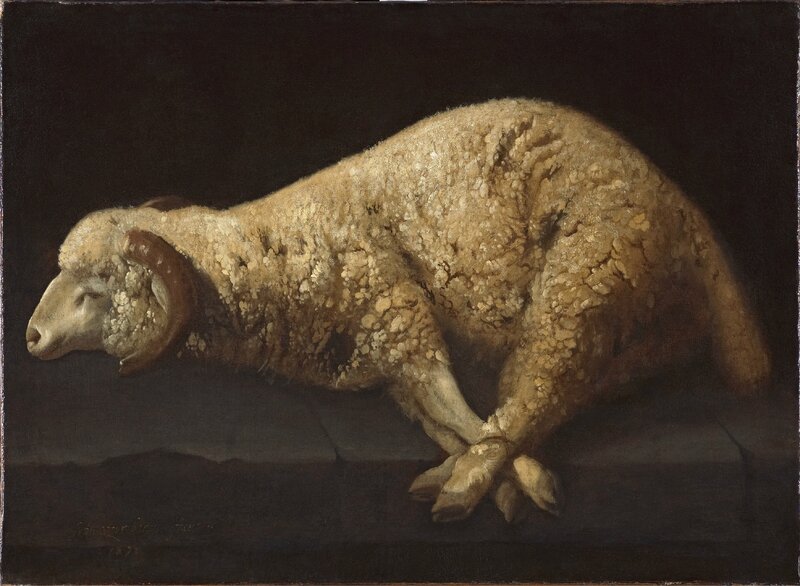 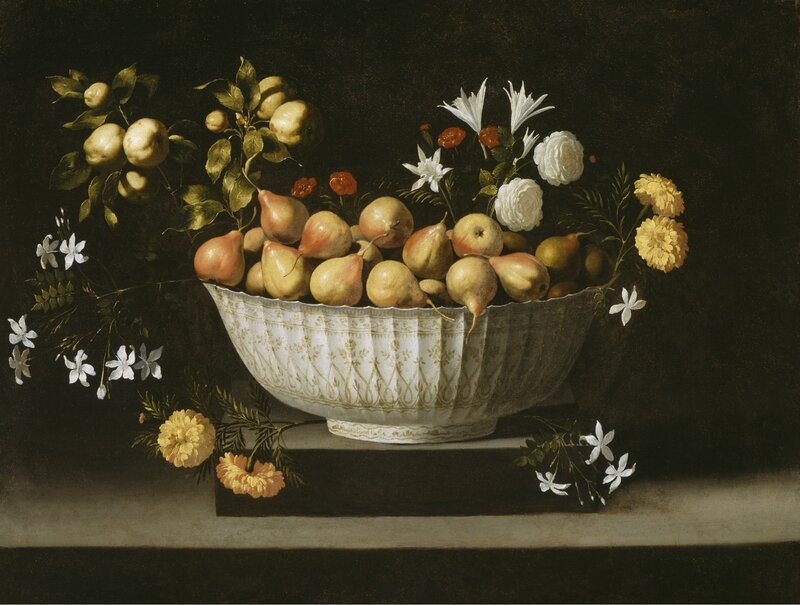 The exhibition will feature a total of 63 works, most of large format, displayed in seven galleries in chronological order but also in relation to the type of commission for which they were painted. Visitors will thus find areas devoted to the major commissions from the religious Orders alongside sections which focus on individual works intended for private devotion. Half-way round the exhibition there are two galleries devoted to still lifes and to the artists working in Zurbarán’s studio.

BEGINNINGS. THE EARLY SERIES 1626-1630
Son of a wealthy merchant, Francisco de Zurbarán was born in Fuente de Cantos (Badajoz) in 1598, the youngest of five brothers. He trained in nearby Seville in the studio of Pedro Díaz de Villanueva where he is documented in 1614. On completing his apprenticeship and at the age of nineteen he married María Páez in Llerena in 1617. They had three children including Juan, a painter who worked with his father. Zurbarán married on two more occasions: to Beatriz de Morales in 1625 and Leonor de Tordera in 1644.

The artist’s first commissions came from his immediate circle until 1627 when he signed a contract to execute 21 paintings for the Dominicans at San Pablo el Real in Seville. This project, for scenes of the Order’s founder to be completed in eight months, opened his way to securing work in Seville. Zurbarán thus received further commissions, such as the series on Saint Peter Nolasco for the monastery of the Merced Calzada. It includes a painting now considered one of the artist’s early masterpieces, Saint Serapion (1628), loaned from the Wadsworth Atheneum in Hartford. One of the highlights of the present exhibition, it has only been exhibited once before in Spain more than fifty years ago. This first section of the exhibition also includes other important, newly attributed works, including The Apparition of the Virgin to Saint Peter Nolasco (ca.1628-1630) from a private collection in Paris, and others never previously exhibited in Spain such as the Standing Saint Francis contemplating a Skull (ca.1633-1635) and Saint Blas (ca.1633-1635) from St. Louis and Bucharest respectively. 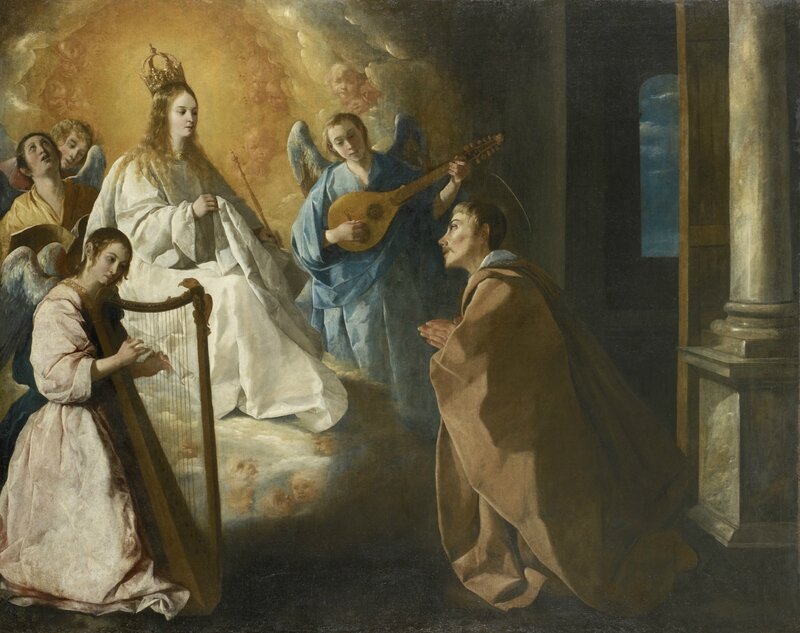 1630-1640. THE SERIES I AND II AND INDIVIDUAL PAINTINGS
In 1629, Zurbarán moved to Seville with his family and assistants. There he continued to work on the large-scale series required by different religious Orders. In 1634 his reputation and his friendship with Velázquez offered him the chance to break away from these monastic clients and to work on the most important artistic project in Madrid at that date: the decoration of the Hall of Realms in the Buen Retiro palace. Zurbarán moved to the capital for a period, painting two large history paintings on the subject of The Relief of Cadiz and a series on the Labours of Hercules, the latter of a modernity that is still surprising today.

On his return to Seville the artist produced two of his most important series: the high altar for the Charterhouse at Jerez (Cadiz), which was broken up in the early 19th century, and the series for the monastery at Guadalupe (Cáceres), the only commission of this type that has remained in situ to the present day. The large monastic cycles of 1638 and 1639 mark the high point of Zurbarán’s career. The Adoration of the Magi (ca.1638-1639) from the Musée de Grenoble and The Martyrdom of Saint James the Apostle from the Museo del Prado are two of the magnificent works to be seen in this section. Both Zurbarán and his workshop produced works for the South American market, particularly Lima and Buenos Aires, sending paintings to churches and monasteries there. From 1640 onwards the workshop focused on the production of important series of standing figures - of the type already seen in the artist’s Apostle Series in Lisbon (1633) - which were often painted for the colonial market. The dead Christ on the Cross from the Museo de Bellas Artes in Asturias (Pedro Masaveu collection), The House at Nazareth from a Madrid private collection, and Saint Francis in Meditation from the National Gallery in London are among the most outstanding works in this section. They are shown alongside other more recently attributed compositions including The Flight into Egypt from the Seattle Art Museum and Saint Anthony of Padua from Etreham (Normandy). 1650-1662. THE MATURE PERIOD. THE ARTIST’S LEGACY
Zurbarán’s style began to evolve around 1650 when his brushstroke became softer, the lighting effects less pronounced, the backgrounds paler and the tonalities of the figures much more luminous. Dating from this period are the paintings for the Charterhouse of Las Cuevas in Seville and a large number of religious scenes painted for private devotional purposes. The beauty of the artist’s late style reveals an evolution towards ever greater levels of sweetness and refinement. Even prior to Murillo, Zurbarán’s work constitutes an extremely natural reflection of the new thinking of the Catholic Reformation. His tender interpretation of childhood is evident in his images of the young Virgin and his extremely youthful Immaculate Virgins, a new cult for which Seville became the principal centre. This final section includes the largest number of works recently added to Zurbarán’s oeuvre, including Saint Francis praying in a Grotto (ca.1650-1655) from the San Diego Museum of Art, The crucified Christ with Saint John, Mary Magdalene and the Virgin (1655), The Infant Virgin sleeping (ca.1655), and the magnificent oil of The Mystic Marriage of Saint Catherine (1660-1662), all from private collections. Commentaires sur 'ZURBARÁN: a new perspective' at the Museo Thyssen-Bornemisza