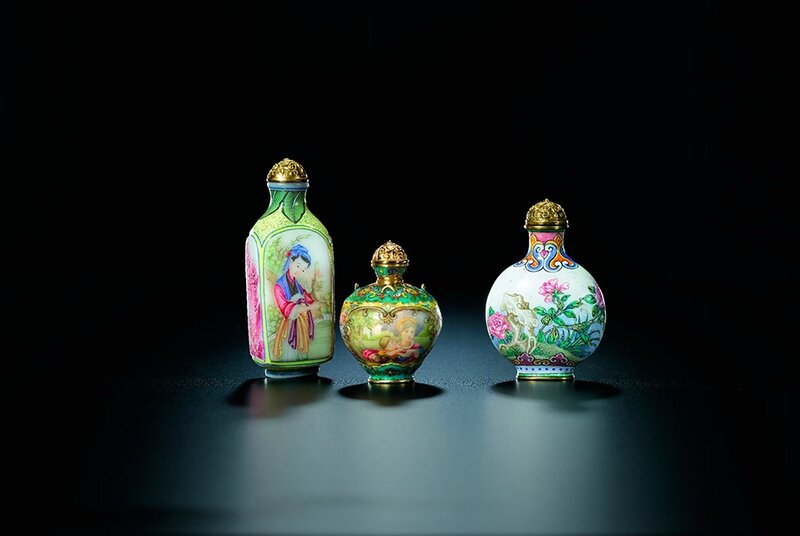 HONG KONG.- Taking place on 1 and 2 June, Sotheby’s Hong Kong Chinese Works of Art June Auction Series will highlight Snuff Bottles from the Mary and George Bloch Collection: Part X, Jades from the Zidongtang Collection as well as Chinese Art. Altogether the three sales will offer 622 lots with a total estimate in excess of HK$57 million / US$7.3 million*.

Christian Bouvet, Director and Head of Mid-Season Sales, Chinese Works of Art Department, says, “Continuing the tradition of offering small private group collections in our mid-season Chinese Works of Art sale series at Sotheby’s Hong Kong gallery, our upcoming auctions will feature the tenth and final sale of the Mary and George Bloch collection of snuff bottles and the sale of the Zidongtang collection, a fine group of Ming and Qing dynasty jades assembled by an Asian collector over 25 years. The main Chinese Art sale will highlight a private European collection of Chinese works of art, formed in Belgium during the last quarter of the 20th century, and the Futian Shanfang collection of early ceramics. Noteworthy also is the sale’s Buddhist section led by a collection of Tibetan thangkas, among them a rare 17th century black painting of Mahakala, and several interesting devotional bronze figures.”

The tenth and final instalment of Snuff Bottles from the Mary and George Bloch Collection consists of 216 lots of snuff bottles in different media, reflecting the rich diversity and artistry of Qing dynasty craftsmanship. The Mary and George Bloch Collection is legendary and counts among the finest Chinese snuff bottles ever made for the Imperial court and scholarly elite. It has been extensively published and exhibited at international institutions including the British Museum and the Hong Kong Museum of Art.

The highlight of the auction is an outstanding glass snuff bottle produced at the Palace Workshops in the Forbidden City. Enamelled on glass with an exquisitely rendered scene of young Chinese ladies in a landscape, it is the counterpart of two surviving examples from the Qing court collection, one in the National Palace Museum, Taipei, the other in the Palace Museum, Beijing. The sides of the bottle are intricately enamelled in ruby-pink with European buildings, the style of painting, perspective and realistic shading all clearly European influenced. 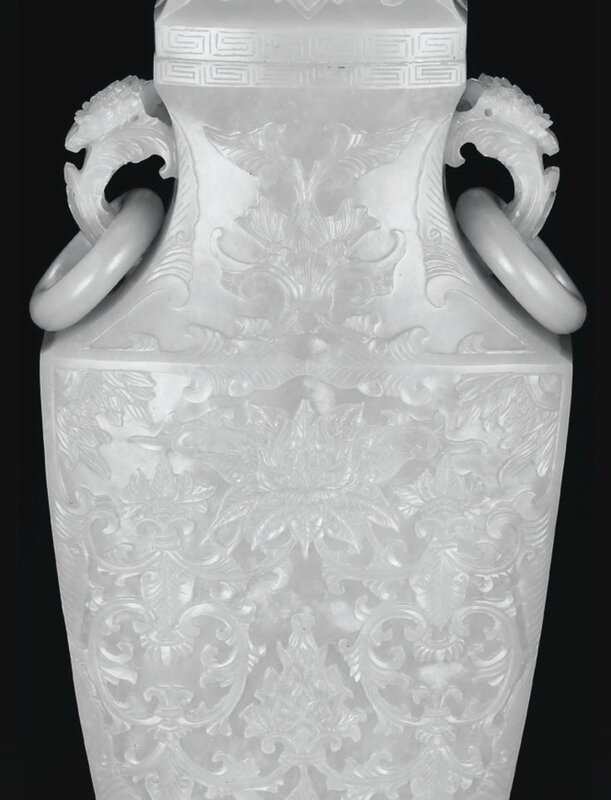 Jades carved in this florid style, which originated in Hindustan in the Mughal period, were first introduced to China around the middle of the Qianlong Emperor’s reign, who quickly grew quite fond of them. The present vase is characteristic of jade wares produced by Chinese craftsmen in imitation of Mughal style carving as seen in the acanthus leave handles deriving from the Mughal tradition, while the addition of loose rings is more characteristically Chinese. Belt hooks carved with this charming motif of three rams are unusual and the present piece is notable for its fine carving. Depictions of three rams symbolise the wish for an auspicious new year. The ram as one of the twelve animals of the Chinese zodiac is the cyclical animal of the current year. This box is notable for its high relief carving of a butterfly hovering over a peony bloom and its expertly finished surface. Boxes carved with this auspicious design that symbolises good fortune, love and joy, were presented as gifts during wedding ceremonies. Beaded rosary bracelets and necklaces were a Qing innovation, which derive from Buddhist rosaries used by monks to keep count of their prayers.

Sessions II│10:30am, 2 June 2015
Sessions III│2pm, 2 June 2015
Offering a total of 370 lots, the Chinese Art sale will highlight a private European collection of Chinese works of art, formed in Belgium during the last quarter of the 20th century, the Futian Shanfang collection of early ceramics assembled by an East Asian couple over the last 20 years, as well as typical second-generation Hong Kong family collections of ceramics and jades. In addition, the Buddhist section includes a comprehensive collection of Tibetan thangkas, among them a rare 17th century Kagyu Naktang of Mahakala, and several interesting devotional bronze figures, including a finely cast 17th / 18th century figure of Chakrasamvara and a rare 15th / 16th century copper and silver-inlaid bronze figure of Milarepa.

Beijing and Canton Enamels from a Private European Collection Lots 668 – 672, Est. range HK$60,000 – 700,000 / US$7,800 – 90,500
The technique of enamelling on metal was introduced by Jesuit missionaries residing in Guangzhou around 1684. By the Qianlong Emperor’s reign, the art of enamelling on metal had reached exceptionally high standards, and this art form continued to receive the Emperor’s foremost interest and patronage.

Early Ceramics from the Futian Shanfang Collection Lots 588 – 602, Est. range HK$50,000 – 2 million / US$6,500 – 259,000
These 15 lots are from the personal collection of a couple, both medical doctors, who were intensely focused on their academic and professional education since they were young, allowing themselves only little time for leisure. They started collecting Chinese art some 20 years ago and have been collecting ever since, primarily in Song ceramics, but also in Buddhist art. The process of collecting opened up a window in their lives and enriched their minds.

Milarepa (ca 1040 – ca 1123) is perceived by Tibetans as the archetypal yogin and is held in the highest esteem for his heroic quest for knowledge. His suffering at the hands of his teacher and his ultimate enlightenment informed the sublime poetry and songs for which Milarepa is famous.

This rare painting depicts Mahakala wearing an enveloping black cloak in the manifestation known as Gonpo Bernagchen, in which he serves as the special protector deity of the Karma Kagyu school of Tibetan Buddhism. Tibetan Nagpa paintings are typically reserved for the ferocious aspects of the Yidam deities, the guardians of the dharma and the mountain spirit deities of pre-Buddhism.