An Imperial blue-glazed ritual altar set for the Temple of Heaven, Qianlong seal marks and of the period

An Imperial blue-glazed ritual altar set for the Temple of Heaven, Qianlong seal marks and of the period 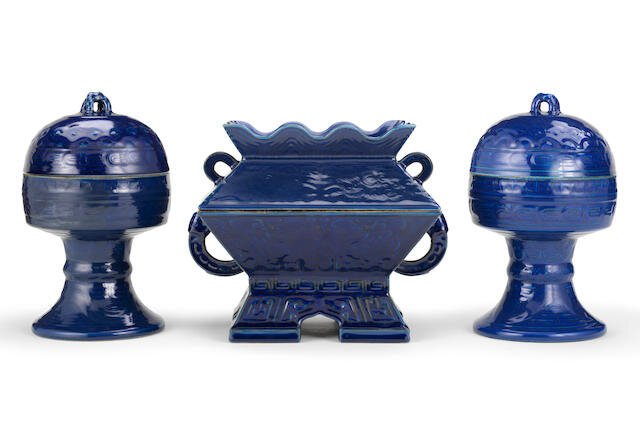 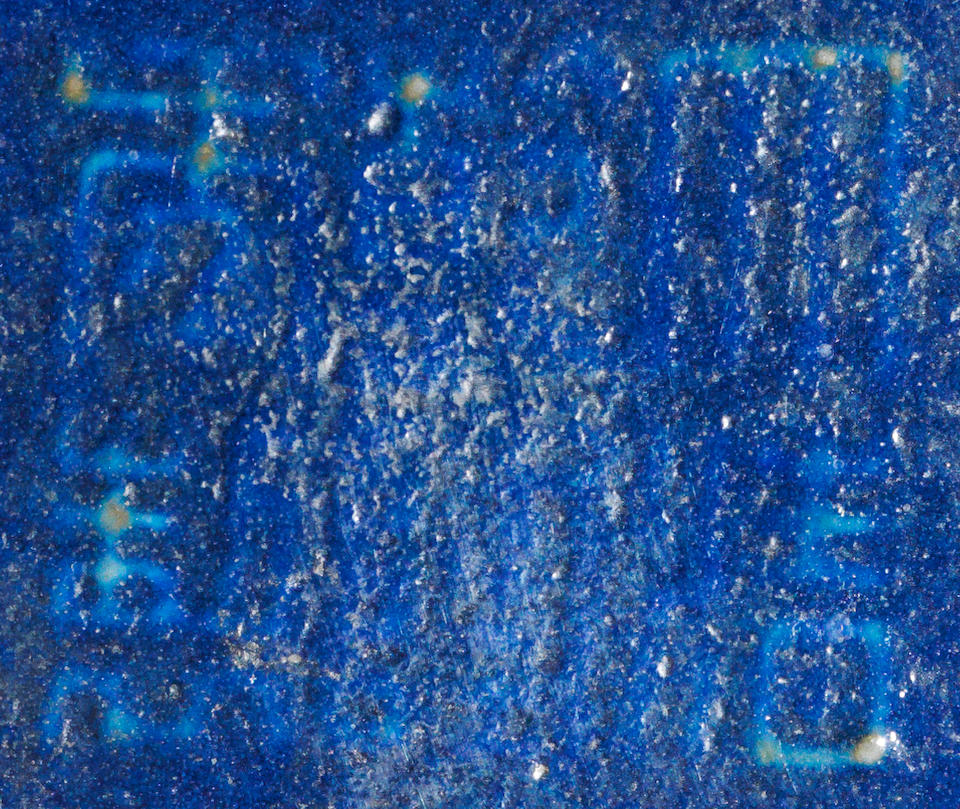 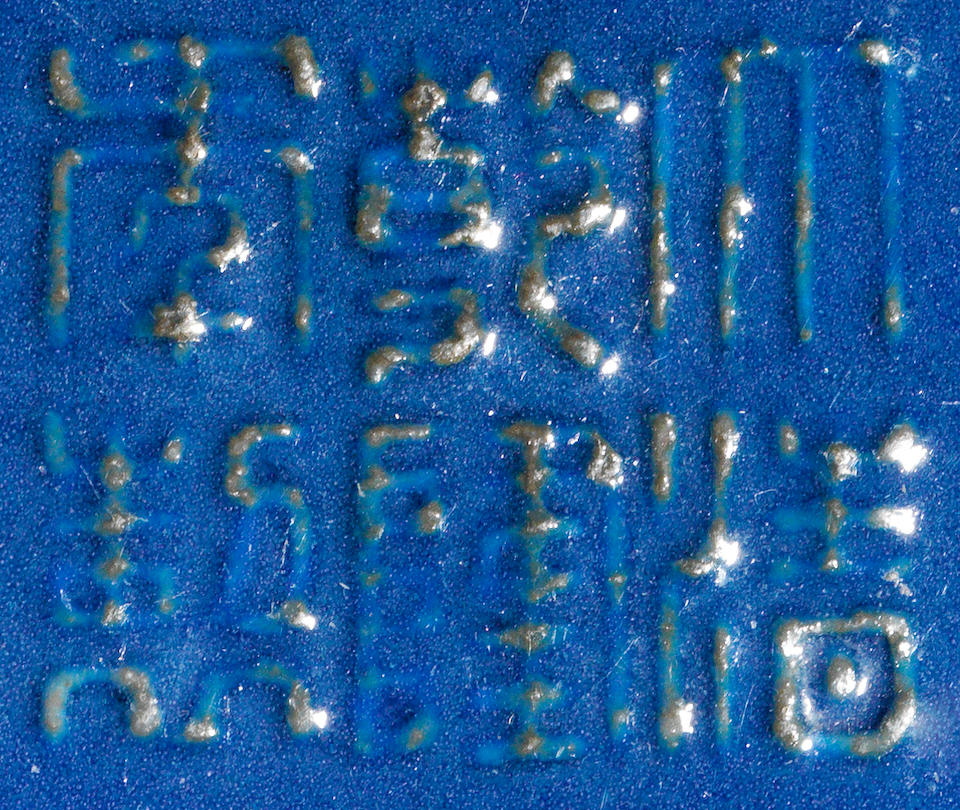 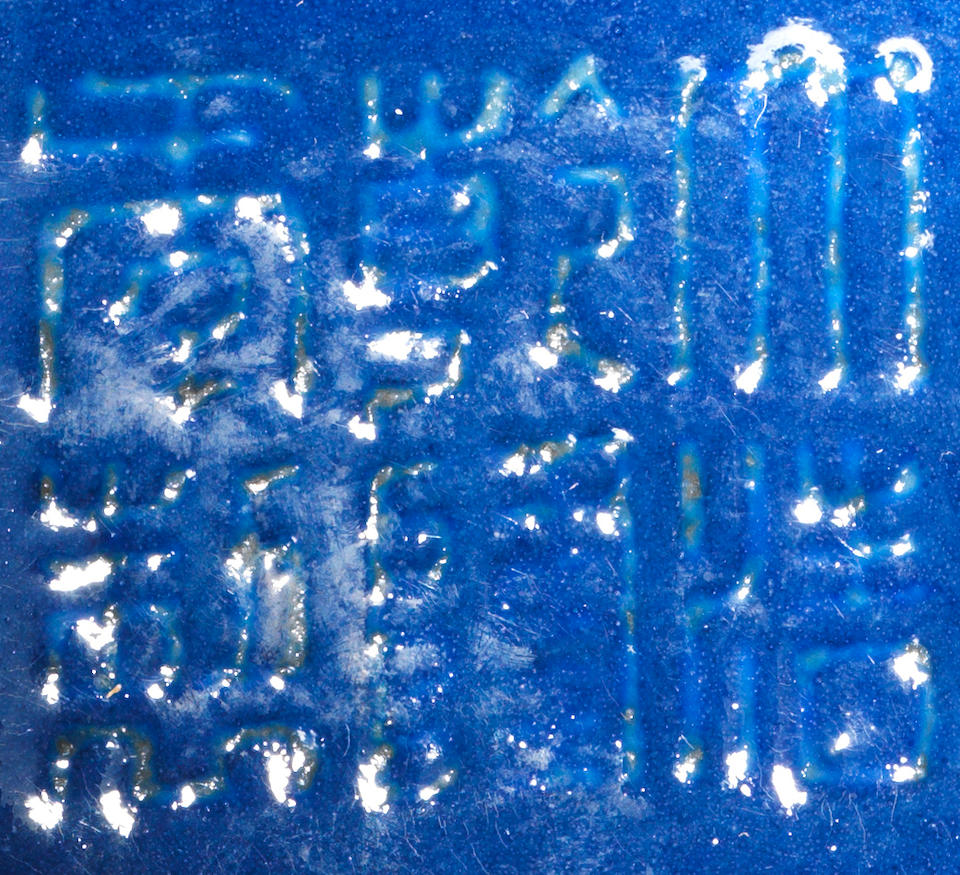 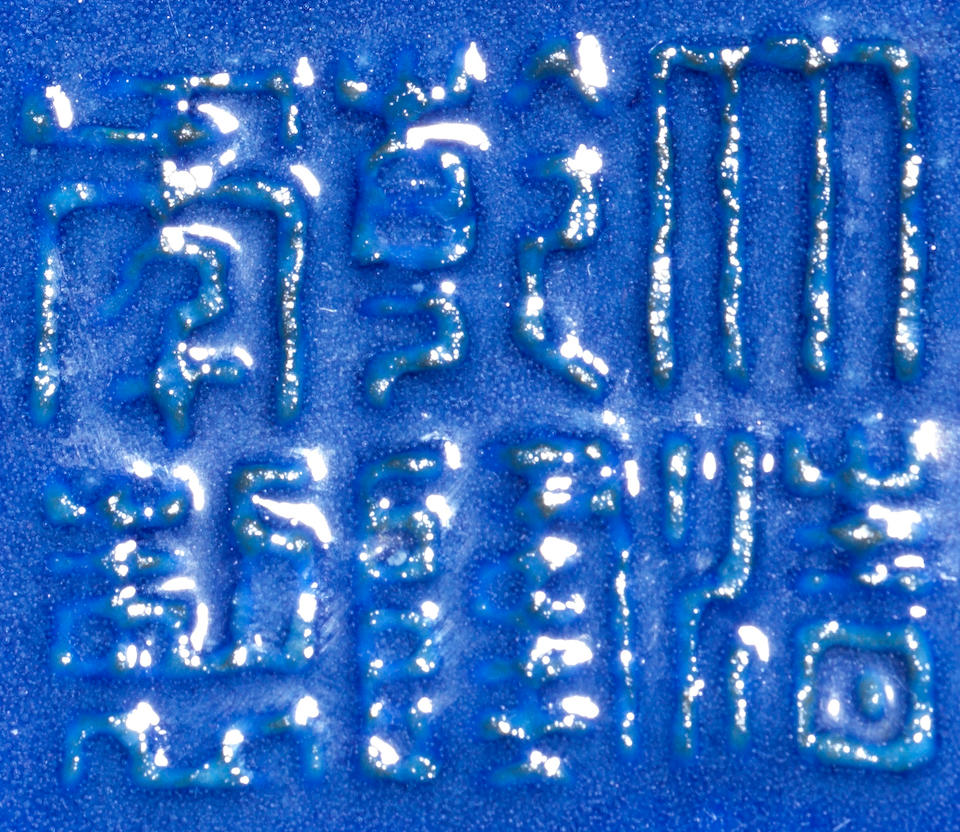 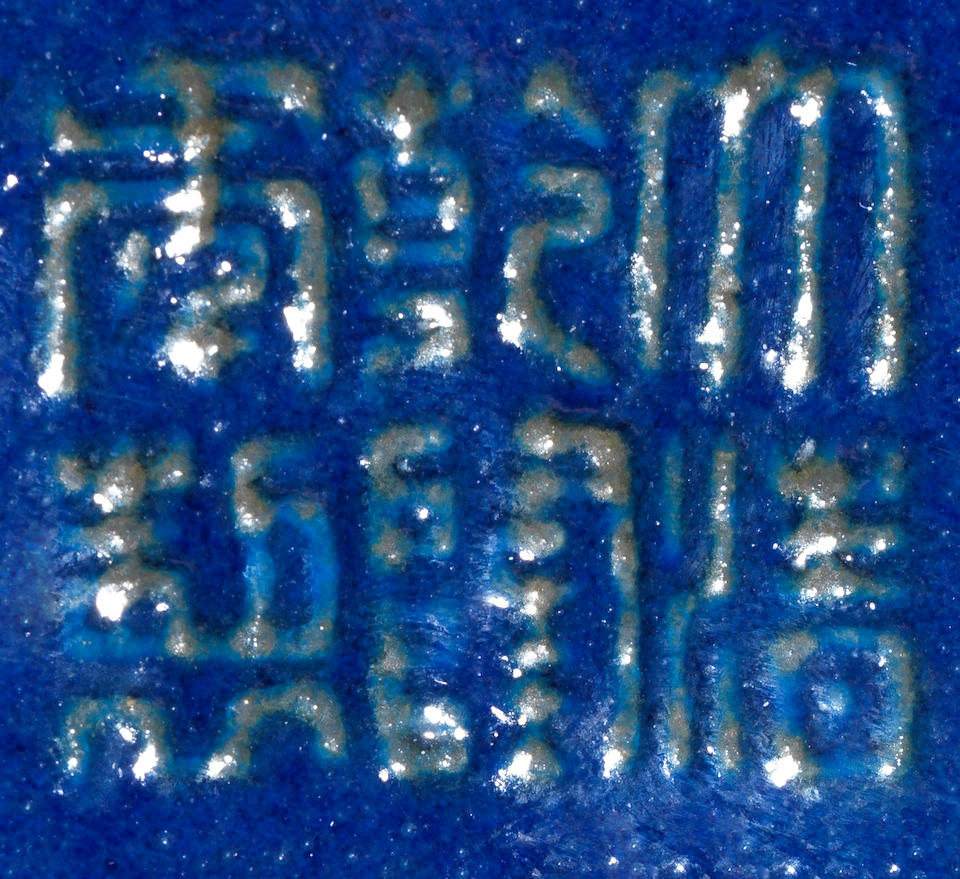 The set modelled in imitation of archaic bronze ritual vessels, the fu of rectangular form with straight sides moulded with confronted mythical beasts angled up from a moulded band of keyfret raised on an angled pierced foot moulded with lappets and impressed with a seal mark on the underside, the loop handle on each of the shorter sides emerging from an animal-head, the cover with a stylised taotie mask design on each side and the shorter sides also each with a simple loop handle, all beneath the raised rim with wave-like edges and impressed mark on the inside, the two stem bowls moulded with decorative bands around the body and high splayed foot and an impressed mark on underside, the domed covers each with moulded bands above the rim, beneath the handle formed as two twists of rope, the inside with an impressed mark, all covered with a deep violet-blue glaze pooling and recessing to highlight the delicate moulded decoration.

Provenance: a distinguished European private collection and thence by descent

Note: The forms for these vessels are based on archaic bronzes buried in Zhou dynasty tombs. See for example, the fu anddou in the Arthur M. Sackler Collection, dated to the Eastern Zhou dynasty and illustrated by J.So, Eastern Zhou Ritual Bronzes from the Arthur M. Sackler Collections, Vol.III, Smithsonian Institute, New York, 1995, nos.23-28. Other examples of dou and fu are illustrated in Zhongguo Qingtongqi Tulu (Xia), Beijing, 2005, pp.295, 299, 301 & 302 for douvessels; and pp.296, 300, & 303 for fu vessels, all dated to the Spring and Autumn Period and classified in the section as 'food vessels'.

The present pieces would have been used in state rituals, for which different colours of vessels were designated for use at different sites by an Imperial decree issued in 1748. Blue vessels were used at the Temple of Heaven, where the emperor made offerings to the Heavens at the Qigutan, or Altar for Bountiful Harvest, during the first lunar month of the year. As the Son of Heaven, the emperor linked Heaven and Earth, and his secluded existence in the Imperial Palaces was punctuated by the performance of solemn ceremonies, for example to mark the agricultural seasons, and thus to preserve order in the universe. Although performed privately, the correct observance of these ceremonies was considered vital to secure peace and prosperity, and avert disaster. The traditional form and highly ritualised use of these vessels reflects the concerns for the long-term stability and continuity of the Chinese empire.

It is very rare to find a complete suite of three ritual vessels preserved together. A single dark-blue glazed dou and cover, dated to the Qianlong period (accession no.25.143.2), is in the Metropolitan Museum of Art, New York, and a guiand cover of related type but oval in form is in the same collection (accession no.21.143.1); a rectangular blue-glazed fuvessel and cover (accession no.FE.23-2004) is in the collection of the Victoria and Albert Museum, London, together with another two dou vessels and covers (accession nos.FE.94&A-1970 & FE.96&A-1970). A single blue-glazed douwith a Qianlong mark is illustrated by Yang Boda, The Tsui Museum of Art: Chinese Ceramics IV: Qing Dynasty, Hong Kong, 1995, no.44.

Commentaires sur An Imperial blue-glazed ritual altar set for the Temple of Heaven, Qianlong seal marks and of the period