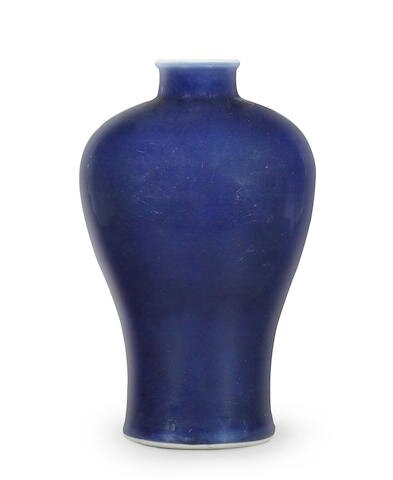 The elegant vase covered on the exterior with a deep blue glaze, stopping neatly at the foot and paling slightly at the mouth, the interior glazed white and the base unglazed, wood stand. 42.5cm high (16 1/2in) (2).

Vases such as the present lot were favoured in both the Ming and Qing dynasties: for a Jiajing period example from the Qing Court Collection, see The Complete Collection of Treasures of the Palace Museum: Monochrome Porcelain, Shanghai, 1999, no.68. Compare also a similar but smaller Yongzheng mark and period meiping vase illustrated inEthereal Elegance: Porcelain Vases of the Imperial Qing, The Huaihaitang Collection, Hong Kong, 2007, pp.108-9, pl.13.