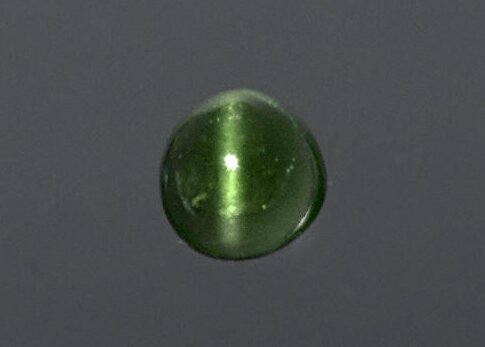 Demantoid garnet is one of the most valuable members of the garnet family--chatoyant demantoids are almost never seen. The few examples which have reached the market originated from the central Ural Mountains in Russia. However in 2001 a new source of demantoid garnet was found in Kerman Province, between the villages of Bagha Borch and Soghan) in the south-east of Iran. Less than 0.1% of the material found there was seen to have any cat's eye effect. The cat's eye effect in Iranian demantoid may apparently be caused by long parallel fibrous inclusions (possibly chrysotile or byssolite). When this material was compared to cat's eye demantoid materials from the Klodovka Mine, in the Ural Mountains in Russia, their crystal forms, color distribution and the types and orientation of inclusions were seen to be different.

The present circular cabochon is distinguished by a vivid green color which is reminiscent of fine demantoid garnets from the Urals. With a high transparency, which at the same time displays a very strong and central cat's eye effect at the apex of its dome. This is a rare collector's gemstone of exceptional quality and of a large size for the species.Weighing approximately 7.04 carats and measuring 10.0 x 6.2 mm