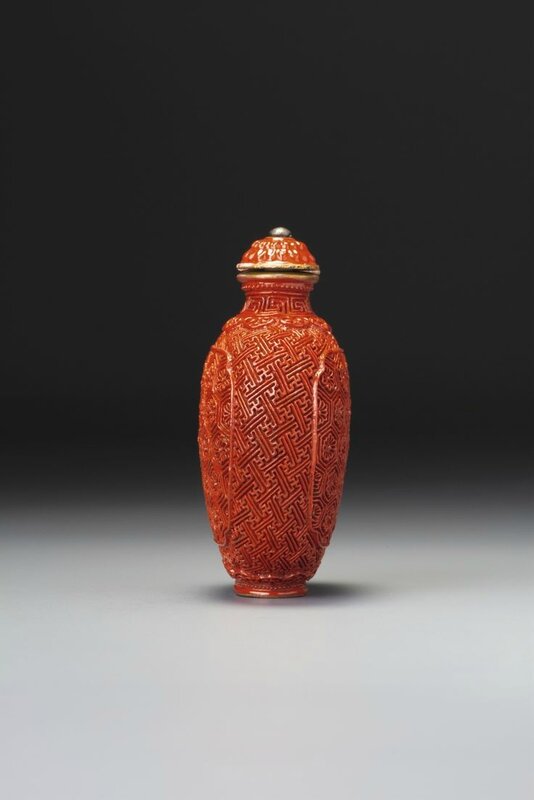 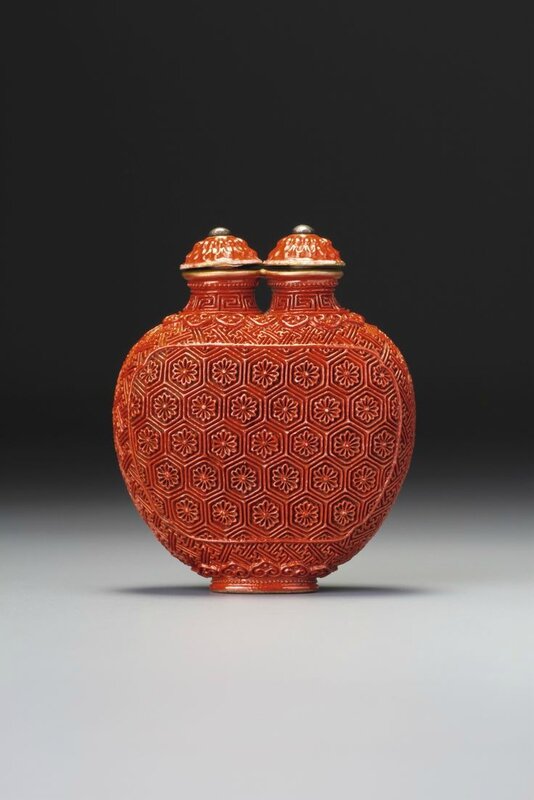 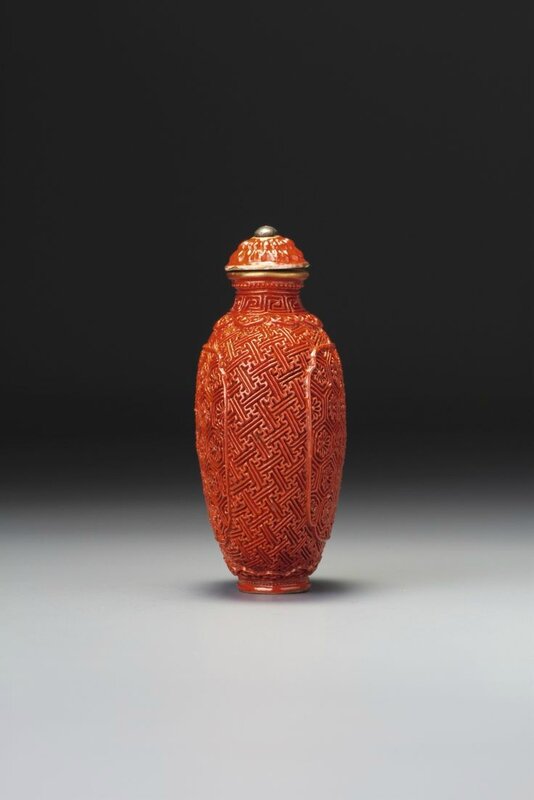 Notes: Double bottles of this type seem to have been a development of the imperial moulded-porcelain fad in the mid-dynasty. The most common example of the type is usually unmarked, painted in famille rose enamels, and decorated with figures in a terraced garden (see, for instance, Hughes 2002, no. 258; Chinese Snuff Bottles 5, p. 52, fig. 20, and Ford 1982, no. 162). This version is much rarer and is clearly marked as from the Jiaqing period. From this bottle alone, it might be possible to conclude that a cinnabar lacquer bottle was the original inspiration. These diaper patterns were commonly used on lacquer wares, but usually only as a ground; it would be an unusual cinnabar lacquer piece that was decorated only with the diaper patterns.

The construction of this bottle is intriguing and may help throw some light on how moulded bottles in general were produced. The interior has the usual vertical mould joints running up the outer walls, but it also has them running up the dividing wall between the two containers, suggesting very strongly that they were moulded as two separate containers and then joined vertically at the centre. Since the design is seamlessly continuous, without a trace of any joints from the outside, it can only mean that a good deal of subsequent hand carving was involved, regardless of how much the mould may have dictated the design.

The complete absence of any difference where the joins must be hidden raises the possibility that it was all carved by hand and that only the basic form was made from two joined moulds, but this hypothesis is undermined by the existence of one other example that appears to be identical and therefore must be from the same mould. It is in the American Museum of Natural History, New York, as part of the Drummond Bequest (formed prior to 1934).

The Drummond bottle is lacking its original stoppers, but the two here, which appear to be original, may support the idea that a larger series of these bottles was produced, which is in any case likely. The stoppers are not made to the same extraordinary standards as the bottle, suggesting they were separately produced in bulk for a series of bottles. Had only these two been produced, they would surely have been finished by the same hands that finished the bottle and would be a closer match. It is possible, of course, they are original stoppers for iron-red moulded porcelain bottles but just not for this one.

The quality and integrity of the design is quite astonishing, with every raised line that forms the various formalized patterns perfectly even in height above the solid ground plane, and equally impressive in the thickness of the raised lines, which seem impossibly even.

A telling feature of the thoughtfulness that preceded this level of quality is the way the orthogonal design of the leiwen has been accommodated to the curving form—no easy task, and achieved here with considerable sensitivity and a minimum of compromise to the parallel lines of the original design.