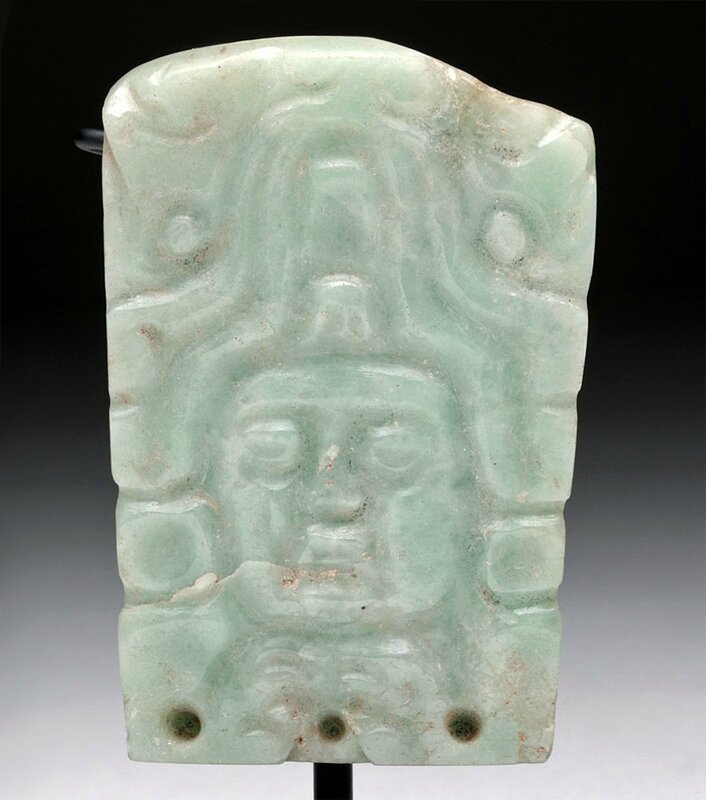 BOULDER, CO.- Attention time travelers and antiquities collectors: No boarding pass is required for Artemis Gallery’s May 21 journey to past civilizations. All that’s required is an Internet connection and you’ll soon be browsing a fascinating auction catalog filled with more than 400 choice Classical, Near Eastern and Far Eastern antiquities; plus Pre-Columbian and ethnographic art.

In addition to bidding online, participants may bid absentee or by phone, always with an absolute assurance that each item is authentic and legal to purchase. In the case of African tribal art, Artemis Gallery also guarantees that the objects were originally used in ceremonies or ritual events, as opposed to being contemporary pieces that were crafted for the tourist trade. A certificate of authenticity ships with each auction purchase.

Precious metals will be presented in a variety of forms, including decorative and monetary. Taking the spotlight in this category is a selection of beautiful Viking jewelry made in northern Europe in the 9th-12th centuries CE.

“Fine jewelry was worn by both men and women as a sign of status within the Viking culture,” note Teresa Dodge, managing director of Artemis Gallery. “Viking craftsmen used high-carat gold and very pure silver that stood the test of time, as you can see from the items in our auction.”

A braided ring composed of two 22K gold wires twisted together, hammered and welded at the terminals exhibits traditional Viking techniques. Weighing 5.2 grams, the ring is estimated at $5,000-$7,000. A pair of high-karat gold hoop earrings adorned with inverted pyramids is similarly estimated at $5,000-$7,000, while an elegant twisted silver bracelet with coiled terminals is expected to make $2,000-$3,000. All three items were discovered in Great Britain and have been held in private collections for decades. 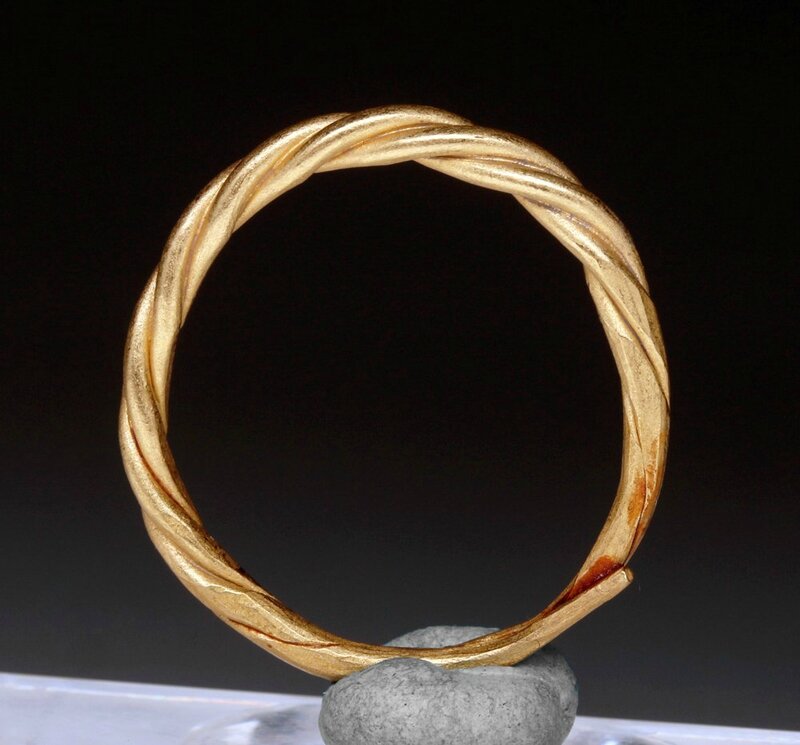 Stunning high karat (more than 22 karat) gold ring comprised of two gold wires twisted together and hammered and welded at the terminals, displaying traditional Viking techniques. May be worn as a ring or suspended as a lovely pendant. Size: 5.2 grams; 1" diameter. Ring size approximately 11-1/4.

Provenance: Ex-private A. Green collection, United Kingdom, acquired prior to 1990. A breathtaking pair of high karat (more than 22 karat) gold hoop earrings adorned with inverted pyramidal terminals which are elaborately dressed in fine and copious granulation. Furthermore, large sections of the hoops are wrapped with gold wiring, making for an elegantly coiled framing of a sinuous or serpentine motif. Size: 8.6 grams for the pair; 1"L (2.54 cm) x 7/8"W (2.22 cm) to 1"W (2.54 cm).

Provenance: Ex-private A. Green collection, United Kingdom, acquired prior to 1990. 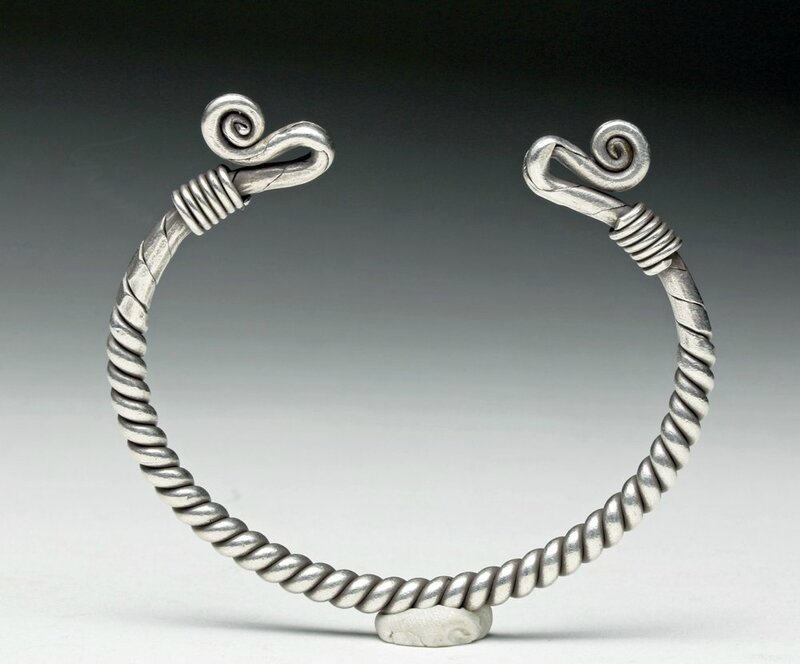 Exhibiting extremely fine artistry and detail work, a circa-19th-century Russian icon depicting Saint Nicholas is stamped “BE” and “84” on its silver oklad (cover). It comes to Artemis Gallery from a Texas private collection and carries a $2,000-$3,000 estimate. Extremely fine and desirable icon depicting Saint Nicholas. Painted on linden wood, with frontal portrait of the Saint, one hand to his chest, the other raised in blessing, two additional figures to each side. Icon covered with silver oklad which has been decorated with detailed floral elements, crosses, textile patterns and radiating halo. Oklad stamped BE and 84. Size: 10-1/4"W x 12-1/8"H.

Provenance: Ex-private Houston, TX collection acquired at auction or local gallery between 1982 and 1994.

A historically important medieval dagger from the Battle of Towton (1461, English Wars of the Roses) is made from iron and bronze with a wood handle, and has retained all of its elements. The formidable 14½-inch-long battle weapon is estimated at $2,000-$3,000.

From an earlier era, a circa 158-150 BCE silver tetradrachm from Macedonia features the head of Artemis on obverse and monograms, a thunderbolt and a club with oak leaves on the reverse. Estimate: $700-$900. 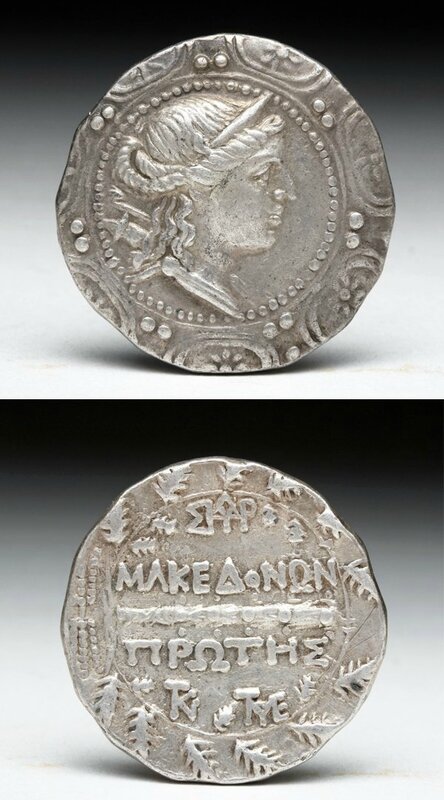 Diademed head of Artemis, right quiver over shoulder in center of Macedonian shield. Reverse shows club with oak leaves, monograms and a thunderbolt. Size: 7/8" in diameter.

A double-handled Corinthian (Greek) circa 6th century BCE pottery kylix is decorated with appealing red-figure images of facing swans on one side and a walking panther on the other. With provenance from an advanced private collection from Ketchum, Idaho, the vessel is entered in the sale with a $3,000-$5,000 estimate. Fabulous pottery kylix decorated in red-figure (misfired and intended to be black-figured), with image of a panther walking right on one side, pair of swans on the other. Size: 6-1/4" handle to handle.

Provenance: Ex-private Ketchum, ID collection acquired at major US or UK auction house or gallery between 1989 and 1999. 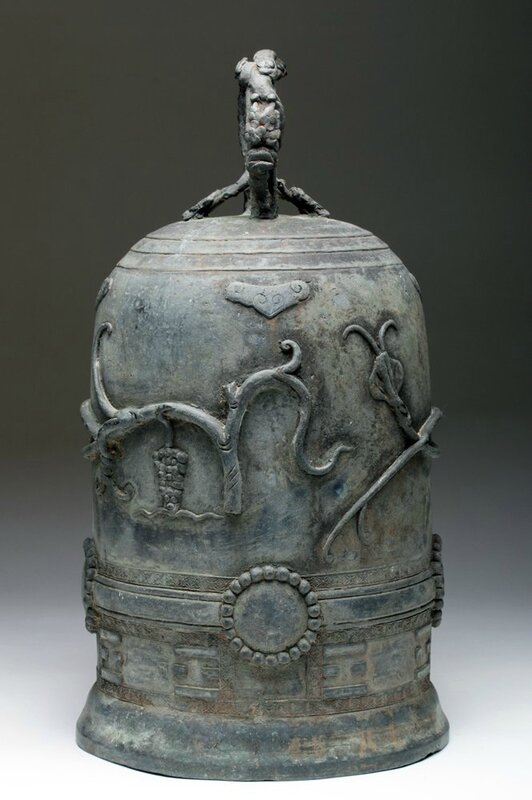 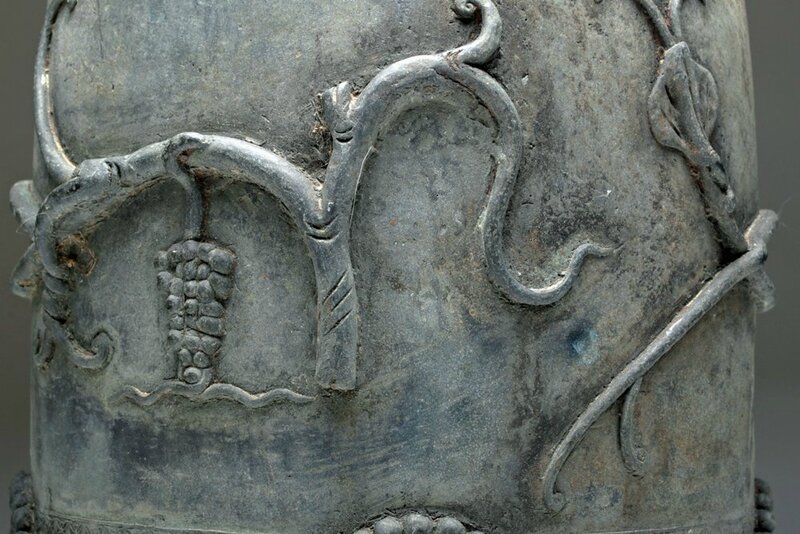 A stunning Tibetan thangka depicting the Lineage Tree of the Gelugpa Sect (Gelugpa Field of Accumulation). Elaborately painted depicting the Tibetan Buddhist monk Tsong Khapa with high peaked cap seated, cradling an alms bowl in his hands, a lotus stem on each side and a smaller Buddhist figure on his chest, the monk surrounded by a halo and positioned at the summit of a tree supporting crowds of further monks, Bodhisattva and other Buddhist figures with further figures floating on clouds, custom framed. For a very similar example, see Bonhams, London, Lot 352, Nov 6, 2014 Sale of Fine Chinese Art, sold for $15,100. Near choice. 22"L X 32-1/2"H, 32.5"L X 37"H with frame.

Provenance: Ex-Sarkisian Gallery acquired from Mr. Burns - a world reknown mountainer who traveled extensively to Tibet in the 1950's and 1960's.

A wonderfully varied selection of Pre-Columbian art is led by a Mayan apple-green jade adornment, circa 6th-9th century CE, with the carved visage of a Mayan ruler or lord wearing an ornamental headdress. Ex-Adeon Gallery, Chicago, the artwork is presented on a custom stand and has a pre-sale estimate of $4,000-$6,000. The Maya had a preference for brilliant apple-green jade, quite different but no less aesthetically exquisite than the blue-green jade of the earlier Olmec peoples. This piece features a carved frontal visage of a Mayan ruler or lord with intricate headdress and finely delineated facial features. Perforations drilled at lower and upper edges for attachment to clothing. 2-1/4" (5.75 cm) H x 1-1/2" (3.75 cm) W x 3/8" (1 cm) D.

A Xochipala (Mexican Central Highlands) terracotta sculpture of a seated baby girl with pierced ears, mouth and eyes measures 7½ inches high by 8½ inches wide. Previously auctioned at Sotheby’s on May 20, 1986, the endearing child figure is entered in Artemis Gallery’s auction with a $4,000-$5,000 estimate. 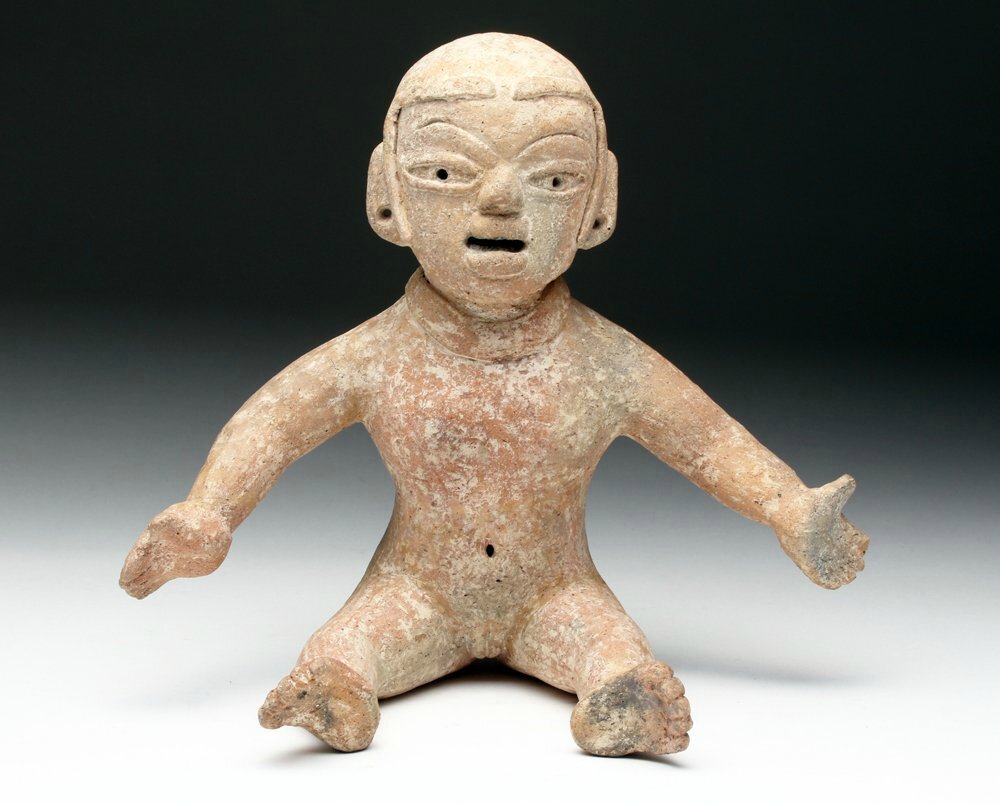 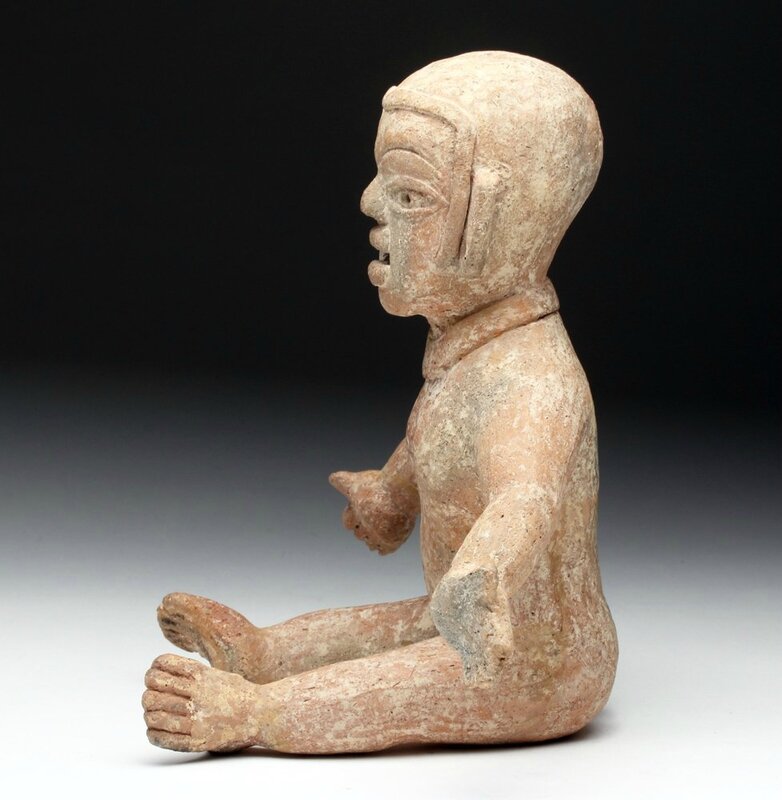 A rare and lovely depiction of a baby girl in terracotta, seated with legs in front, arms wide open and necklace around neck. Curled feet and hands, pierced eyes, ears, and mouth, and round smooth head. Size: 7-1/2"H x 8-1/2"W.

Rare and unusual, two 48-inch-long Oceanic (New Guinea or Molucca Islands) animal-skin scrolls are both pictorial and narrative in nature. Both date to the 17th or 18th century and will be offered as one lot with a $10,000-$15,000 estimate. 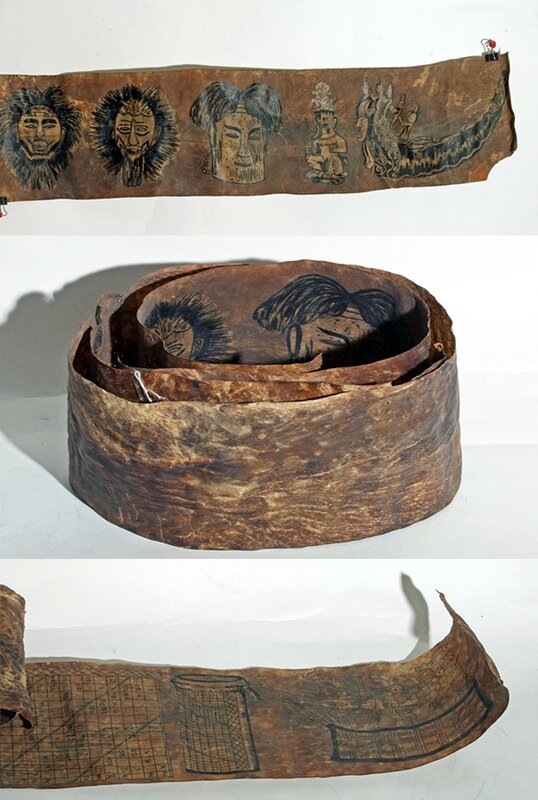 The iconography of the shorter scroll includes three mask-like visages, one image of a seated lord, and a depiction of a canoe decorated with a profile visage at the prow followed by a procession of five figures, the first with hands placed upon the prow head, the others with hands placed upon the shoulders of the preceding figures. The longer scroll includes fascinating ideograms, a totem-pole like image, and a boat with three figures, dressed in ceremonious perhaps war regalia, depicted in composite profile. According to the collector of this piece, who is not only a reputable collector but also an accomplished New York University educated art historian, this is a rare written record from New Guinea or the adjacent Molucca Islands. He writes, "Looking at the details of the canoe prows is indicative of openwork carvings of their war boats precisely pertaining to the Northwestern part of New Guinea." An unusual find, as up to this point, we have not seen written records from the indigenous of this part of the world.

Bidders may participate in Artemis Gallery’s May 21, 2015 auction live online, by phone (please reserve phone line in advance) or by leaving an absentee bid that will be lodged confidentially and competitively on their behalf. The sale will begin at 11 a.m. Eastern Time and will be conducted simultaneously on three bidding platforms: ArtemisGalleryLIVE.com, LiveAuctioneers.com and Invaluable.com. For additional information about any item in the auction, call Teresa Dodge at 720-502-5289 or email teresa@artemisgallery.com.