The stunning diamond rivière necklace features Triple X-cut diamonds that are of the highest cut, polish and symmetry grade. The graduated line of fifty-two round brilliant-cut diamonds weigh over 70 carats that are joined together by a heart-shaped clasp.

A luscious pink diamond and diamond ring is a star lot, which is estimated at $600,000-800,000. The cut-cornered, rectangular-cut fancy intense pink diamond weighing 3.56 carats is set within a pear-shaped diamond surround. It is further enhanced by a pavé-set diamond surround and mounted in 18k white and yellow gold. The color pink is hailed as one of the rarest to be found in diamonds. Most pink diamonds come from one mine in the world: the Argyle diamond mine in the remote north of Western Australia, the world's largest producer of natural colored diamonds.

Remarkably, only 5% of diamonds mined from Argyle are of gem quality, and less than 1% of those are pink. Every one million carats of rough diamonds mined typically yields only one carat of gem-quality pink diamond.

Even more rare are the highly saturated pink diamonds which are graded as 'Intense' or 'Vivid' and those that are over 1ct are truly scarce. Pure pinks are more popular and rare than diamonds that are modified by purple, orange or brown hues.

The Argyle mine is expected to continue producing diamonds until 2020 but, with no other significant pink diamond mines elsewhere in the world, the demand for these alluring pink gemstones far exceeds the supply. Susan Abeles, US head of jewelry at Bonhams, comments on the desirability of colorful jewels, “This sale is packed with beautiful colored stones and important pieces of wearable jewelry that have, time and time again, proven their worth in the saleroom.”

Strong examples of colored gemstones include:

An important 25 carat sapphire and diamond ring (est. $400,000-500,000) by M. Gerard, a famous French jewelry house known for its superior craftsmanship and superb gemstones. The richly colored crystal sapphire’s unusual octagonal cut makes this a very rare find. The sapphire is flanked by triangular-cut diamonds and is mounted in 18k gold. Accompanied by AGL report #CS 67998, dated May 14, 2015, stating the sapphire as: Classic Ceylon (Sri Lanka) origin, no indications of heat or clarity enhancement.

The magnificent sapphire in this ring exhibits a vivid saturation with a perfect balance of light, in a well formed crystal. Such a stone is rare, and was chosen for these ideal and pure attributes by Louis Gérard, previously of Van Cleef & Arpels. Graded as the best and most classic "Royal Blue" color by Gubelin, this stone is the ideal example of the finest quality sapphires from Ceylon; it is unusual for its size, octagonal cut and captivating, rich color.

In 1968, Louis Gerard founded M. Gérard, a French jewelry house which, during the twenty years of business was recognized for its notable creations which were characterized by superb manufacture, minimal use of metal and superior quality specimen gemstones. This ring reflects the sensitivity and superb craftsmanship that exemplifies the few surviving creations from this short lived, but famous jeweler. A brilliant and saturated Imperial topaz and diamond pendant brooch from the belle epoque era brings a bright splash of color to the sale ($6,000-9,000) 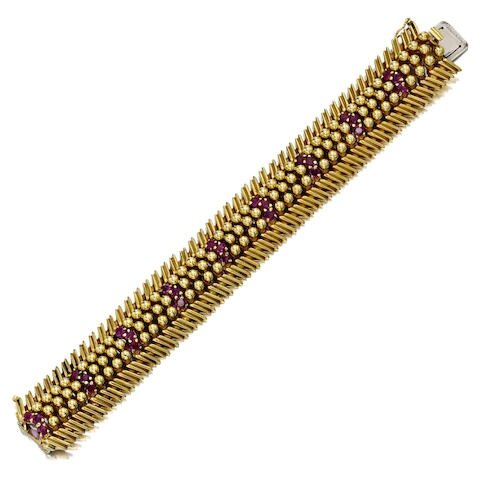 Other highlights include a number of rare and unusual items:

A collection of cufflinks, which include an exceptional pair of yellow gold cufflinks by Cartier, one featuring a tiny watch, and the other a compass is estimated at $10,000-15,000. Also of considerable note is a pair of art deco rock crystal and diamond cufflinks by Cartier (est. $8,000-12,000), each double link designed as a carved rock crystal bombe plaque within a pavé-set diamond surround. one cufflink with a watch, of mechanical movement, the circular dial with Arabic numerals and blued-steel hands, the second with a compass; signed Cartier, Paris, with French assay mark, watch no, 107739, 012270 (indistinct); diameter: 1/2in. 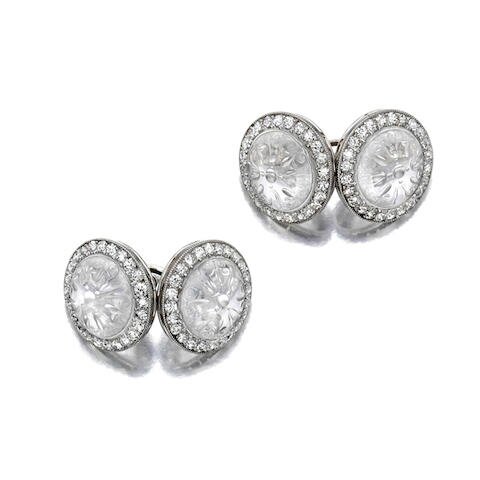 A signed Gianmaria Buccellati choker, which is estimated at $10,000-15,000. The hinged collar is brushed in 18K gold and enhanced by white gold foliate. The auction will be held at 11am.