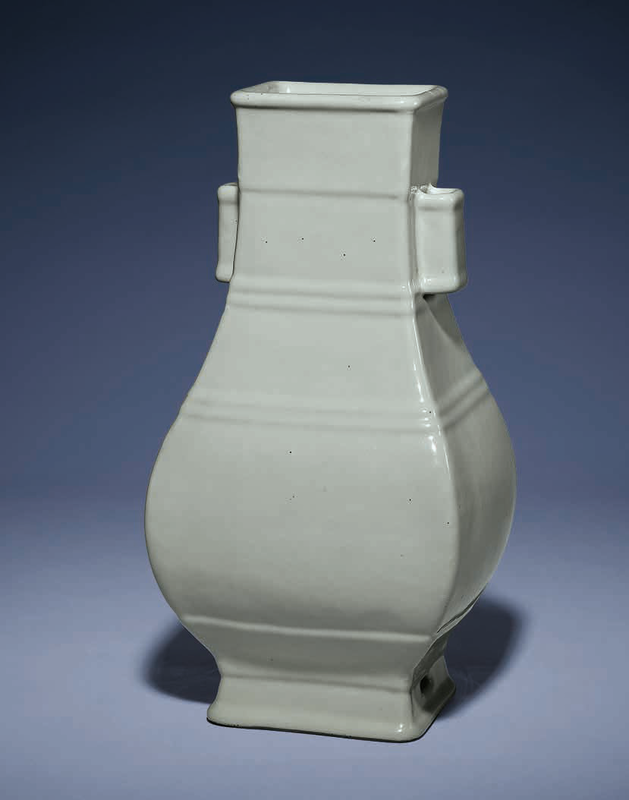 The pear-shaped body is of rectangular section and raised on a pedestal foot pierced with a rectangular aperture on each of the narrow sides, with a double bow-string band encircling the upper body and another below the tubular rectangular handles. The vase is covered overall with an even glaze of widely crackled greyish-blue tone, with the exception of the unglazed foot rim which is covered with a brown dressing. 14 in. (35.5 cm.) high, wood stand, box

Provenance: An English private collection, acquired in Asia in the 1980s

Notes: This very rare vase reflects the Yongzheng Emperor's deep interest in archaism. The crackled celadon glaze is the outcome of the attempt to reproduce the lustrous glaze found on Guan wares made for the Southern Song (AD 1127-1279) court, while its shape is modelled after that of bronze and gilt-bronze vessels of the Zhou (1046V256 BC) and Han (206 BC-AD 220) dynasties.

A larger vase of very similar glaze colour and shape, also bearing a Yongzheng seal mark, is in the National Palace Museum Collection, illustrated in The Enchanting Splendor of Vases and Planters: A Special Exhibition of Flower Vessels from the Ming and Qing Dynasties, Taipei, 2014, pl. II-16 (fig .1).. Another similar Yongzheng-marked guan-type vase, formerly in the collection of Robert Hatfield Ellsworth, was sold at Christie's New York, 17 March 2015, lot 54. Compare also to a Yongzheng-marked Ru-type vase, of similar but more rounded form, sold at Christie's Hong Kong, 26 April 2004, lot 946; and another one sold at Sotheby's Hong Kong, 29 April 1997, lot 577. A related Yongzheng vase of this form but covered in a Ge-type glaze is illustrated in The Special Exhibition of K'ang-hsi, Yung-cheng and Ch'ien-lung Porcelain Ware from the Ch'ing Dynasty in the National Palace Museum, Taipei, 1986, no. 63.