HONG KONG.- Tokyo Chuo Auction Hong Kong’s spring sales, held from 27 to 28 May 2015 at the Four Seasons Hotel Hong Kong, achieved strong results and realized a total of HK$148,580,000 / US$19,048,718. More than 400 lots of fine classical and modern Chinese paintings, Imperial ceramics and works of art and tea wares, including many superb pieces from eminent Japanese collections, were featured in the sales.

Ando Shokei, Founder of Tokyo Chuo Auction, said: “Our two days of sales were well received with enormous interest across the board and many works far surpassing their pre-sale estimates. Collectors responded enthusiastically to Imperial Treasures, our new theme sale devoted entirely to Imperial works of art from the collections of the Ming and Qing courts. We were particularly pleased to see the strong participation of many Hong Kong collectors in the saleroom. The ICHIGO ICHIE - The Art of Tea Ceremony sale continued to appeal to collectors, demonstrating that this is an expanding market in the Asian region. The results confirmed our approach of presenting works of top quality and excellent provenance. Thanks to our strong relationships with Japanese collectors, we look forward to showcasing more treasures from outstanding Japanese collections in our 5th anniversary sale to be held in Tokyo in September this year.”

Imperial Treasures
Taking centre-stage in the special theme sale, Imperial Treasures, was a magnificent famille-rose “hundred deer” vase, Qianlong mark and period (1736-1795) which achieved HK$11,500,000/US$1,474,359 after spirited bidding. The full-bodied vase is masterfully painted in vivid enamels with a herd of deer grazing, running, playing and resting in a verdant landscape, amidst towering pine trees and a meandering river peacefully flowing through rocks and shores. As “hundred deer” and “immense fortune” are homophones in Chinese, the “hundred deer” motif symbolises the coming of wealth and power. Especially fond of “hundred deer” vases, Emperor Qianlong ordered them to be made numerous times, but very few have survived. This rare vase is one of the finest examples of Imperial famille-rose porcelain from the Qianlong era.

Another highlight was a rare blue and white “dragons” vase, Jiaqing mark and period (1796-1820) that realized HK$7,475,000/US$958,333. This vase is exquisitely embellished with designs of five-clawed dragons cavorting amongst billowing clouds and rolling sea waves, which are all placed in a fine composition. Full of motion, the decoration demonstrates the extremely high level of craftsmanship achieved in the Jiaqing era. 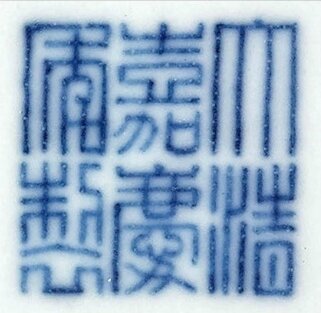 A white jade circular table screen with landscape design from the Qianlong period commanded HK$4,025,000/US$516,026, well above the pre-sale high estimate. Once in the collection of Prince Gong, it is made of a large piece of excellent white jade superbly carved with figures and pavilions amidst hills and valleys in an ingenious composition. There was active bidding for three outstanding scholar’s objects made under the supervision of Tang Ying who was the Superintendent of Imperial Kilns in Jingdezhen, led by a square famille-rose "landscape and calligraphy" brushpot, Qianlong mark and period that sold for HK$1,380,000/US$176,923, nearly doubling the high estimate. 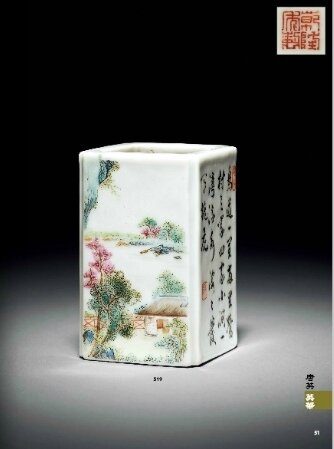 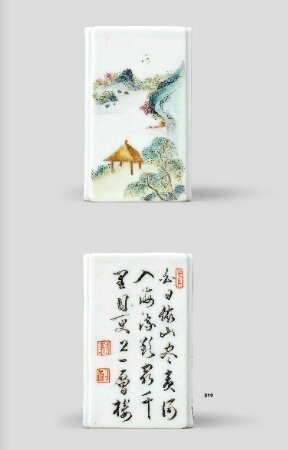 Fine Chinese Classical Paintings and Calligraphy
In the Fine Chinese Classical Paintings and Calligraphy sale, the top lot was an exceptional work, Poems in running script by the Ming master Wen Zhengming (1470-1559), that realized HK$6,670,000/US$855,128. Imitating the running script by Huang Tingjian, Wen inscribed his own poems, Jinshan, Pingshantang and Tianpingshan, in this album with rhythmic, expressive and coherent brushwork, creating strokes full of energy and strength.

A special selection of Taoist and Buddhist paintings and calligraphy sourced from various eminent Japanese collections was highly coveted, including Guanyin, an album of figure paintings and calligraphy created in the Qianlong era which commanded HK$1,150,000/US$147,436, and Embroidery of immortals from the Southern Song Dynasty (1127-1279) which sold for HK$805,000/US$103,205, eight times its high estimate. Of note were Calligraphy in cursive script by Monk Mingben (1263-1323) and Calligraphy in cursive script by Mong Yuejiangjiang (Yuan Dynasty, 1279-1368) which each realized HK$483,000/US$61,923, 16 times their high estimates.

Fine Chinese Modern Paintings
In the Fine Chinese Modern Paintings sale, the top selling lot was Sceneries in Guangdong by Huang Binhong (1865-1955) that fetched HK$5,175,000/ US$663,462. This superb album of ten leaves was formerly in the collection of renowned American collector Robert Hatfield Ellsworth (1929-2014). It captures a typical scene of nature in summer, an elegant and fresh expression of natural beauty in the style of literati painting.

There was enormous interest in a special group of paintings and calligraphy by Wu Changshuo (1844-1927) formerly collected by his descendants, his students, friends’ descendants as well as respected families in Japan’s political world. Many works achieved prices that far exceeded pre-sale expectations, including Peonies which fetched HK$2,185,000/US$280,128 after competitive bidding. Fine Scholar’s Objects
The highlight in the Fine Scholar’s Objects sale was a Tianhuang stone “dragon” seal from the Qing dynasty which realized HK$1,725,000/US$221,154. Its top is exquisitely carved with a dragon cavorting amongst rivers and cliffs, exuding an air of antiquity and solemnity. Another Tianhuang stone seal from the Qing dynasty sold for HK$1,495,000/US$191,667. 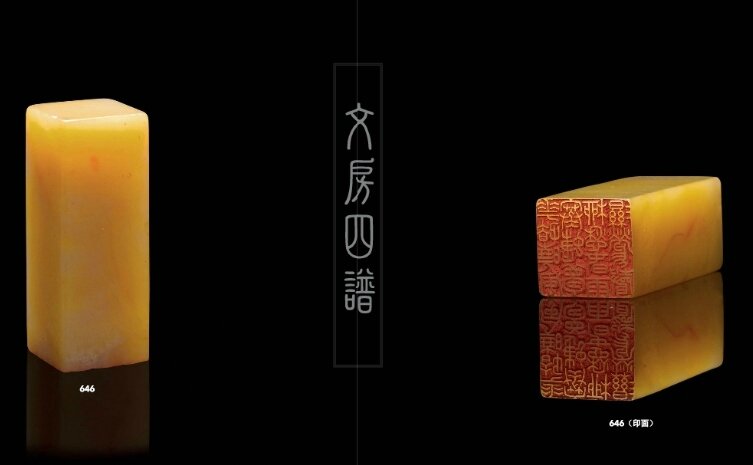 A fine inkstone formerly in the collections Shen Shiyou and Hashimoto Kansetsu fetched HK$1,725,000/ US$221,154 after active bidding. Of great interest was an openwork Duan inkstone from the Ming dynasty which sold for HK$632,500/US$81,090, more than 12 times its pre-sale high estimate.