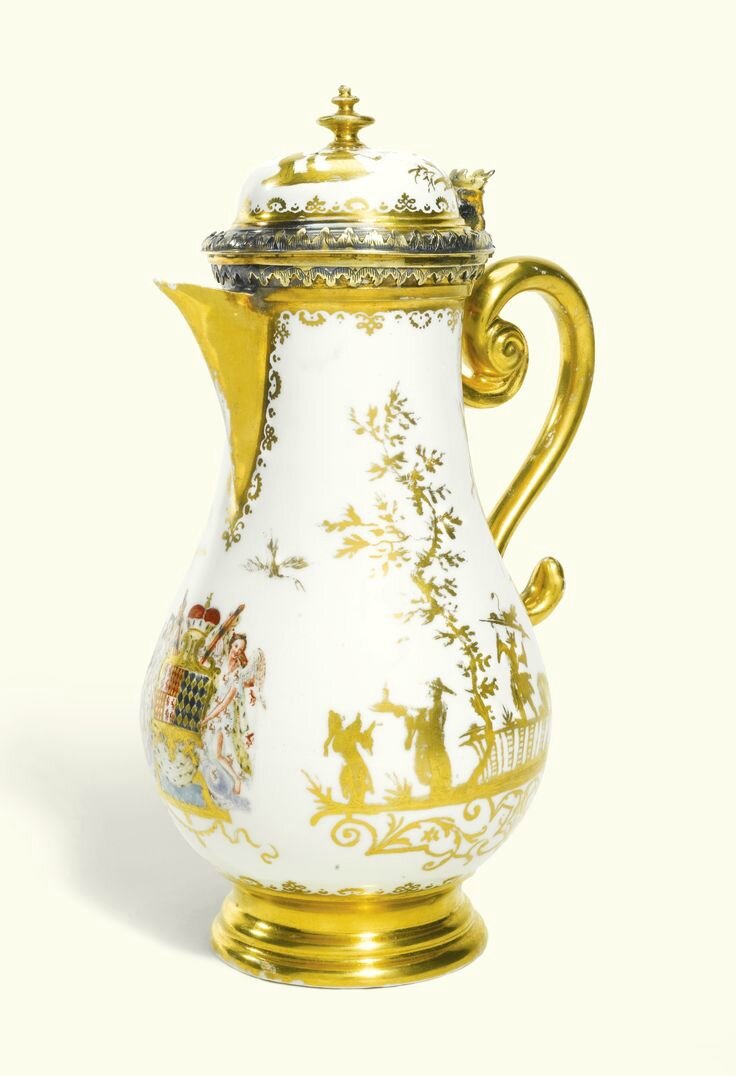 decorated in gilding in the Seuter workshop, Augsburg, with vignettes of chinoiserie figures resting on scrollwork supports with birds in flight above, the front of the coffee pot painted in enamels with the armorial of Prince Marc de Beauvau, Prinz von Craon, the cover with three gilded vignettes of figures, with gilded scroll borders to the rims, 24.8cm., 9 3/4 in. high

Provenance: Sotheby's London, 17th March 1987, lot 298, sold alongside a pair of armorial cups and saucers and an écuelle, cover and a stand from the same service, lots 299 and 300.

The arms belong to Prince Marc de Beauvau-Craon, Grandee of Spain, Knight of the Golden Fleece and Grand Ecuyer of Tuscany (29 April 1679-10 March 1754). Born in Nancy, he was the son of Louis de Beauvau, Marquis of Beauvau and Lord of Craon (1638–1703) and his second wife, Anne de Ligny. On 16th December 1704 he married Anne Marguerite de Lignéville (1686–1772), Countess of the Holy Roman Empire, in Lunéville. They had eight sons and twelve daughters. His wife Anne Marguerite was the mistress of Leopold, Duke of Lorraine.

In 1722 Emperor Charles VI granted him the dignity of Prince of the Holy Roman Empire and Prince of Craon and in 1739 the Knight of the Order of the Golden Fleece. On the 8th May 1727 Philip V of Spain awarded him the title Grandee of Spain. He resided in Florence until he retired in 1749 at the age of 70. He was governor of the regency council of the Grand Duchy of Tuscany for Grand Duke Francesco, later Holy Roman Emperor, who had been declared successor of the last Medici ruler in the Treaty of Vienna. He ruled Tuscany as Viceroy and his descendants ruled, and resided in the Grand Duchy until 1859.