LONDON (AFP).- For centuries, women and sometimes men have squeezed their feet into tiny shoes or balanced on towering heels to feel sexy, empowered and to show their wealth and status.

Now their sacrifice is being celebrated in a new exhibition, 'Shoes: Pleasure and Pain', which opens at the V&A museum in London on Saturday.

From a 2,000-year-old pair of Egyptian gold sandals to child-like Chinese slippers for bound feet, to Christian Louboutin's red-soled stilettoes, the 250 exhibits reveal how fashionable shoes have always been more than footwear. "The exhibition is about the obsession of shoes. It's looking at the power of shoes, how they can tell about status and privilege," curator Helen Persson told AFP.

Luxury shoes have long been the preserve of the rich and idle. Regardless of the cost, high heels, sumptuous fabrics and delicate designs have no place in the field or factory, or indeed in running for a bus.

Where women today have Manolo Blahnik or Jimmy Choo, 19th-century Egyptians had 28.5-centimetre wooden bath clogs and 17th-century Venetian ladies had to balance on their maids to walk in towering "chopine" platforms. Advances in engineering have made many shoes more comfortable but also enabled designers to make them higher and more outlandish, exemplified by Noritaka Tatehana's gravity-defying heel-less shoes.

"Even though they seem so extreme and not wearable, they were designed to be worn," said Persson of the exhibits, which are taken from the V&A's archives as well as loans from other museums and private collectors.

"It's this intriguing thing -- we accept that shoes are pleasure, but also have a bit of pain. And we seem to have accepted that for 2,000 years." No concern for normality
The exhibition starts with the most iconic shoe of all, Cinderella's slipper. Made by Swarovski for the recent Disney movie, it is a testament to the power of footwear to change the wearer's life.

Alongside it is a shoe owned by former England football captain David Beckham, a working-class boy turned global superstar, personalised with the name of his son Brooklyn.

Shoes are also about fantasy. One section of the exhibition is dedicated to their role in seduction, from fluffy, kick-off mules to black leather lace-ups worn during the "porn-chic" trend in London in the 1890s. 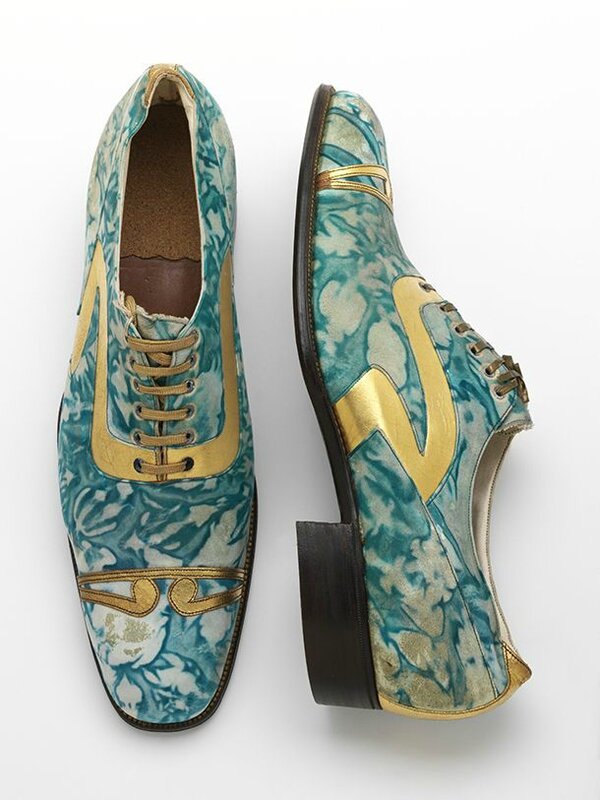 Many of the exhibits were worn by celebrities, from Queen Victoria to Marilyn Monroe, or made by top designers, emphasising the role of shoes as an aspirational item.

There are the golden "Angel wings" by Alexander McQueen worn by Lady Gaga, Vivienne Westwood's blue platforms from which Naomi Campbell toppled onto a Paris catwalk, and a version of the Duchess of Cambridge's nude courts.

"The shoes here are saying, I am important, I belong to the highest societies, I have no concern for the normality of life," Persson said. There are shoes embellished with fur, feathers, gold plate and lavish embroidery, epitomising how footwear is often seen as "jewels for the feet". One 19th-century pair from India have a ruby, diamond, emerald and sapphire trim.

Despite the title, the exhibition does not explore the pain or damage of wearing towering, tight heels -- instead, it offers a sumptuous display of craftmanship and an insight into a passion shared by the curator.

"I do love the way they make me feel," said Persson, wearing a pretty pair of red heels.

"Putting on a pair of high-heeled shoes, I do feel more confident -- my body changes, I do like that. Although I do really like it when I take them off as well."  © 1994-2015 Agence France-Presse