Willem Claesz. Heda, A still life of a roemer, an overturned roemer, a façon-de-venise wineglass, a silver beaker...

Willem Claesz. Heda, A still life of a roemer, an overturned roemer, a façon-de-venise wineglass, a silver beaker... 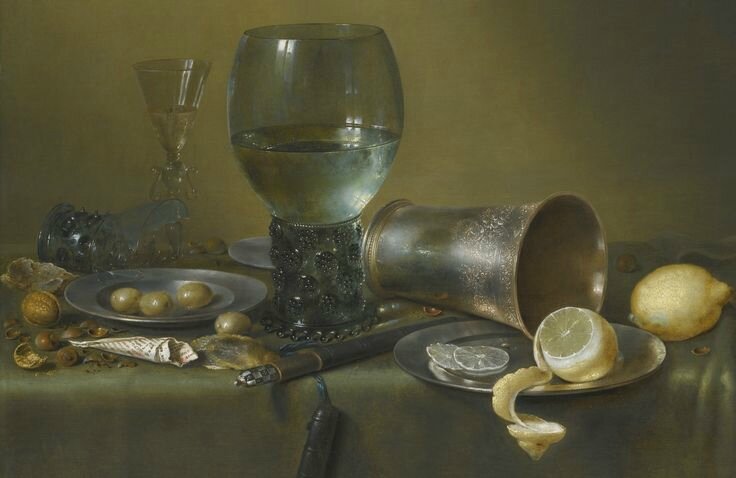 The property of a lady of title.

Note: Around 1630 Willem Claesz. Heda started to paint arrangements of objects on tables laid with a white or green cloth. He restricted himself to remarkably simple groups of objects, typically as here glass and silverware, and lemons, olives  and nuts. They are painted with enormous refinement, but with a deliberately muted palette of greens and yellows, and concentrate on the effects of light passing through or reflected by the objects he chose. They are among the greatest achievements of the Dutch 17th century, and rank with the greatest still-life paintings of any era, before or since. Heda balanced the success of these pictures on the crux of the paradox that his subject matter is very simple and restricted, but the few objects that comprise them, both the expensive – for example the silver beaker here – and the extremely commonplace – for example the hazelnuts – are painted with an enormous richness and complexity. This imbues these compositions with a monumentality that is constructed out of apparent simplicity and spatial harmony. In this picture, one of his finest, he uses an even deep green tone for both the cloth covering the table and the background which are bathed with light from the left. This allows for a tranquil setting devoid of distractions for the main subject of his work, and sets a contemplative mood.

Above all, Heda is interested in the effects of refracted and reflected light. In this picture reflections of a single window to the left and behind the viewer appear twice in the wineglass to the left and three times in both the roemer in the centre the overturned silver beaker, as well as on the rims of the plates and on the olives. In the roemer the window’s reflection is seen firstly on the outside of the green glass bowl, then again on the surface of the wine extending up the inside of the bowl opposite, and finally in the lower part of the bowl where the light has passed through the wine, and taken from it a stronger greenish hue. Further reflections from the window are seen on the points of the prunts on the base of the roemer. On the overturned beaker, the window is seen at the right reflected in the inside rim, on the side of the vessel where the light is dispersed by the engraving on the silver, an optical effect akin to a cataract, and near the base, where the light from the window has passed through the wine glass, and its colour is modified accordingly. Merely to describe one aspect of the lighting within this work is a difficult task, and points to the extreme complexity of construction of what is on the face of it a very pared-down, muted and simple composition. To do so does however cast light on the extraordinary talent of this remarkable and pioneering painter when he was still in his twenties.

Heda’s earliest dated painting is from 1625, and it was not until 1630 that we find dated pictures in any number, so works such as this one are early works, at least in terms of his long career. They are however unquestionably the summit of his achievement. Certain other works painted around 1633 share closely similar characteristics with the present one. The best example is a painting of 1632 in the Wallraf-Richartz-Museum, Cologne, which has most of the same elements, but is even simpler in its composition.1 A roemer (with a different style of prunted stem) also has multiple reflections of a window, as does an identical overturned silver beaker, but in this work from just a year earlier, Heda has not attempted to show the light coloured by the green of the wine and the glass of the roemer on the silver surface of the vessel, which consequently appears slightly flaccid. By 1635, very soon after the present picture, Heda’s compositions start to grow in complexity, and he develops interests in textures of non-reflecting surfaces.2 Later on, his still lifes become much more complex in their composition, and while he remained a painter of great skill into the 1650s, these later works lack the intensity of his prima maniera.

Commentaires sur Willem Claesz. Heda, A still life of a roemer, an overturned roemer, a façon-de-venise wineglass, a silver beaker...