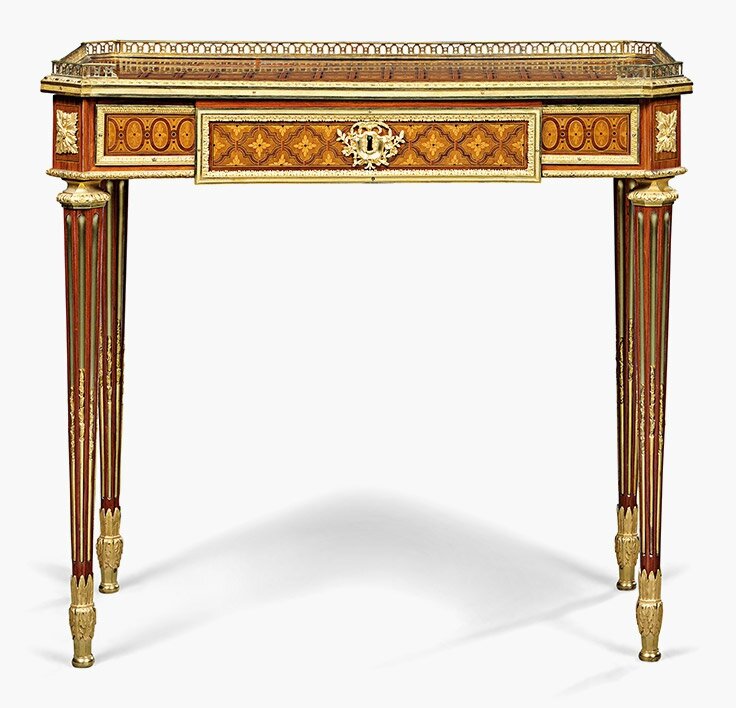 The rectangular sliding top with canted breakfront angles, inlaid overall with square trellis parquetry filled with spiral rosettes within a rosette-filled entrelac border, with a three-quarter gallery, rosette and cabochon moulded edge above a sanded panelled border, above a frieze drawer enclosing a scarlet silk velvet-lined hinged compartment flanked by hinged side compartments inlaid with rosette-filled trellis parquetry, the panelled frieze with stiff-leaf borders and centred by tablets within stiff-leaf and sanded borders, the canted angles applied with rosettes, on brass-fluted octagonal tapering legs filled with chandelles, headed by waisted foliate collars and with conforming stiff-leaf sabots, stamped to the underside M.C..., JME, twice N.P. SEVERIN and five times IF, the escutcheons 18th-century but associated, originally fitted with a mechanical action; 28 1/8 in. (71.5 cm.) high; 30 3/8 in. (77 cm.) wide; 17 ¼ in. (44 cm.) deep

This jewel-like table, retaining almost all of its original highlighted engraving to the marquetry, is a masterpiece by Martin Carlin. It dates from the mid-1770s/early 1780s when Carlin supplied some of his finest work to the greatest collectors of the day, through the marchand-mercier Simon-Philippe Poirier.

MARTIN CARLIN AND NICOLAS-PIERRE SEVERIN
Until offered in the Longleat sale in 2002, only the stamp of the less well-known marchand-ébéniste Nicolas-Pierre Severin had been noted on this table. However, the table is of a form perfected by Carlin and detailed examination in 2002 revealed his elusive stamp. Although Carlin's stamp is not obliterated entirely, it is sufficiently indistinct, suggesting that Severin may have disguised it when retailing the table. After receiving his maîtrise in 1757, Severin became a marchand-ébéniste, not only specialising in the production and restoration of furniture but also serving in the role of dealer and specialising in the resale of furniture. It is known Severin sold Boulle furniture and it is very likely he would have purchased works of other furniture-makers to retail as well, including Carlin.

RELATED TABLES BY CARLIN
With its breakfront treatment of the panelled frieze, octagonal fluted tapering legs with gadrooned capitals, upspringing chandelles above stiff-leaf and acanthus-cup sabots often with castors, this example belongs to an exceptional group of tables. All executed by Carlin, apparently exclusively for the marchands-merciers, particularly Simon-Philippe Poirier (1720-85) and his successor Dominique Daguerre (d. 1796), this group is embellished with either Sèvres porcelain or marquetry.
Of these, the earliest and most expensive example, mounted with Sèvres porcelain plaques, was sold by Poirier to madame du Barry in 1772 for 5,500 livres ; it was later in the collection of Queen Maria-Carolina of Naples, and is now in the Gulbenkian Foundation, Lisbon (P. Coutinho, 18th Century French Furniture, Calouste Gulbenkian Museum, Lisbon, 1999, no. 25, pp. 241-253). A second example, with obliterated stamp and Sèvres porcelain plaques dated 1778, was sold anonymously at Sotheby's, New York, 5 November 1998, lot 462 ($2,972,500). In that Poirier, and after 1777 his successor Daguerre, enjoyed a virtual monopoly over the purchase of porcelain plaques produced at the Sèvres manufactory for furniture, it is fair to assume that this was ordered by Daguerre. A third table of this form, decorated in a marquetry of linked ovals enclosing foliate lozenges and stamped by Carlin, is in the Widener Collection at the National Gallery of Art, Washington (Acc. no. C-278).
Three further tables by Carlin of similar form are known, but with variations in the mounts and surmounted by exceptional specimen marble tops are known. Of these, one decorated with Japanese lacquer was sold from the collection of the late André Meyer, Christie's, New York, 26 October 2001, lot 50 ($1,431,500); another, decorated in Louis XVI 'Boulle' marquetry, was sold from the collection of Francis Guérault, Paris, 31 March 1935, lot 96; and the last, decorated in ebony, was sold from the collection of Jacques Doucet, Galerie Georges Petit, Paris, 7-8 June, 1912, lot 333, and later in the collection of Jean Rossignol, sold Artcurial, Paris, 13 December 2005, lot 132, (€3,100,959).

LONGLEAT
Longleat, Wiltshire has been the seat of the Thynne family since 1541. It is widely considered to be one of the greatest achievements in Elizabethan architecture in England and the first stately home to reveal its full magnificence to the general public, when it opened in 1947. After the original priory was destroyed by a fire in 1567, Sir John Thynne (1515-1580) is thought to have employed the architect Robert Smythson to design the building we recognise today, which took twelve years to complete. Alterations were carried out in 1707 by Christopher Wren under the instruction of 1st Viscount of Weymouth, who added the Best Gallery, Long Gallery, Old Library and Chapel. Sir Jeffry Wyatville, noted for his work on Chatsworth House and Windsor Castle, carried out further modernisations by completing the north façade, constructing a new stable block and remodelling the interior of the house under the direction of Thomas Thynne, the 2nd Marquess of Bath (1765-1837).
As a result of these various stages of internal alterations, little in the collection remains from the 16th Century, with the exception of several important pictures and around fifty books and manuscripts. Much of the current collection was acquire by the 2nd Viscount Weymouth, the 2nd Marquess of Bath and by his grandson the 4th Marquess of Bath. Although the 2nd Marquess was full of antiquarian enthusiasm for oak and old 'buhl' he did not neglect the contemporary, and following the Peace of Amiens in 1802-1803, he followed the flock of fellow British collectors to Paris to acquire previously unobtainable objects whilst there was a brief respite in hostilities. It certainly appears that in the 1820s Lord Bath had an agent operating on his behalf in Paris, acquiring furniture and objects of the ancien régime. This is almost certainly the route by which he acquired this beautiful mosaic parquetry table à écrire by Martin Carlin.
It remained at Longleat until Christie’s were entrusted to offer a superb group of paintings, furniture, books and manuscripts, silver and porcelain for sale in order to provide a maintenance fund to secure the fabric of the house, gardens and estate as well as the integrity of the major part of the collections in perpetuity.