The Siberian Mouse. A pearl, gold and enamel automaton mouse, attributed to Henri Maillardet, circa 1805

The Siberian Mouse. A pearl, gold and enamel automaton mouse, attributed to Henri Maillardet, circa 1805 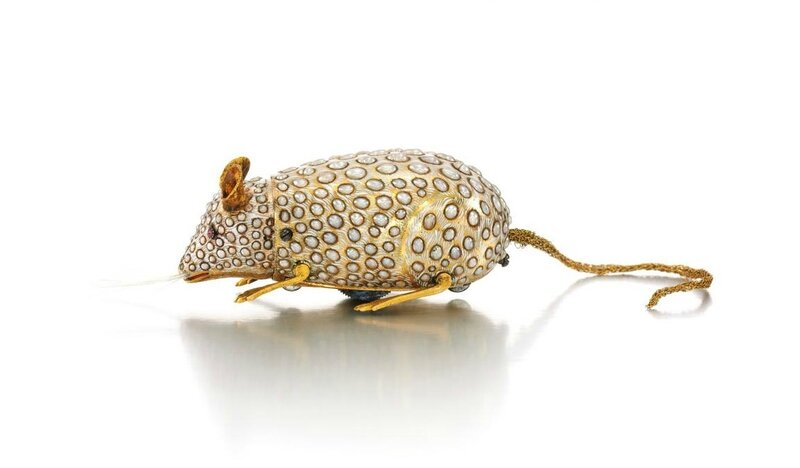 modelled as a lifesize white mouse with enamelled fur set with irregularly-shaped baroque pearls, chased gold ears and paws, round ruby cabochon eyes, the underside chased with diapered texturing, when a button below the perky mesh tail is pressed the mouse skitters, twirls and pauses to sniff the air and nibble in a most realistic manner, unmarked, one ear and bristle whiskers replaced, with later key. Quantité: 2 - mouse 5.5 cm., 2 1/8 in. long, with tail 12.5 cm., 5 in. long

Provenance: Family collection, believed to have been acquired in the late 19th or early 20th Century;
the Property of a Lady of Title

Note: The ‘Siberian Mouse’ is perhaps the most active and realistic in action of the small animal automata exhibited by Henri Maillardet in England and Ireland in the early 19th century. Of life size, this mouse darts forward, twirls nervously fearing a concealed cat, then scampers in a different direction before, reassured, it pauses to nibble at an invisible morsel and sets off once again. There is no doubt that the creator had plenty of experience in watching live mice. An example offered on the second day’s sale of Thomas Weeks’s Mechanical Museum in Tichborne Street, London, on 15 July 1834, following the death of its nonagenarian proprietor, was rather more succinctly described as: ‘An animated mouse, executed of gold and Oriental pearls, which runs about the table and feeds itself’. At that date it was considered an old-fashioned object and was purchased by Garrards for 24 guineas, which is roughly equivalent to half the current low estimate.

Only eight or nine automaton mice are known to have survived and are now or were formerly owned by a number of important collections including the Bowes Museum, Co. Durham, the Sandoz collection, now at Le Locle, Sir David Salomons collection, Jerusalem, and the Patek Philippe Museum, Geneva. The current example which is known to have been in the hands of the present owner’s family for the last two generations at least, is not previously documented. All are set with graduated pearls but are enamelled in a variety of colours including pale blue, dark blue and dark grey. The present mouse with its white enamelled fur is a true Siberian mouse, whose grey fur was believed to turn white in winter to make it invisible in the snow.  Its actions appear nearer to Maillardet’s original mouse than the Sandoz mouse, for example, or that fomerly in the Ikle collection described by Chapuis, which only travel in one direction before stopping, sitting up and nodding their heads.  When Maillardet and his partner Philipstal exhibited their automata in London in 1811, a note on the handbill explained that the mouse ‘will surprise the visitor by its natural cleverness and its ability to run and turn in all directions like a live animal’ just like the present mouse.

Although Henri Maillardet and his showman partners exhibited the small animals, and members of his family also exhibited similar automata throughout Europe in the first part of the 19th century, it is still not certain who exactly was responsible for their inception and construction.  Henry Maillardet is a well-known but rather misty figure in the world of automata in comparison with his more famous associates: James Cox, Pierre and Henri-Louis Jaquet-Droz and Jean-Frédéric Leschot. One cannot be sure whether he was more of a middleman, salesman and showman, or an inventor/creator of automats in his own right. Certainly, like the others and often through circumstances outside their control, his career teetered precariously between success and more frequent financial difficulty. Born at Meyriez in Switzerland, in 1745, Henri and his two brothers are said to have been trained in the Jaquet-Droz workshops before establishing themselves as clockmakers in the village of Fontaines.  Henry and Jean-David are recorded in 1769 as pendulistes under Huguenin working for Frederick the Great in Berlin. By 1783 Henri had arrived in London where a contract witnessed by James Cox was signed between Henry-Louis Jaquet-Droz and Henry Maillardet on 10 May 1783 establishing a London branch of the Jaquet-Droz business, called Jaquet-Droz & Leschot. Maillardet, then a bachelor, was employed to run the firm's London business and workshop in Bartlett's Buildings. The tools belonged to the two partners equally, Maillardet was to receive a salary of £27 annually and the same sum for each of the workmen or apprentices that he needed to feed and house. On the strength of this, Henry married Louise Mourer of Lausanne; their daughter, Louisa Henrietta, was christened at St Andrew, Holborn on 20 March 1785 and their son, Edward Frederick, on 21 August 1786. Success was short-lived as the firm was in trouble by the late 80s and in liquidation in both London and Geneva after Pierre Jaquet-Droz's death in 1790 and that of his son Henri-Louis in 1791. Despite the originality and craftsmanship of the clocks, watches and small automata created by the firm, they had invested too heavily in the China trade on their own account and in partnership with various London merchants and Cox & Beale of Canton.

The years between 1791 and 1798 were spent by Leschot in Geneva and Maillardet in London, attempting unsuccessfully to recreate the earlier successes of Jaquet-Droz and Leschot. By 1798, Henri Maillardet seems to have changed direction and set himself up as a showman. He took over the former premises of Cox's Museum, the Great Promenade Rooms in Spring Gardens (Proprietor: Mr Wigley, 'Inventor and Manufacturer of Elastic Spring Bands'). Here, gradually acquiring new attractions, he showed his 'Wonderful Automatons ... consisting of the Mechanical Musical Lady; the entertaining Fortune-Teller; the pleasing Tumbler; and the wonderful Writing Boy, with the beautiful Singing Bird in a Gold Snuff-box. Also a Siberian mouse etc., etc.' Sadly, although apparently retaining a financial interest in the collection of automata for many years as it was taken on tour round Britain by various successors, Maillardet fell on hard times and died in penury in Belgium between 1827 and 1830.

It is still disputed as to whether both the large and small automatons were the work of Maillardet himself, the Maillardet family or supplied to Maillardet by an unknown maker. Certainly from their style the smaller pieces appear to have had at least their beautifully-enamelled and bejewelled gold exteriors created in Geneva but whether the movements were invented and made by Maillardet as was traditionally believed, remains an open question.