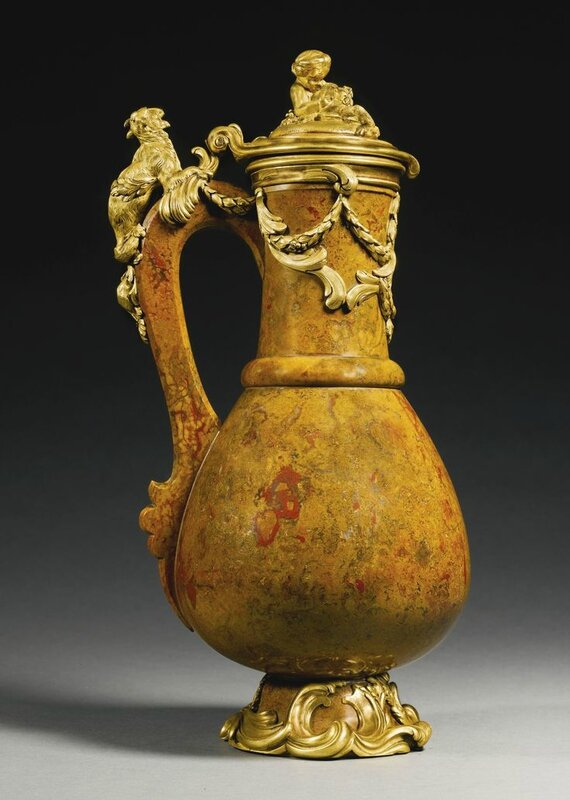 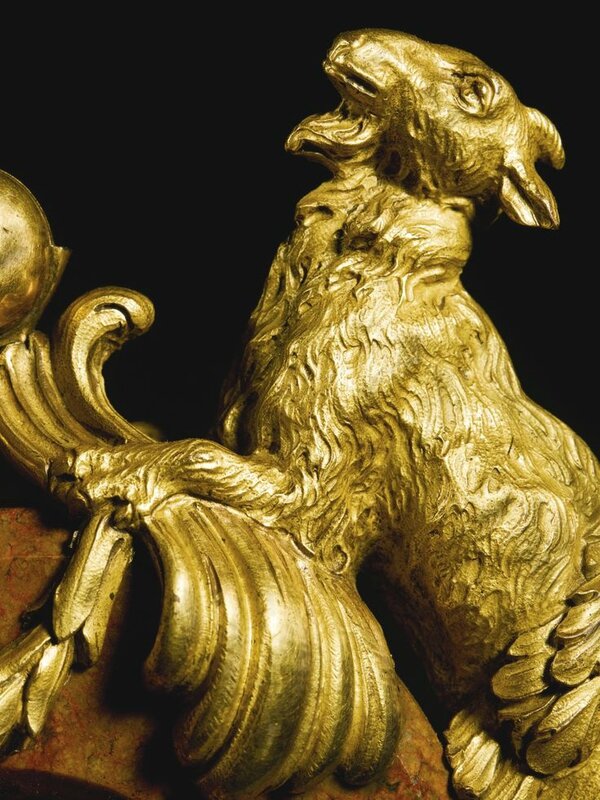 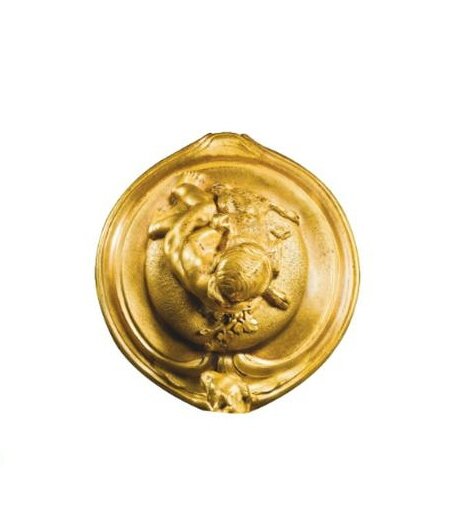 the pear-shaped body with gilt-bronze hinged lid with putto feeding a lamb, with a pawed and serpentine bodied goat over the handle from which wreaths of garlands join those hanging from the neck of the ewer, on a c-scroll mounted base

Note: This fascinating ewer is a rare example of a mounted objet after drawings by the celebrated rococo painter and designer François Boucher (1703-1770), who left an important corpus of work for the decorative arts. In addition to his achievements for the Gobelins and Beauvais textile manufactures and the Vincennes and Sèvres porcelain factories, Boucher, a prolific draughtsman, produced a number of designs for vases and mounts, some of which were published in his Livre de Vases of about 1734-38. Published by Gabriel Huquier, it comprised twelve plates, eight engraved by Huquier whilst the remaining four were by A. Bouchet from Lyon (active c.1730-1740). Although he most likely saw and drew antique vases during his stay in Italy in 1728-1731, these plates reveal an idiosyncratic rocaille interpretation of antique motifs.

Plate 12 of this Livre is directly related to the present ewer (fig.1) and the last one of the folio. Instead of presenting an individual vase as in the previous pages, it presents separately the design for the mounts and the unmounted ewer, revealing a clear concern about documenting the process of mounting the object and therefore demonstrating the importance of the ewer itself. Alice Poirer, who studied Boucher drawings for vases, mentions that this plate “is completely different and may have been drawn at a different date but included to round out the series”, noting nonetheless that all extant copies of the Livre des Vases do include this plate. The bacchic thematic mounts, in the genre pittoresque, of the present lot are a slight variation of the print's design. Not only does the print not show the neck swags and garlands but also the lid lacks the wavier lines published and the putto is holding a small lamb. Interestingly, the conforming elements appear in reverse on the print which indicates that the maker of this precious objet was probably looking at a preparatory drawing of this same engraving.  It was common for Boucher to do a number of drawings on the same object he was designing, and one can only presume that one or more lost drawings existed, serving as models for the mounts on this ewer.

The current work must be interpreted side by side with another example, the celebrated gold-mounted jasper ewer (fig.2), now part of the Museu Gulbenkian collection in Lisbon. Of the same size, they are designed with slight variations, namely the lid, the foot mounts and even on the garlands. The Gulbenkian example, in red-blood jasper and finely mounted in gold, was once part of the collections of the 12th Duke of Hamilton, and sold in his sale in 1882 to S.Wertheimer. It was subsequently with the Rothschild family until Calouste Gulbenkian acquired it from Henri de Rothschild in 1943. It carries the Maison de Commune marks for the period of 1734-5, which automactically indicate that the drawing on which the print was based were probably executed around 1730-34. 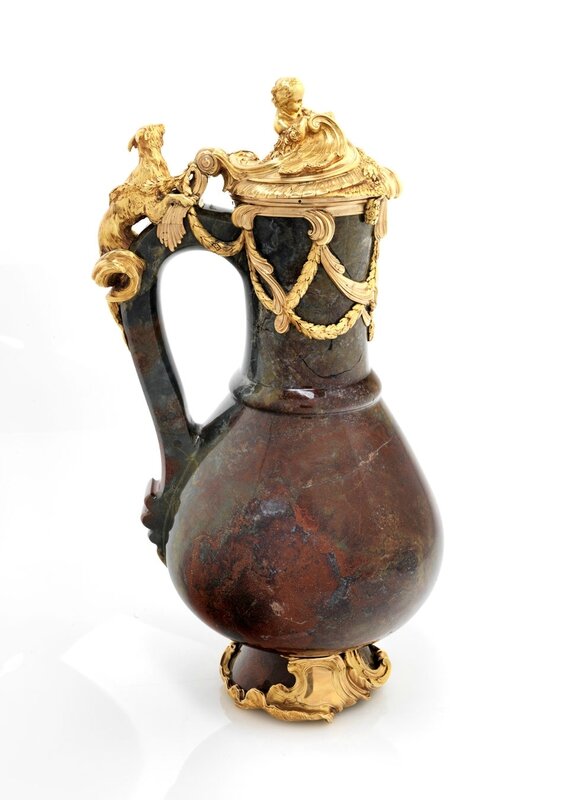 The first published association of Boucher designs with the Gulbenkian ewer was done by Simon Ricci in 1911 (Catalogue of a Collection of Mounted Porcelain Belonging to E.M.Hodgkins), but recently Peter Fuhring, in his seminal catalogue on Juste-Auréle Meissonier, discussed it  and suggested a new attribution of the mounts to the Rococo genius on the basis that the putto design was closer to Meissonier's style than Boucher’s and also the close contact the two artists had through their common publisher Huquier. It is a debatable supposition and even Fuhring is not conclusive, stating that “Et si Boucher a dessiné l’enfant, et eventuellement aussi la monture, ce que nous ne pensons pas, il est plus que probable qu’il s’est inspiré du travail de son ami”. The style of the putto nevertheless is very much in line with Boucher’s and even the combination of the goat with putto can be seen in one of his prints, “Fête de Baccus”, published by Huquier. This Boucher connection might have been what attracted Baron Edmond de Rothschild towards this piece, who famously put together a huge collection of Boucher prints and drawings, later donated to the Musée du Louvre.

Our attractive light brown jasper ewer, with its pear-shape, scalloped handle lower section and moulding to neck, follows a profile typical of prized receptacles  found in byzantine and medieval Treasuries. The Lisbon piece has traditionally been dated to the 14th century, however a study of the technique and patina of our ewer supports the idea that it was surely carved in the mid-18th century emulating the Gulbenkian’s gold-mounted example. The stone was carved in four pieces - neck, body, foot and handle - and presents a hole, to the interior. It was probably carved when conceived, in order to hollow it out, but the process was interrupted, as it was leading to cracks. These are noticeable in the body and at the time were filled with red paste, as confirmed by expert analysis, also explaining the flat gilt bronze cover, instead of a border rim, under the cover.

It is conceivable that the owner of the red jasper ewer, proud and aware of its uniqueness, ordered the piece studied here as a companion, in a comparable stone and mounted in gilt-bronze. Furthermore, one should also consider the possibility of amarchand-mercier, fascinated by the beauty of the gold-mounted piece already then celebrated by Boucher’s print, commissioning this remarkable work, probably a few years after the marked Lisbon example.

The admiration and respect towards a medieval shape and the whimsical Rococo creativity of François Boucher converge beautifully in these outstanding objects, making the creation of these ewers even more exceptional and possibly without parallel in the 18th century French decorative arts. Baron Edmond de Rothschild
The sale of Mrs. Walters in 1941 states a provenance for the current ewer as Baron E. de Rothschild, which we assume refers to Baron Edmond (1845-1934), although his cousin Edouard (1868-1949) was also alive during a similar period. Born into a dynasty of financiers and collectors, Baron Edmond de Rothschild continued his family’s passion for art and at the age of 13 was already collecting engravings, forming one of the most important collections of engravings and drawings in France. He was also friend of artists and generous benefactor to numerous art institutions, being elected member of the French Academy of Fine Arts in 1906.

He was also a prolific benefactor to scientific causes, establishing a foundation for scientific research bearing his name in 1921 and one of the leading supporters of Zionism, buying extensive areas of land and financing Jewish settlements in Palestine. When he passed away he left, among other works, 3,000 drawings and 43,000 prints to the Louvre, and an impressive collection of boxes and miniatures to his son James, now at Waddesdon Manor.

Mrs. Henry Walters
Sarah Wharton Green was born in 1859 into a prominent family of New England and North Carolina, growing up on her father’s plantation, “Esmeralda”, and enduring some difficult times during American Civil War. Sarah married the financier Pembroke Jones in 1884 with whom she had two children, Pembroke and Sarah, the former marrying the renowned architect John Russell Pope. Sarah and Pembroke Jones moved to New York where they managed to break into the closed upper echelons of New York society, entertaining lavishly and building an extensive art collection. Pembroke died in 1919 and three years later, Sarah married their lifelong friend Henry Walters, a railway magnate and art collector, who famously left his large collection to the city of Baltimore – now the Walters Art Gallery - when he died in 1931. Mrs. Walters lived for another ten years, selling her own collection with Parke-Bernet in 1941, which consisted mostly of 18th century furniture, statuary and tapestries, totalling then $600,000.

Georges Lurcy
Georges Lurcy (1891-1953), née Levy, was a French banker born in Paris in 1891, who worked with Banque Rothschild and became extremely successful dealing in securities. He fought in World War I and afterwards acquired the château of Meslay-le-Vidame where he stored his art acquisitions.

With the dawn of World War II, he changed his name and his American wife quickly convinced him to emigrate to America. The couple established themselves in North Carolina and New York, continuing their passion for collecting. Georges Lurcy passed away in 1953 and Parke-Bernet organized a historical three day sale, with many masterworks by Impressionist and Post-Impressionist painters and also important 18th century decorative arts, with the proceeds of the sale going to the establishment of a trust promoting the friendship between the American and French people.