A German parcel-gilt silver equestrian figure of St. George, most probably Melchior Gelb I, Augsburg, circa 1640

A German parcel-gilt silver equestrian figure of St. George, most probably Melchior Gelb I, Augsburg, circa 1640 Note: This striking sculpture was probably made as a dining table ornament, like the mounted equestrian drinking cups with detachable heads, which it resembles. A group of three such silver table sculptures representing Hercules, Omphale and Venus by Abraham II Drentwett, Augsburg, 1695-1700, are in the Hessisches Landesmuseum.1 These may have been part of a larger group, as the figure of Diana the Huntress by the same maker, in the same style was sold Christie's, Geneva, 18 November 1981, lot 192.

The figure in the present group is intently studying the ground for his prey, where a separate sculpture of the dragon, enemy of the Christian knight, could be imagined. An Augsburg ewer of 1654 in the form of an equestrian group, with the horse similarly jumping, not over a dragon but over a fallen Turkish warrior, was formerly in the collection of the Princes Esterházy von Galantha. It represents László Esterházy who died fighting the Turks at the battle of Nagyvezekény in 1652.2 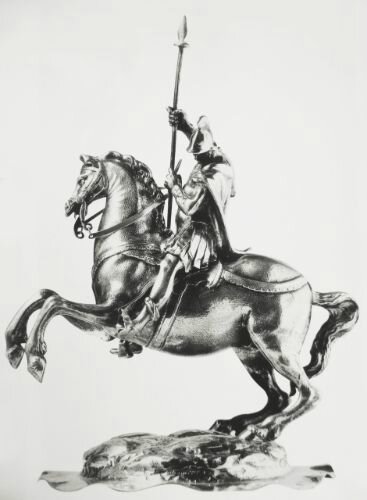 Melchior Gelb (1581-1654) was a precocious talent, co-working in 1605 with his later father-in-law on chased silver panels of the Crucifixion and the Descent from the Cross after the Italian sculptor Guglielmo della Porta (c. 1500-1577). He signed his work as journeyman for Pfelger long before he became a master of the Guild in 1616. One of these panels is in the Victoria and Albert Museum. His ability as a sculptor is evident in the surviving work which includes an Alpine Ibex (steinbock) drinking cup, very unusual tankards in the form of busts of young women with curled hair and necklaces and human figures worked into elaborate fountains for the drinking games which were then so popular.3