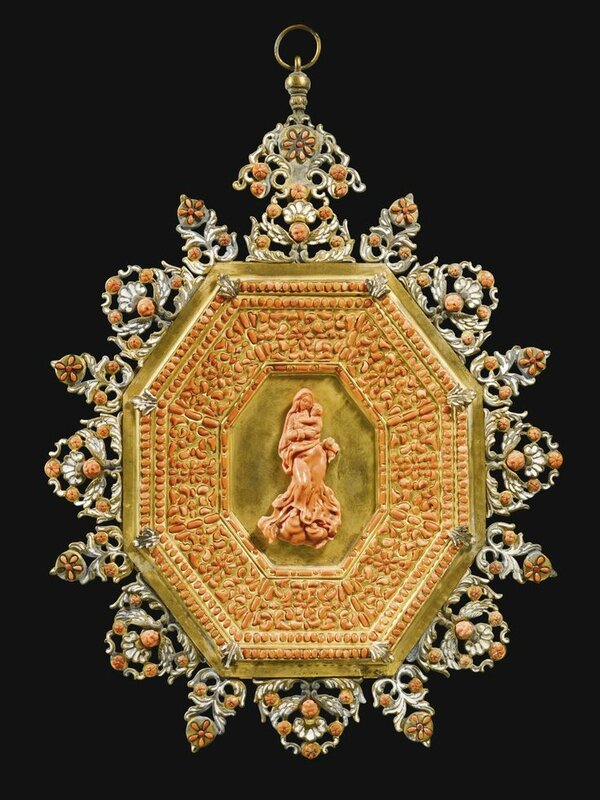 the reverse mounted with a later gilt copper relief with the arms of the Dandini family of Rome inscribed: EAM OMINE LAETO; coral mounted on partially enamelled gilt copper; 42.5cm., 17 3/4 in.

Note: Trapani was a leading centre for the production of works of art in coral in the 17th and 18th centuries.  Due to its geographical position and its exploitation of its natural resources and the use of its extensive coral banks, which continued well into the 18th century, Trapani became one of the principal commercial ports in the Mediterranean.  This growth resulted in the expansion of a prosperous merchant class, who, together with the wealthy clergy, contributed to the development and growth of a high level of coral and goldsmith's work.  In 1628, the guild of the coral workers, the Arte dei Corallari, was established in Trapani and after the suppression of the insurrection there in 1672, the skilled coral workers were dispersed to other Mediterranean centres.

Coral was considered a very precious and rare commodity in the 16th century due to the difficulty in extracting it and around this time collectors were growing increasingly interested in the Natural Sciences. Coral was esteemed both for its colour and unusual texture and it was believed (as was the case in antiquity) to have the power to ward off the 'evil eye'. Coral was originally used as entire 'coral trees', usually mounted on a base. However, from the late 16th to the 18th century, sections of coral were used as decorative elements on works of art.

A related octagonal Trapani frame was sold in these rooms as part of the collection of Luigi Koelliker on 3 December 2008, lot 50.