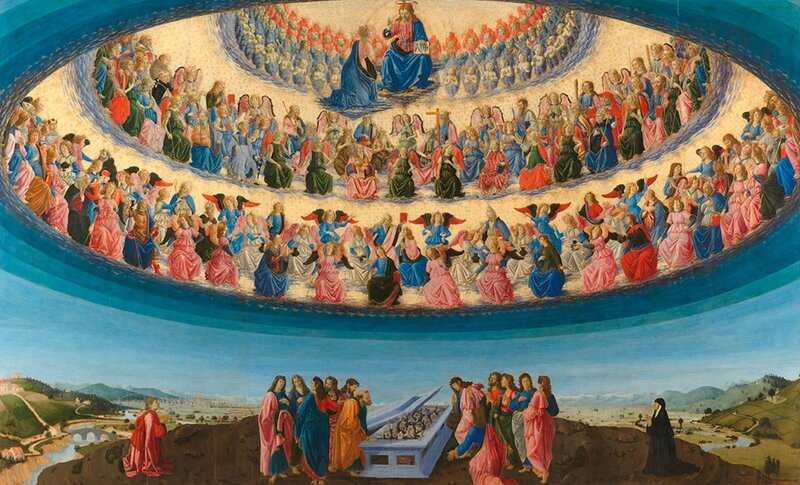 LONDON.- With a record-breaking 6.4 million visits during 2014, the National Gallery remains committed to researching its collection and offering visitors a unique insight into the history and many stories that still lay undiscovered in its paintings. The exhibition 'Visions of Paradise: Botticini’s Palmieri Altarpiece' (on view from November 4th to February 16th 2016) is the culmination of three years of research on Francesco Botticini’s monumental altarpiece (228.6 x 377.2 cm) of the Assumption of the Virgin , completed in about 1477 for the funerary chapel of Matteo Palmieri (1406 – 1475) in the church of San Pier Maggiore in Florence.

The exhibition will explore the fascinating life of Matteo Palmieri, the man who commissioned the 'Assumption of the Virgin'; the powerful, wealthy and aristocratic circles he moved in, with special attention given to his friendship with the Medici rulers of Florence and the King of Naples; and will provide new insight into the painting he intended to serve as his legacy.

Palmieri, who is portrayed kneeling at the lower left of the panel, was a true ‘Renaissance Man’ who trained in his native Florence as an apothecary, studied philosophy and rhetoric with the top humanist scholars of the period, wrote histories, biographies and poetry and held almost every position within the Florentine government including that of 'Gonfaloniere di Giustizia', the city’s highest political honour.

Palmieri’s study of classical literature including Cicero, Plato, Quintilian, Plutarch and Aristotle and his participation in the intellectual debates popular among civic humanists of the period, shaped his view of civil society and inspired him to write a treatise entitled 'Della Vita Civile' (On Civic Life, 1439) which describes the ideal citizen. He was also an avid reader of the poets Boccaccio and Dante and wrote an epic poem in imitation of Dante’s 'Divine Comedy', entitled the 'Città di Vita' (City of Life, 1465), which similarly describes the poet’s journey through Heaven, Hell and Purgatory. Palmieri commissioned Botticini to illustrate the deluxe manuscript of his poem and, several years later, selected him to decorate his funerary chapel. Together, Palmieri’s civic treatise and Dantesque poem reveal his conceptions of civic duty and the nature of Heaven and Paradise, all of which are reflected in the dramatic composition of Botticini’s 'Assumption of the Virgin'.

The exhibition will explore the creative collaborations between Palmieri and Botticini. Palmieri reportedly advised the painter on the design of this vast panel which incorporates a broad panoramic landscape of Florence and its surroundings in the lower register and an extraordinary dome of Heaven populated with saints and angels in the upper. The panel, which was hung several metres off the ground at the entrance to the National Gallery’s Sainsbury Wing in 1991, has been off display since 2011 and this exhibition will be the first opportunity to view the painting up close and in detail in almost 25 years. The show will be also be the first to address the centuries of debate about the painting’s attribution to Botticelli, and the close artistic network of painters working in Florence in the 1470s including Botticini, Botticelli, Verrocchio (who taught Leonardo) and the Pollaiuolo brothers.

After Palmieri’s death, his poem, the 'Città di Vita', was deemed heretical by several theologians and scholars for its provocative ideas about the origins of the human soul and the notion of Free Will. By association, his altarpiece was also condemned. The exhibition will explore the purportedly heretical ideas Palmieri promoted in his poem and will explain how this censure has affected our understanding of the painting for centuries.

The history of Botticini’s altarpiece is closely bound to that of another important work in the National Gallery Collection, a monumental polyptych by Jacopo di Cione and his workshop, made for the high altar of San Pier Maggiore around 1370 and which includes a painted representation of the church. This polyptych is said to have been subsequently dismantled and re-located to the same chapel as Botticini’s 'Assumption'. The exhibition presents a singular opportunity to see Jacopo’s altarpiece reconstructed as its many fragments hang separately in the Sainsbury Wing which cannot accommodate it in its entirety. To better understand the original function and contexts of both works, the show will include a specially designed three-dimensional digital architectural reconstruction of the church of San Pier Maggiore, a building largely destroyed in the 18th century, using surviving archival, archaeological and visual material.

The exhibition will feature around 30 works, including paintings, sculpture, drawings, prints, manuscripts and a bronze medal from institutions including: The Metropolitan Museum of Art, New York, the Nationalmuseum Stockholm, the Biblioteca Medicea Laurenziana, Florence the Museo Nazionale del Bargello, Florence, the Accademia Carrara, Bergamo, The Credito Bergamasco, Bergamo and The British Museum, The British Library and the Victoria and Albert Museum in London.

Dr Jennifer Sliwka, Ahmanson Curator in Art and Religion at the National Gallery said: “For centuries, authors, poets and painters have used the ‘vision’ as a motif for exploring and expressing deeply-held desires and beliefs about human identity, the nature of the Universe and of the afterlife. 'The Assumption of the Virgin' is a painted collaboration between an artist and patron in which the patron’s visions of Paradise, both the ideal city on Earth and in Heaven, are realised.”