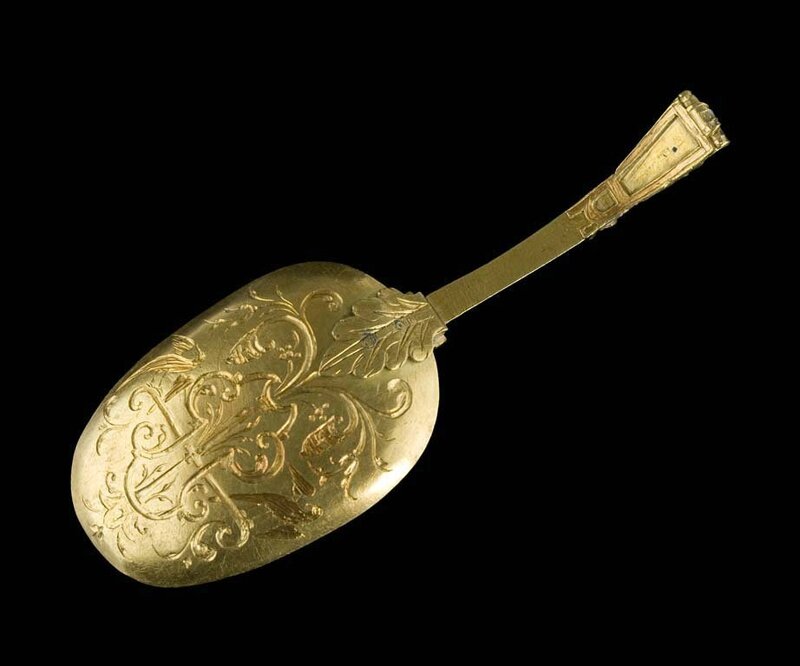 This elaborate gold and black enamel spoon of Peruvian and Spanish origin is one of the most beautiful artifacts rescued from the Atocha. The bowl and neck of the 22k gold spoon is decorated with scrolling flora and birds. Nature designs were popular in Peru and Europe at the time; however, the serene masculine face flanked by condors, a symbol of royalty among the Inca people, decorating the end of the spoon's neck is unusual. Decorative heads similar to that of this spoon have been found on silver ewers (pitchers) also found with the ship. During the 17th century, however, it was rare for an object to be decorated with a face; if it was, the face would likely be a woman's or grotesque resembling a gargoyle. Intricate gold spoons like this one were often reserved for ceremonial purposes, such as dispensing holy water and consecrated wine, or to distribute commodities of great value like sugar or salt. The stem portion of the spoon is very short; it was not until the end of the 16th century that the stem was lengthened to allow ease of use with the new fashionable ruffled collar. This artifact is from Deo Fisher's personal estate.