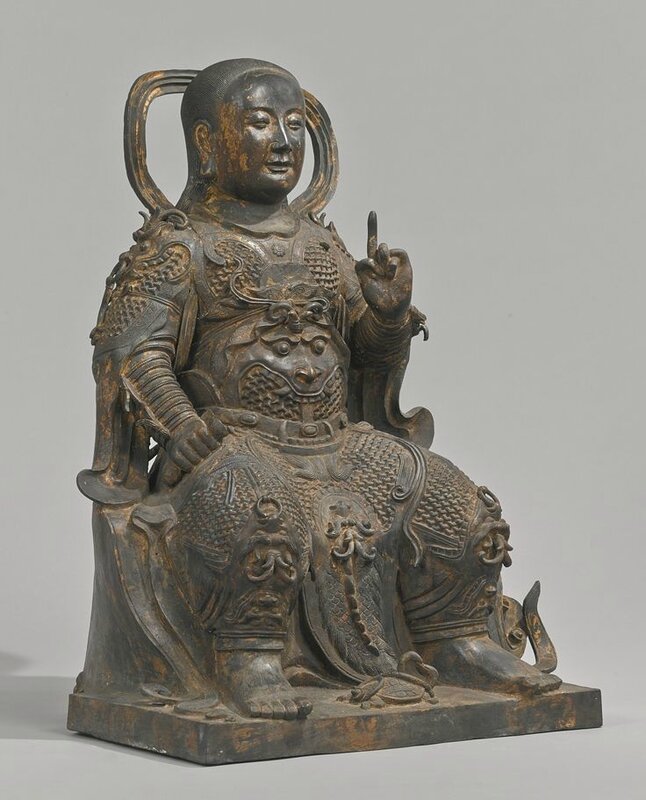 majestically seated with the right hand holding a sword handle and the left hand held in the deity's characteristic mudra, wearing scale-armor with shoulder, knee, stomach and apron guards decorated withyazi dragon masks, the well-proportioned head framed by a billowing celestial scarf, the face with serene yet powerful expression below the long slicked-back hair trailing down the back, a tortoise with entwined snake resting between the bare feet. Height 31 in., 78.7 cm

Notes: The long combed-back hair and bare feet are two of the most salient indicators of Zhenwu's identity, the others being the tortoise and snake, and the deity's characteristic mudra. This mudra is Daoist and is used to cast out evil. The upright index finger represents Zhenwu, and the other fingers and thumb each represent one of the four directions.

In this particularly finely cast example, the deity sits in a formal position, barefoot, with his long hair combed back and hanging loose down his back. The curvature of the sleeves, the asymmetry of the scarf over his shoulders and the ends of the scarf with one end lying flat and the other curling, give the otherwise static image a sense of motion. The detail of the armor appears true to life. From the bindings, loops and straps it is possible to see how the armor was worn, Each of the scales in the armor stands out sharply. These type of scales were called 'mountain' scales because each piece resembled the Chinese character for mountain. When assembled into a plate, they would allow the plate to flex in one direction, allowing for movement, but not in the other, thereby affording protection.

According to Richard G. Wang, The Ming Prince and Daoism: Institutional Patronage of an Elite, New York, 2012, p. 174, Zhenwu, being associated with the north, was already venerated by the Northern Song dynasty military during their efforts to secure the northern frontiers. It was during the Ming dynasty however, that Zhenwu reached the height of his popularity. The third emperor of the Ming dynasty, Yongle (1403-1424), credited Zhenwu for his successful ascension to the throne, declaring that he was under Zhenwu's protection. He ordered numerous temple complexes built in honor of the god at Wudang Shan, the mountain where Zhenwu is believed to have ascended to heaven. His construction projects took 20,000 men twelve years to complete. All subsequent Ming emperors allocated funds for the upkeep of the buildings, and were represented by their favorite eunuchs at religious ceremonies on the mountain. By the middle of the 15th century, Zhenwu had become the most important god in religious Daoism.

An almost identical Ming dynasty figure in the collection of the Wudang Museum is illustrated in a paper by Christopher Todd Stoll, Representations of Xuantian Shangdi in Devotional Art and Literature, Hubei, 2014, p. 117, section B14, fig. 2.  A smaller figure, dated first year of Tianshun (corresponding to 1457) was sold in our London rooms, 15th May 2013, lot 150.