A cafe-au-lait-glazed dish, Yongzheng six-character mark in underglaze blue within a double circle and of the period (1723-1735)

A cafe-au-lait-glazed dish, Yongzheng six-character mark in underglaze blue within a double circle and of the period (1723-1735) 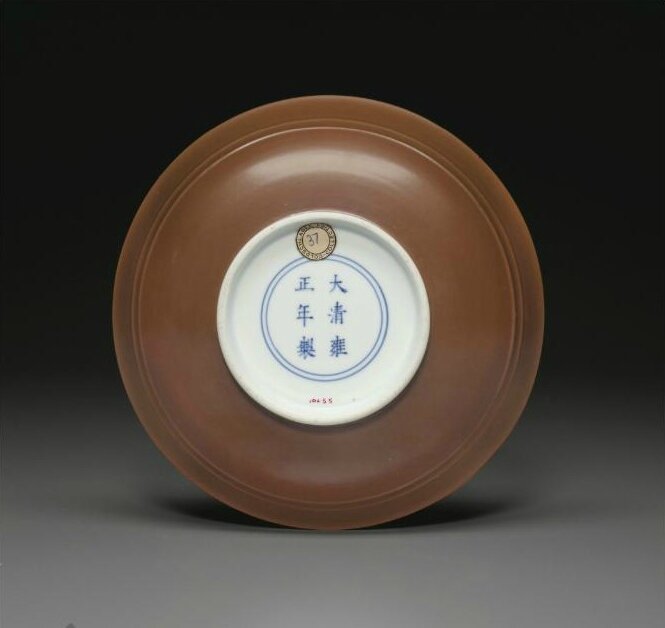 The dish has rounded sides that flare towards the slightly everted rim and are encircled by two bow-string bands, and is covered inside and out with a glaze of rich cafe-au-lait color. 6 5/8 in. (17 cm.) diam., box

Note: Dishes of this type appear to have been first made during the Kangxi period (1662-1722), and one in the Percival David Foundation is illustrated in Oriental Ceramics, The World's Great Collections, vol. 6, Tokyo, 1982, no. 233. The eight-character mark on the base may be translated, 'made for the Zhonghe Pavilion in the renzi year of Kangxi', corresponding to 1672. Yongzheng-marked examples are represented by one illustrated in Old Oriental Ceramics Donated by Mr. Yokogawa, Tokyo National Museum, 1953, pl. 389; one included in the exhibition, Chinese Antiquities from the Brian S. McElney Collection, Hong Kong Museum of Art, 1987, no. 100; and another from the T. Y. Chao Collection included in the exhibition, Ch'ing Porcelain from the Wah Kwong Collection, 1973, no. 35. Another in the Asian Art Museum of San Francisco is illustrated by He Li in Chinese Ceramics, New York, 1996, p. 285, no. 173. See, also, another example in the Tianjn Museum illustrated in Porcelain Collected by Tianjin Museum, Beijing, 2012, p. 176, no. 152.

Commentaires sur A cafe-au-lait-glazed dish, Yongzheng six-character mark in underglaze blue within a double circle and of the period (1723-1735)