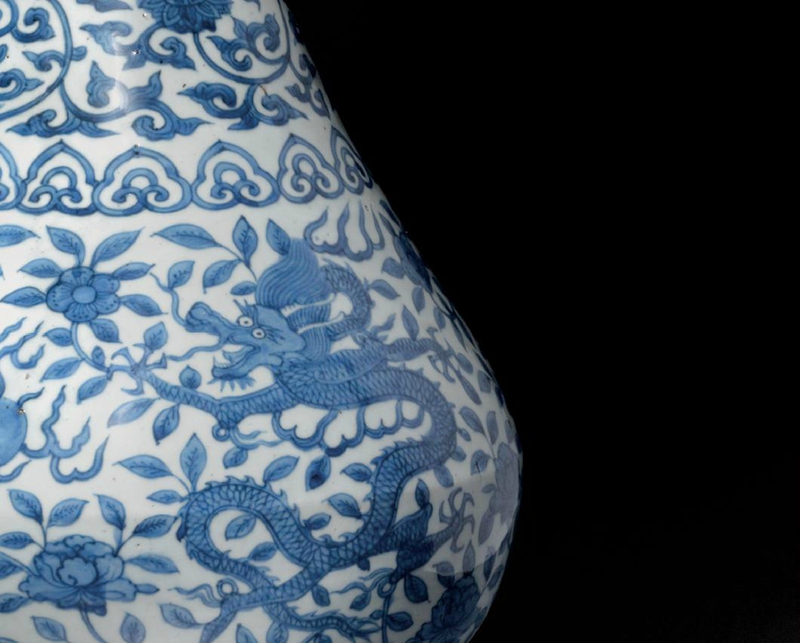 The globular body is painted on each side with two five-clawed dragons contesting a flaming pearl amidst composite floral scroll, beneath a band of ruyi heads. The waisted neck is decorated with a wide band of lotus scroll, and the bulbous mouth with lanterns suspending cash emblems, vajra, pearls, and conch shells below a band of pendent leaf tips. 21 ½ in. (54.6 cm.) high, wood stand, Japanese wood box

Notes: This vase belongs to a group of rare Wanli mark and period porcelains which were decorated with similar – sometimes identical - themes, some in underglaze blue and others in underglaze blue combined with overglaze enamels in wucaistyle. One of the most successful forms within this group is the garlic-mouth vase (or garlic-headed vase suantouping), as exemplified by the current blue and white example. Interestingly fewer of these garlic-mouth vases with underglaze blue decoration appear to have survived compared to those decorated in wucai style. The form lent itself particularly well to the division of the decoration into three distinct bands: one around the garlic-head mouth; one around the neck; and the largest around the globular body. These divisions have been used to especially good effect on the current vase on which the mouth is decorated with leaves and pendent jewels; the neck is ornamented with a lotus scroll and the body has five-clawed dragons flanking flaming pearls amongst peony scrolls. The inclusion of imperial dragons is a relatively rare feature, since the majority of such vessels have a lotus pond with either ducks or fish encircling the lower section.

Of the two underglaze blue-decorated Wanli vases of this form in the collection of the Palace Museum, Beijing, illustrated in The Complete Collection of Treasures of the Palace Museum – 35 – Blue and White Porcelain with Underglaze Red (II), Hong Kong, 2000, p. 176, no. 165 and p. 178, no. 167, one is decorated on the lower part with fish in water and the other has the same lotus scrolls which ornament its mouth and neck bands. Five garlic-mouth vases decorated in wucai style are illustrated in The Complete Collection of Treasures of the Palace Museum – 38 – Porcelains in Polychrome and Contrasting Colours, Hong Kong, 1999, pp. 27-31, nos. 24-28. Of these only one (no. 28) is decorated with dragons, which, like those on the current vase are depicted amongst floral scrolls and flanking flaming pearls. Two of the Palace Museum wucai vases (nos. 27 and 28) share with the current underglaze blue vase the feature of a band of pendent jewels around their mouths. This distinctive and attractive jewel motif became popular on fine-quality vessels decorated in fahua style in the latter part of the 15th century (see Rosemary Scott and Rose Kerr,Ceramic Evolution in the Middle Ming Period, London, 1994, p. 25, nos. 34 and 35), and gained popularity on blue and white porcelains in the Jiajing and Wanli reigns.

Two Wanli garlic-mouth vases decorated in wucai style in the collection of the National Palace Museum, Taipei are illustrated in Porcelain of the National Palace Museum, Enamelled Ware of the Ming Dynasty, book III, Hong Kong, 1966, pp. 30-1, pl. 1, and pp. 32-33, pl. 2. The first of these is decorated in its lower band with dragons amongst floral scrolls flanking flaming pearls, similar to those on the current blue and white vase, while the second National Palace Museum vase shares with the current vase pendent jewel decoration around the mouth. A blue and white garlic-mouth vase with dragons around the lower body, but with different minor bands to the current vase, is illustrated in Chinese Ceramics in the Idemitsu Collection, Tokyo, 1987, no. 745, while a pair of similarly shaped vases decorated with aquatic birds in wucai style is illustrated as no. 747. A large Wanli blue and white garlic-mouth vase decorated with dragons from the Jingguantang Collection was offered at Christie’s Hong Kong, 28 April 1997, lot 681.

Several vases related to the current blue and white example have some areas of similar decoration, but have a dragon and phoenix flanking a flaming pearl amongst floral scrolls, instead of the paired dragons seen on the current vase. A Wanli wucai garlic-mouth vase from the Chang Foundation, illustrated in Selected Chinese Ceramics from Han to Qing Dynasties, Taipei, 1990, p. 256, no. 109, is one of these, but shares with the current vase a jewelled band around the mouth. A Wanli blue and white garlic-mouth vase with dragon and phoenix decoration, formerly in the B.S.N. Niigata Hoso Museum, Japan, was sold by Christie’s Hong Kong 1 June 2011, lot 3591.