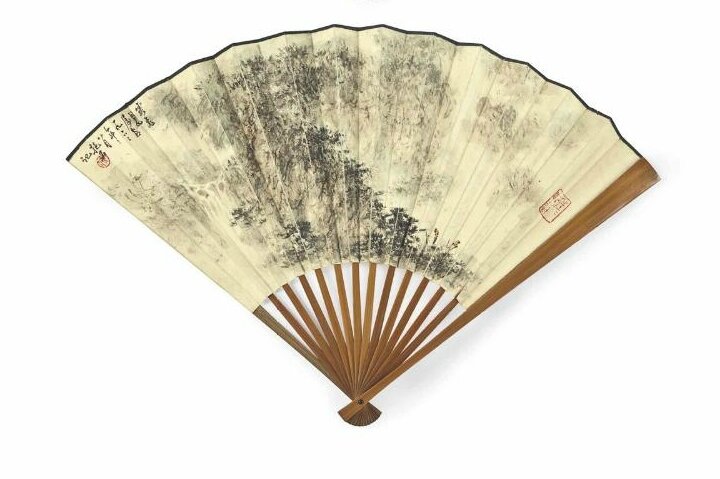 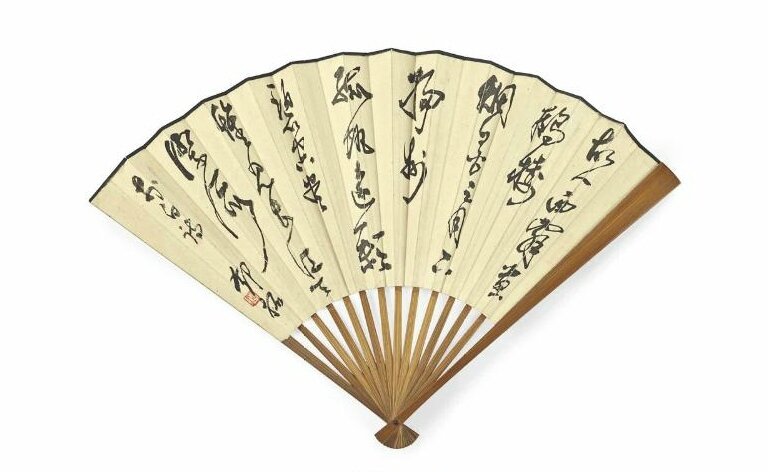 Property from a Private American Collection

Notes: According to tradition, Chinese artists were encouraged to read 10,000 books, travel 10,000 miles, and study 10,000 paintings. This fan, painted near the end of Fu Baoshi's life when he was fully matured and publicly appreciated as a great painter, reveals Fu's embodiment of these experiences. In his youth, Fu Baoshi made a concentrated and comprehensive study of Chinese art history, a process that continued throughout his life as a teacher and artist. In the years just before this fan was painted, in addition to short local trips, Fu, along with several fellow artists, embarked on two extended journey during which they observed and sketched famous natural scenes. His trip in 1960 included treks through Hubei province, referenced in the poem inscribed on this fan. These experiences heightened Fu Baoshi's connection with China's landscape and inspired him to write: "The mountain-water images become my spokespersons, or I am their spokesperson." (as translated by Anita Chung in Chinese Art in an Age of Revolution: Fu Baoshi (1904-1965), 2011, p. 24.) The literary tradition is firmly incorporated in this work through the poem by Li Bai (701-762) inscribed on the fan's reverse by Deng Tuo, the influential poet and journalist. The poem "At Yellow Crane Tower Taking Leave of Meng Haoran as He Sets Off for Guangling" clearly inspired Fu Baoshi's depiction of two figures traveling together in a vibrant and dense mountain landscape and in this way combined the best of China's arts.

An old friend takes leave of the West at Yellow Crane Tower,
in misty third-month blossoms goes downstream to Yangzhou.
The far-off shape of his lone sail disappears in the blue-green void, and all I see is the long river flowing to the edge of the sky.
-Translated by Burton Watson