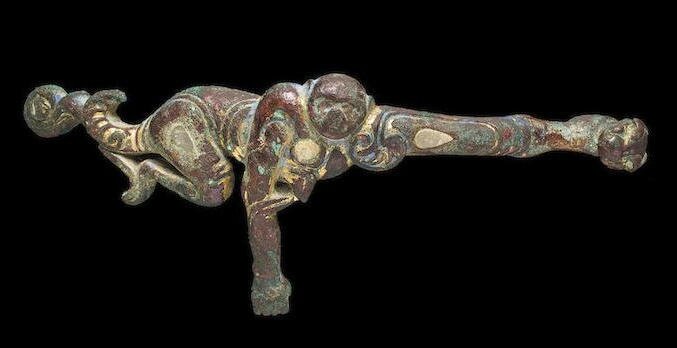 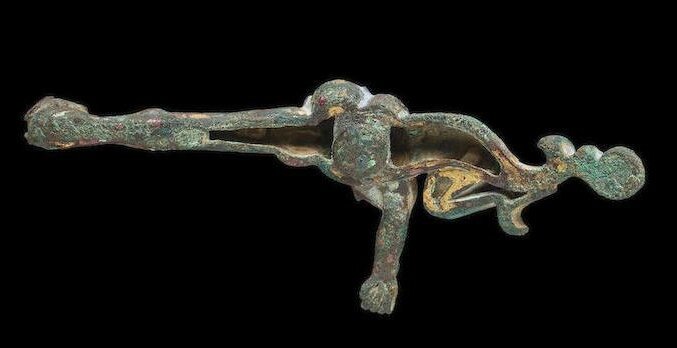 Hollow cast as a lanky monkey resting along a branch on its stomach, the body entwined with vines, one arm hanging loose, the other arm wrapped around a branch, the branch ending in a dragon-head terminal, retaining remnants of a gilt surface and inset with clear glass inlays, the reverse with a round button for attachment. 6 1/4in (16cm) long

Notes: A turquoise-inlaid gilt bronze belt hook similarly formed as a monkey with arms outstretched ahead and downwards, dated to the Eastern Zhou period, is illustrated by G. Eskenazi, A Dealer's Hand: The Chinese Art World Through the Eyes of Giuseppe Eskenazi, London, 2012, p. 197, pl. 55.

The same hook was also included in the exhibition Nomadic Art of the Eastern Eurasian Steppes: The Eugene V.Thaw and Other New York Collections at the Metropolitan Museum of Art, New York in 2002, and published in the Catalog, p. 146, no. 122, where the author notes that the monkey was "a popular motif of late Eastern Zhou and early Western Han art, [and it] is frequently encountered on decorations in bronze... another comparable example is a silver belt hook excavated at Qufu, Shandong Province, the site of the ancient capital of the state of Lu, which dates to the fourth century B.C. (Qufu Lu guo, 1982, pp. 159-60, figs. 106, 107)."