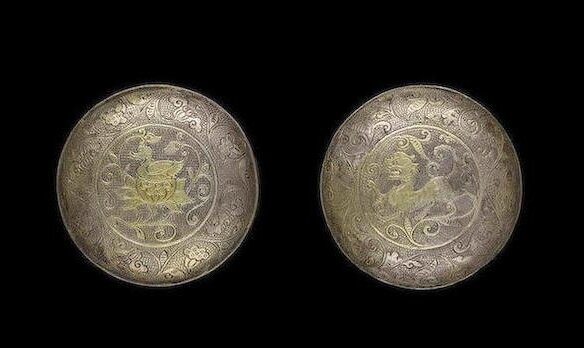 The box and cover finely worked with bands of foliate scrolls on a stippled ground, enclosing on the slightly domed cover a roaring lion and on the flattened box a duck perching on a flowering lotus pod, fitted box.

Notes: The lion is an animal not native to China, and the Chinese term 獅子 shizi may be derived from the Persian šír: see C. Michaelson, Gilded Dragons: Buried Treasures from China's Golden Ages, London, 1999, p. 122. The association of the lion with Buddhism, and with the promulgation and defence of this religion, may explain its popularity on Tang period objects. The lotus too bears Buddhist connotations of purity, whilst also symbolizing fertility with its prominent seed pod, and the mandarin duck is associated with conjugal happiness. Pairs of ducks are more commonly found on Tang pieces, whilst the single duck with a lotus is more rare. The combination of all these subtle references is indicative of the cosmopolitan and religiously diverse Tang period, and its pervasive influence on later Chinese dynasties.