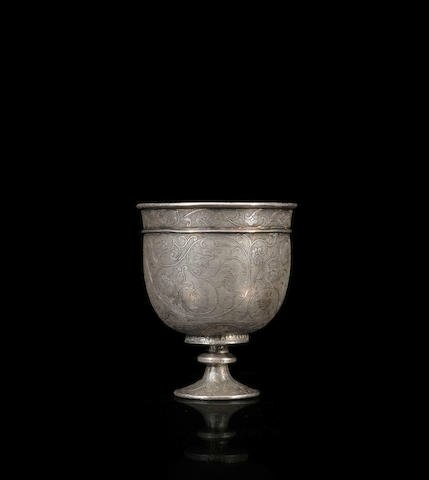 Of graceful form, the deep cup exquisitely chased and engraved in a wide band with a delicate continuous meander issuing leaves and palmette-shaped blossoms, beneath a rib and a further floral scroll below the rim, the cup above a flange decorated with saw-tooth motif and all raised on a knopped stem and flaring recessed foot further engraved with floral scrolls.

Notes: Precious Tang silver pieces have long fascinated scholars and collectors from East to West, their universal appeal perhaps reflecting the cosmopolitan nature of the period in which they were produced. The use of precious metal and the elaborately ribbed and flanged stem cup form appear to be based on Sassanian vessels, adopted in China first as a novelty, but later integrated into religious ceremony: see M. Medley, Metalwork and Chinese Ceramics, London, 1972, p. 5, and Qi, Tang dai jinyinqi yanjiu, Beijing, 1999, p. 408.

Similar cups have been excavated at Tang sites in Shaanxi Province, including one included in a burial cache unearthed at Hejiacun within the Tang period walled city of Chang'an (modern Xi'an) and another found in a reliquary chamber at Qingshan Temple in Lindongxian. The construction of this monastery was documented in an inscription dating the final re-building to 741: see C. Michaelson, Gilded Dragons: Buried Treasures from China's Golden Ages, London, 1999, pp. 59-63 and 130-137 for a discussion of Tang hoards in tombs and temples.

A nearly identical silver stem cup sold at Sotheby's London, Masterpieces of Chinese Precious Metalwork, Early Gold and Silver, sale 8211, 14 May 2008, lot 47, and the same piece is illustrated in Bo Gyllensvärd, Chinese Gold and Silver in the Carl Kempe Collection, Stockholm, 1953, pl. 102. A related stem cup but of more squat form sold at Christie's New York, The Collection of Robert Hatfield Ellsworth, Part IV, 20 March 2015, lot 727. Another cup of more similar form, but of less precious bronze, is in the collection of the Freer Gallery of Art, no.F1911.70, the gift of Charles Lang Freer.