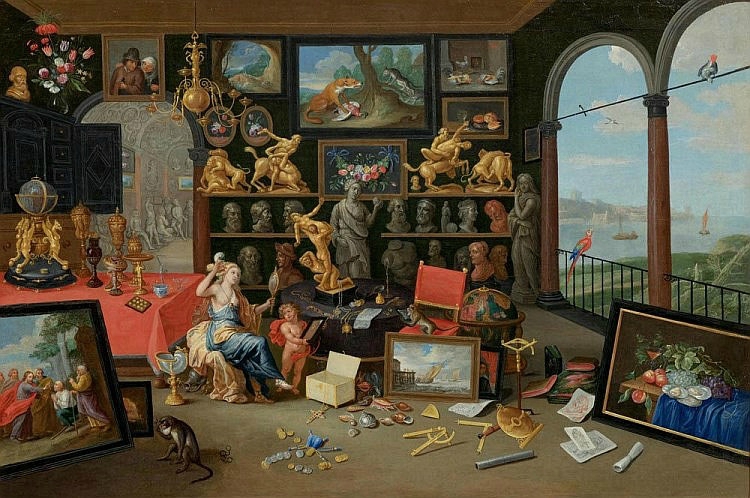 Notes: In a richly furnished with paintings, sculptures and objets d'art gallery space sits a female character who is as it were to be interpreted as Venus or Juno, with a mirror at the toilet right next to it holds a Amor or putto in front of her is also a mirror. Further to the right, the view opens to a wide river landscape with the city of Antwerp in the background. The thus arranged objets d'art and curiosities are to be understood in the context of the suggestive to vanity figure in the center as an allegory of the vision. In fact, was' the sense of sight (...) since the early modern period as the main body of knowledge and was rated highest among the five senses. At the same time he was theologians as a source of seduction by the sensual and material temptations of life. The spread in the Kunstkammer collection objects cause the positive and negative aspects of the face in front of their ambivalence '(Wettengl 2002, pp 385-386). The scientific instruments allude to the benefits of scientific research in the world and their discovery, which resulted in Antwerp's rise to commercial city and came to that wealth, who promoted the arts and sciences. The lying in the middle coins and shells indicate exoticism, knowledge but also points to vanities. They range from a still life with fruit and oysters and the painting 'Christ Healing the Blind'. The Still Life, especially the oysters shown therein, stands for the seduction of man by the vision and the consequent shallowness of his existence. This statement is highlighted by the monkey while wearing glasses sitting in front of the painting, but is still unable to reach higher insight again. The spiritual vision and the role of painting as a medium of knowledge are therefore the focus of this Kunstkammer image which has been implemented by Jan van Kessel with the finest brush strokes and a high aesthetic appeal provides. Like his uncle, Jan Brueghel d. J., and many painter of his time, van Kessel linked with the offered here painting the paintings Jan Brueghel d. Ä. at. Thus, the composition is based on the 'Allegory of the face' and the 'Allegory of the hearing' by Jan Brueghel d. Ä. and Peter Paul Rubens from the year 1617, today in the Museo del Prado in Madrid (Inv No 1394 and 1395, see Ertz, Klaus:.. Jan Brueghel the Elder (1568-1625), Lingen 1979, p 332, Kat.. . no. 327 and S. 350, cat. no. 329, fig. 399 and 420). Even more pronounced compared to is 'Venus and Cupid in a gallery space' by Jan Brueghel. d, (no. 1660, oil on copper, 58 x 90 cm, Inv. 656). J. today at the Philadelphia Museum of Art. In its opinion Klaus Ertz dated the painting offered here 1650-1670, Kurt Wettengl 1650 -60 (see literature). Stylistically similar compositions Jan van boiler d. Ä. are about the counterparts 'Cabinet with cherubs' of 1664 from the Palazzo Pitti in Florence (Inv. 1890 no. 1216 and 1199, oil on copper, 19 x 25 cm) or the 'art chamber with allegory of the face' of Antwerp privately owned is dated 1659 (see Bernt Walther:. The Dutch painter and draftsman of the 17th century, Munich 1969, vol II, # 658.). The central figure of Juno or Venus and the cherub or Amor and the ancient sculptures in front of the rear wall in our paintings this could have been from Abraham Willemsen (active ca. 1627-1672 Antwerp) painted, so the assumption in the auction catalog from 1991, whose Klaus Ertz followed in his report.