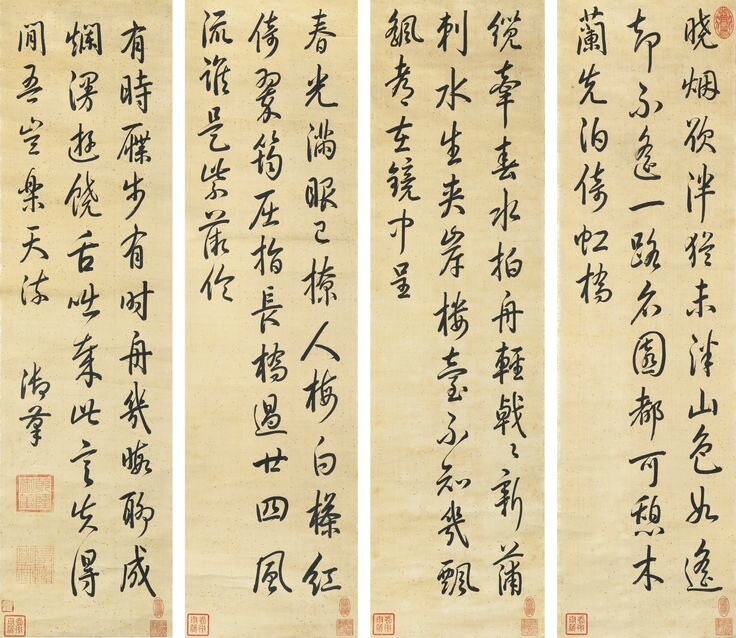 Notes: When Emperor Qianlong traveled south on an inspection tour to Yangzhou in 1751, one particular scenic site, Pingshan Hall, left him so deeply impressed that he would return eight more times in the next three decades and compose thirty-eight poems in fond memory.

This is a rare opportunity to view Qianlong’s calligraphy outside of China. An abundance of his writings and paintings survive but relatively few made their way into Western collections. Even during periods of war and starvation, the Chinese people held on to Qianlong’s artworks through government and private efforts. As a result, more than two thousand artworks are preserved in the Beijing Palace Museum today but less than twenty are available to the general public in the West. The Comprehensive Illustrated Catalog of Chinese Paintings counts eight Qianlong paintings outside of China with no mention of calligraphy. They are scarce in both American and European auctions. A quick Artnet search returns nine auction records in the U.S., U.K. and France combined, versus an astonishing four hundred and eighty nine artworks circulating in the Chinese markets. Emperor Qianlong atop a horse.

It is important to study Qianlong’s calligraphy because of his significant role in history, his artistic talent, not to mention his popularity as a subject of TV shows and movies. Economic benefits are foreseeable too if his artworks continue to gain popularity in the art markets of tomorrow as they have in the past decade. Lot 607, titled A Revisit to Pingshan Hall, is a classical representation of Qianlong’s mature running script calligraphy executed around his sixties or seventies. The style is distinct: individual characters are ideally proportioned, brushstrokes are consistent in width, and the overall layout is rhythmic and neat. Qianlong is often criticized for being more competent than creative. His lines and corners appear fluid but are actually controlled and repetitive. Lack of originality is often a fatal flaw for an artist, but in Qianlong’s case it was a deliberate choice, more specifically a diplomatic preference for formality over creativity. Practicality was the key. Qianlong received considerable training from the best teachers of his day. His calligraphy demonstrates mastery of Dong Qichang’s ornamental techniques while adhering to strict rules and standards set forth by Ming dynasty predecessors in the Guangeti tradition. As a result, his calligraphy appealed to the popular tastes of his contemporaries, acknowledged traditional practice, and illustrated the etiquette of the orthodox court academy.

Qianlong authored the poem A Revisit to Pingshan Hall during or shortly after his third Southern Inspection tour. By travelling frequently to Yangzhou, he strengthened the bond between that locale and the court, and at the same time asserted his control as a Manchurian ruler of Han China. Qianlong is one of the most celebrated emperors in Chinese history not only because of his military and political accomplishments but also because we know so much about him as a charming poet and artist. His legend lives on in his artworks.“Art like religion deals with inner reality.” This is the opening sentence of George Rowley’s bookPrinciples of Chinese Paintings. Since the Tang dynasty, the Chinese believed in making educated assumptions of one’s personality based on their calligraphy. The same theory is called graphology in art therapy and handwriting analysis in FBI labs. We see from Qianlong’s calligraphy a disciplined and diplomatic personality. As an amateur artist, he was more diligent and prolific than many professionals were. In his capable years, he undertook a workload of approximately two poems a day and one artwork every other week, which culminated in some forty thousand poems and twenty-five hundred artworks at the end of his life. Most of his calligraphy maintains a relatively consistent style, which is neat and suave. Although often criticized for a lack of spontaneity, this rigidity is likely the outcome of diplomatic concerns too, since most of his calligraphies serve the purpose of social engagements. Tianhan Gao