A gray stone head of a bodhisattva, China, Tang dynasty

A gray stone head of a bodhisattva, China, Tang dynasty 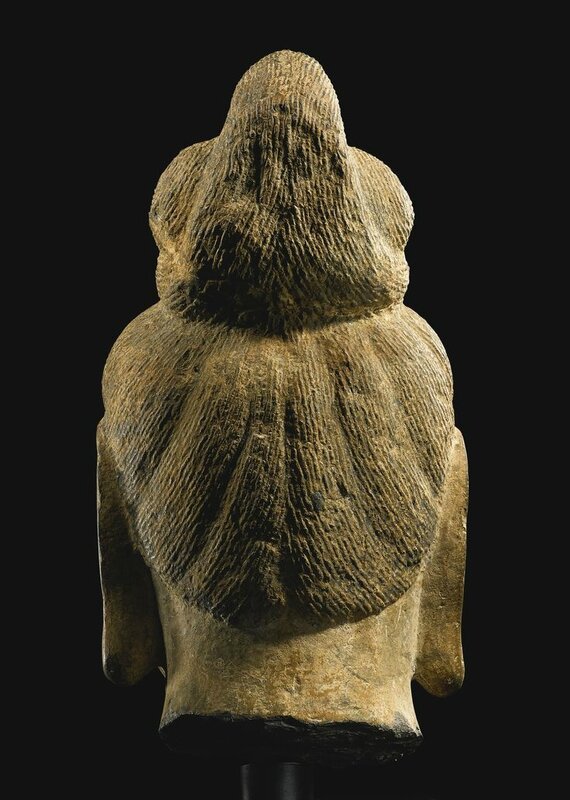 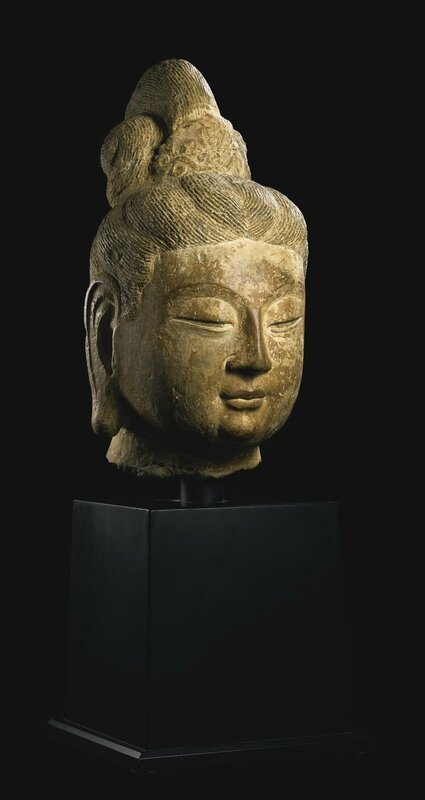 the full face well-carved with angled downcast eyes and elegant curved brows flanking a refined nose, above full lips curved in a gentle smile, the hair parted into sections, pulled back and gathered into a coiled topknot behind a stylized blossom, all between large ears with pendulous earlobes, the surface with traces of pigment. Height 19 1/2  in., 49.5 cm

Exhibition: Yamanaka & Company, Collection of Chinese and Other Far Eastern Art, (in liquidation under the supervision of the Alien Property Custodian of the United States of America), New York, 1943, cat. no. 392.

Notes: This Bodhisattva head is remarkable for its impressive size as well as its sensitive carving style. The full fleshy face, narrow slit eyes, sharply carved, arched brows which form a harmonious curve with the ridge of the nose, as well as the coiffure with hair drawn back into a high chignon, can be considered as the classic style of the Bodhisattva image in the early Tang dynasty (618-907). Sculptures with related features are well known particularly from the Longmen Caves south of Luoyang in Henan province, but became the favorite style to depict Bodhisattva figures also in other areas. It can be considered a fully matured style, when the Buddha, Bodhisattvas and monks were rendered in a distinctly Chinese manner, and the image of Guanyin, the Bodhisattva Avalokitesvara, became more and more feminine in concept.

The move of the Northern Wei capital to Luoyang in AD 494 gave rise to the construction of the Buddhist grottoes of Longmen near Luoyang in Henan province, which together with Dunhuang and Yungang can be considered the greatest Chinese cave temples. Construction of the whole temple complex, which is said to contain some 100,000 sculptures in 1,400 caves, continued from around AD 494 in seven stages through the Northern Wei (386-534) into the Northern Qi period (550-577), with a revival, after a quieter interval, under the Tang Emperor Gaozong (r. 650-683), with the main constructions being undertaken during the 6th and 7th and until the mid-8th century.

Several related Bodhisattva heads have been attributed to Longmen in Longmen liusan diaoxiang ji / Lost Statues of Longmen Cave, Shanghai, 1993, pl. 63, in the Victoria & Albert Museum, London; pl. 71, in a private collection; pl. 72, in the Los Angeles County Museum of Art; pl. 73, in a Japanese private collection; and pl. 75, a standing Bodhisattva in the Shanghai Museum with a similar head; another Longmen head in the Miho Museum is illustrated in Longmen shiku/Longmen Caves, n.p., 2001, pl. 46.

From this highly important cave complex the style spread also to other regions. An over lifesize sculpture of Avalokitesvara from Shaanxi province in the University of Pennsylvania Museum of Archaeology and Anthropology, Philadelphia, dated in accordance with AD 706, with a head probably of similar size as the present one, is illustrated in Saburō Matsubara, Chūgoku Bukkyō chōkuku shiron/The Path of Chinese Buddhist Sculpture, Tokyo, 1995, vol. III, pl. 648. A standing Bodhisattva with related hair style from the Grenville Winthrop collection and a head in the Cleveland Museum of Art, both also attributed to Shaanxi province, are illustrated in Osvald Sirén, Chinese Sculpture from the Fifth to the Fourteenth Century (London, 1925), Bangkok, 1998, vol. II, pls 372 B and 376 C; and a seated Guanyin figure with similar head in the Shanxi Museum, Taiyuan, attributed to the first half of the 8th century, is published in Matsubara, op. cit., pl. 691. A related head from the collection of H. Hardt was included in the Ausstellung chinesischer Kunst, Preußische Akademie der Künste, Berlin, 1929, cat. no. 298; and another was sold in our London rooms, 13th/14th November 1972, lot 255.