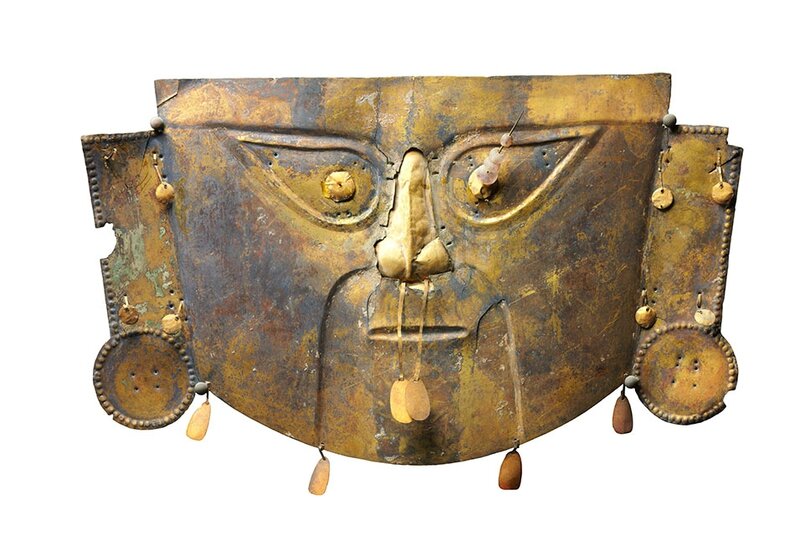 FLORENCE.- At the dawn of the 16th century Europe was shaken by the epoch-making discovery: the ”Indies” – “the world that wasn’t there”. This event completely upset the traditional cultural view based on the Ancient Rome-Greece-Orient axis. According to the anthropologist Claude Lévi-Strauss, the encounter with the new continent “was arguably the most important event in the history of humanity”. The spectacular exhibition on “The world that wasn’t there” and the many, diverse Pre Columbian civilisations that flourished for thousands of years on the American continent are staged in the Museo Archeologico Nazionale, Florence from 19 September 2015 to 6 March 2016. The assembled masterpieces – almost all never previously exhibited – are manifestations of the great civilisations of socalled Mesoamerica (most of Mexico, Guatemala, Belize, and part of Honduras and El Salvador) and the Andes (from Panama to Colombia, Ecuador, Peru and Bolivia and as far as Chile and Argentina). From the Olmecs to the Maya and Aztecs, the cultures of Chavín, Tiahuanaco and Moche, up to the Incas. Moreover, it was a Florentine, Amerigo Vespucci, who first realised that the lands discovered by Christopher Columbus in 1492 were not Indian islands off the coast of Cipango (Japan) or even the greatly sought-after Gates of Eden, but a Mundus Novus, a new continent, which a few years later some geographers working at Saint-Dié-des Vosges called “America” in his honour. And the signori of Florence, the Medici, were the first European rulers to preserve in their collections some of the fascinating, often enigmatic artefacts that had arrived from the “Indies”. They included objects from peoples such as the Taino (the natives encountered by Columbus), which the conquistadors brought back to Europe. Albert Dürer was among the first to consider these objects as works of art. When visiting the Brussels in 1520, he admired Montezuma’s gifts to Cortés: “wonderful objects more worth seeing than prodigies… In my lifetime I have never seen anything that filled my heart with such joy as these things.” Promoted by the Ligabue Study and Research Centre, Venice, and the Soprintendenza per i Beni Archeologici della Toscana-Museo Archeologico Nazionale, and principally sponsored by Ligabue SpA under the patronage of the Regione Toscana and the Comune di Firenze, the exhibition displays exceptional unique items once in the Medici Collections together with precious objects from the Musée du quai Branly, Paris, and major international collections. The core of the exhibition is a vast selection of works from ancient American cultures – never previously shown – from the Ligabue collection. Only a few months after his death, this exhibition is a homage to Giancarlo Ligabue (1931- 2015) by his son Inti, who continues the commitment to cultural and scientific research and popularisation through the Study Centre founded forty years ago by his father, a palaeontologist, scholar of archaeology and anthropology, explorer, enlightened entrepreneur and passionate collector. In addition to having organised over 120 expeditions on all the continents and having personally taken part in excavations and explorations that yielded memorable finds (now in museum collections worldwide), Giancarlo Ligabue assembled an important collection of art objects from very many cultures. A part of this collection is the heart of the exhibition, curated by Jacques Blazy, a specialist in Pre-Hispanic arts in Mesoamerica and South America, with a scientific committee including André Delpuech, Chief Keeper of the Heritage and Head of the Americas Collections at the Musée quai Branly, and the Peruvian archaeologist Federico Kauffmann Doig. The extraordinary exhibition of over 230 works of arts enables visitors to explore the societies, myths, deities, games, writing and craft and artistic skills of these peoples. Among the highlights are several stone masks from Teotihucan, the largest city of Mesoamerica, and some very precious Maya pottery from the Classic period, whose decorations and inscriptions are invaluable sources of information about Maya civilisation and writing. The fascinating journey to the heart of Mesoamerican civilisations begins with items from the Tlatilco and Olmec cultures (c. 1200-400 BC), with exemplar of hollow ceramic anthropomorphic figurines found in necropolises, mainly depicting female figures with a striking cranial deformation, elaborate headdress and barely outlined body. These works exercised a great fascination over painters such as Diego Rivera, his wife Frida Kahlo and several Surrealists. The Olmec culture spread throughout Mesoamerica as far as Costa Rica, including the region of Guerrero (Xochipala), celebrated for its realistically modelled figurines of female nudes, ballgame players, couples or dancers and its stone sculpture production in general (500 BC-AD 500), which was to develop into the so-called Mezcala sculpture.

This enigmatic simple art of mysterious origins had a great influence over André Breton, Paul Éluard and the sculptor Henry Moore, who all became collectors of the stone figurines. From 300 BC to AD 250, the Occidente (West Mexico) is characterised by shaft tombs constructed beneath dwellings. The quite exceptional funerary goods in the tombs – consisting of ceramics in the form of crabs, dogs, armadillos and toads – provide vital information about daily life and religion. Among the various cultures associated with this region is the Chupicuaro culture (its apogee was around AD 400-100), well-known for its hollow polychrome ceramic figurines. A considerable number of these figurines are on show, such as the Large Venus with her hands joined on her abdomen, a deformed head and wide-open almond-shaped eyes, once owned by Guy Joussemet and now in the Ligabue Collection. Next is Teotihuacan: the first real city in central Mexico, literally “the birthplace of the gods”, where emblematic buildings were constructed, such as the Pyramids of the Sun and the Moon and the Pyramid of the Feathered Serpent. The Teotihuacan stone carvers were celebrated for the legendary skill. Their art is highly stylised, even geometric, and produced monumental works as well as the famous, unusual Teotihuacan masks. Conceived according to a standard model with the face in the form of an upside-down triangle, a wide forehead and nose, and thick lips and accentuated eyebrows, the exemplars on show (including some from the former collections of André Breton and Paul Matisse) may have been used as funerary masks. One of them, a mask made of green onyx, now in the Museo degli Argenti, came from the Medici Collection and is a truly striking example of that production. Two awls made of jaguar bone are particularly interesting in terms of the technical skills required for their copious decoration, rich in information. The jaguar was an emblematic animal in the Mesoamerican world, associated with the highest political and sacred functions. From Michoacan, but with an iconography typical of Teotihuacan, with glyphs and images of feline heads and flames, the two instruments were probably for ritual purposes, used in self-sacrifice or practices involving piercing the flesh; one of them has an image of the divine addressee who was offered blood by a “penitent”. The Zapotec culture spread in central Mexico and the region of Oaxaca from 500 BC to AD 700 from the city of Monte Albán. Phase II of this culture (200 BC-AD 200) is characterised by famous funerary urns, also on show in the exhibition. Found in burials, they are often anthropomorphic effigies depicting seated figures with crossed legs and hands on knees, probably Cocijo, the Zapotec god of rain, thunder and lightning; their function has still not been explained. The exhibition also includes some strikingly realistic ceramic figurines, decorated with bitumen after firing, from the Classic culture of the Gulf coast (or Veracruz culture) as well as replicas of stone accessories for the ceremonial ballgame and statues representing smiling or laughing human figures. They are truly exceptional in Mesoamerican art, in which the human figures are usually impersonal or inexpressive. 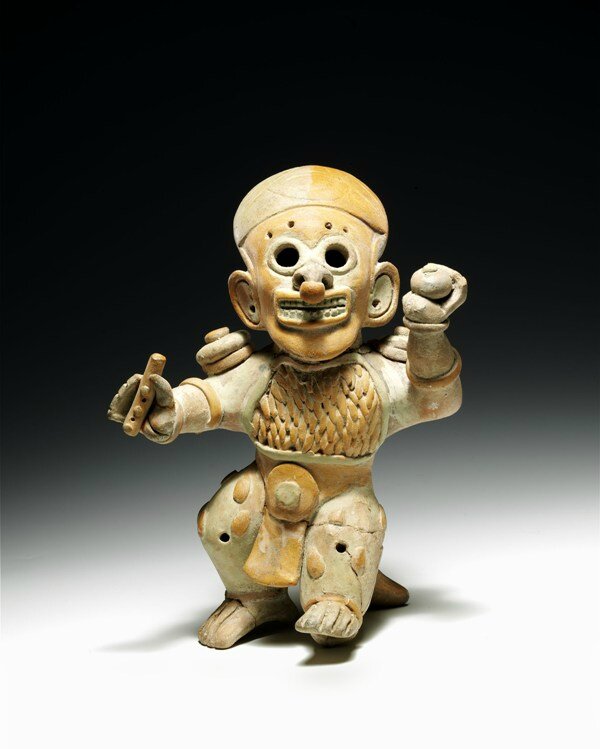 We are introduced to Maya culture and society by priests, deities and domestic animals (such as turkeys), and nobles dressed in richly adorned clothes and stunning jewellery, depicted on plates, sculptures or stelae (a spectacular Maya jade necklace is on show). The particularly beautiful and lavishly decorated Maya pottery from the Classic period provides information about the society and the writing system. The Maya pottery in the exhibition features underworld deities, ballgame players, deer-nobles or vulture-nobles, the celestial dragon, the god K’awiil and young nobles wearing feathered headdresses. 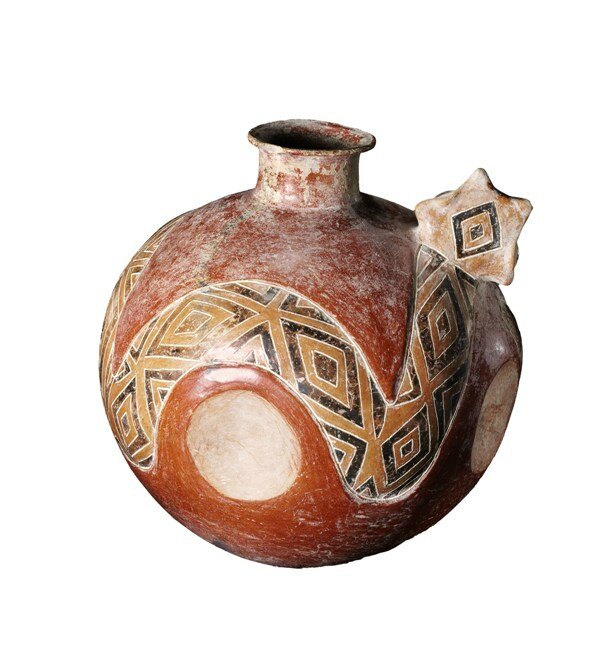 The inclusion in the exhibition of Aztec atlatls (dart- or spear-throwers) is also particularly significant. Once in the Medici Cabinet of Wonders and now in the Museo di Antropologia, Florence, these exemplars are among the few surviving instruments of this kind decorated with gold. The journey continues with objects and art works from South America: from the spectacular production of the first ceramics, such as the Ecuadorian Venuses of Valdivia or Inca objects and items from the world of ancient Chavin, Nazca textiles and vases, and the fascinating Moche culture. But it was gold – such as the gold of the Tairona (either pure or a copper alloy called tumbaga) – that attracted the Spanish and other adventurers to the Andes in search of El Dorado, one of the great myths and a driving force in the Conquest. America had amazed and fascinated Europe on account of its “strange” natives, its very different natural world and it marvellous art works, albeit soon only valued in terms of the tons of gold and silver that the galleons brought back to Europe. And while in Florence the Medici preserved items from the “world that wasn’t there” – the masterpieces on show include a Taino necklace (AD 1500-1600) – the Spanish melted everything made of precious metal to be used as coins.

Only a few decades after Columbus’s discovery (none of the objects he brought back has survived), the Aztec and Inca cultures were annihilated by weapons and slavery, while the Taino were wiped out: according to the historians, by 1530 there was not a single living Taino. Millions of Amerindians also died because of diseases that came from the Old World. It took almost four centuries before Europe began to realise again the extent of the grandeur of the art of ancient America and even today many aspects of the Pre-Columbian cultures are still enigmatic, as is that part of humanity suddenly glimpsed on the horizon by navigators searching for the Indies in October 1492. 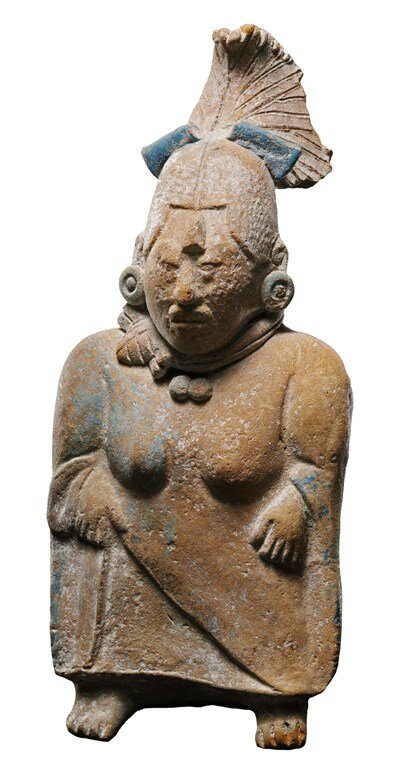