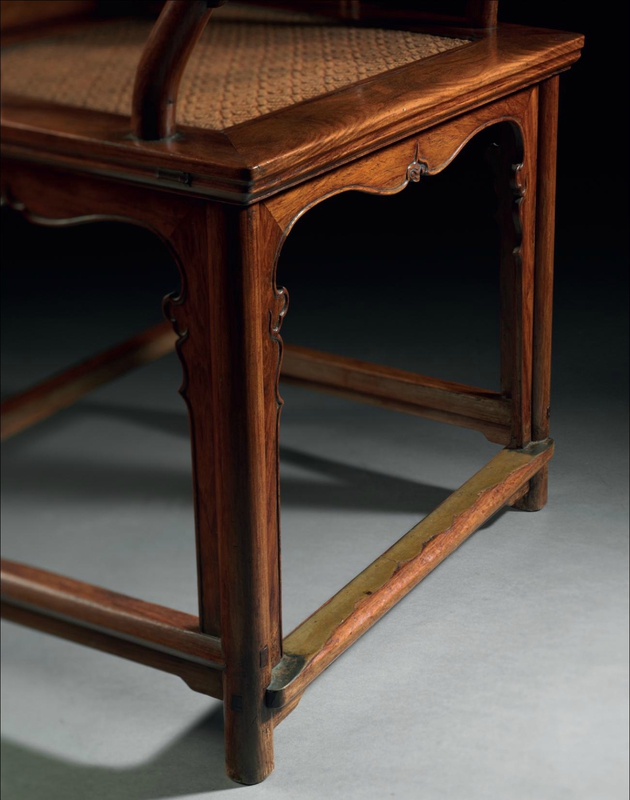 Of grand proportions, each chair has a well-carved, curved, protruding crestrail supported on a broad S-shaped splat and elegantly curved rear posts which continue to form the rear legs. The attractively grained, matched splats are cut from the same section of wood. The curved arm rails are supported on tapered, curved vertical stiles and extend beyond the curved front posts. The molded rectangular frame encloses a mat seat, all above beaded and shaped aprons and spandrels. The legs are of rounded square section and are joined by stepped stretchers and a foot rest above plain aprons. The joints are reinforced with huangtong hardware. Two of the four chairs have huangtong footrest covers.

PROPERTY FROM THE COLLECTION OF ARCH. IGNAZIO VOK

Note: Originally commissioned as a set of four, the present chairs were at some point split into two pairs and later reunited by the present collector in 2000. See Rose Kerr, 'Four High Yoke-back Armchairs Reunited as a Set', Orientations, December 2000, p. 81. In the article, Kerr suggests that the extraordinary height of the present chairs and their elegant form suggest a formal use and a display function, and that they would have only been offered to guests of honor. The chairs would have conveyed a sense of dignity and power on any sitter.

The present set of four chairs displays an unparalleled grace and finesse seen only in the finest furniture dated to the Ming dynasty. Several features distinguish this magnificent set: the grand proportions, the graceful curve of the crest rail, the exceptionally well-carved sweeping hook handles, and the beautifully figured S-form backsplat. The curved, matched backsplats have the same beautifully figured grain and confirm that all four splats were cut from the same section of timber. The large sections of huanghuali required to achieve the dramatic curves of the arms and crest rails would have resulted in a significant amount of wastage, and suggests the enormous financial resources of the gentleman who commissioned the set. The confident carving of the outswept hook handles and the superior quality of the huanghuali suggest that the chairs were constructed by a master craftsman. And the beautifully worked brass metal fittings carefully secured at the joints not only provide structural support but add a touch of flourish to this superb set of chairs. Sets of four chairs are rare and unusual, and, only a few prominent sets have appeared, most notably the exquisite set of four horseshoe-back armchairs from the Robert H. Ellsworth Collection, sold at Christie’s New York, 17 March 2015, lot 41 (fig. 2).