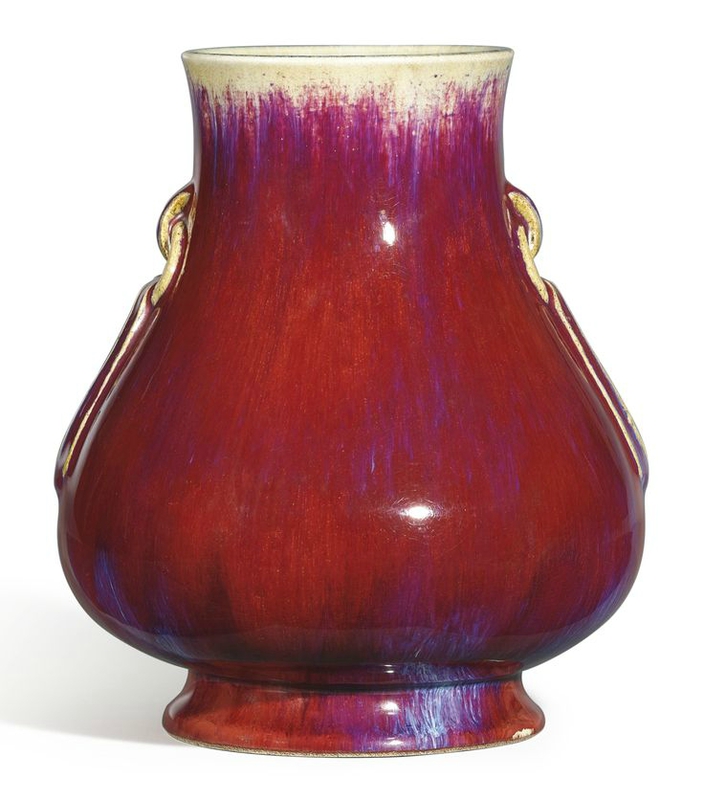 sturdily potted with a full, rounded body supported on a flared foot and rising to a waisted, slightly flaring neck, the shoulders moulded with handles and fixed rings suspending tassels, with a rich glaze of crushed raspberry tone and occasional streaks of lavender applied to the exterior and draining away from the mouthrim and handles to reveal creamy-mushroom tones, the interior covered in a pale blue glaze with beige undertones, the base washed with a transparent light brown glaze with grey patches and incised with a four-character reign mark.

Notes: While at first glance this vase appears to be a familiar type, finely potted in an elegant archaic bronze-inspired pear-shaped body and covered by a striking glaze in imitation of the celebrated Jun wares, it is unusual for the ringed loop handles from which tassels are suspended. Only one other closely related vase appears to have been published, from the Qing court collection and still in Beijing, illustrated in The Complete Collection of Treasures of the Palace Museum. Monochrome Porcelain, Hong Kong, 1999, pl. 181. Yongzheng mark and period vases of this form are also known modelled with tubular handles, such as one sold in these rooms, 15th May 1990, lot 75.

A great connoisseur of antique porcelains and with a discerning aesthetic sense for works of art, the Yongzheng Emperor demanded the highest level of craftsmanship in the production of elegant implements for personal use. Various attempts to recreate the Jun glaze had failed in the early years of his reign with the emperor’s great disappointment, until Nian Xiyao, the supervisor of the Imperial kilns, sought a new recipe amongst the elderly craftsmen in Junzhou, Henan province, where it is believed the Jun glaze originated. According to Palace records, on the 8th year of the Yongzheng reign, corresponding to 1730, the Emperor responded positively for the first time to a group of imitation Jun wares and remarked ‘This group is very good. Tell Nian Xiyao to make a few more’ (translated in The Tsui Museum of Art. Chinese Ceramics IV. Qing Dynasty, Hong Kong, 1991, p. 48). Recent studies on flambé glaze has revealed that this new recipe required the application of a layer of copper blue glaze with traces of lead, over a layer of red glaze, which when fired created the striking streaks so admired by the Qing Emperor.