A Mughal carved jade dagger hilt in the form of a camel head, 17th century

A Mughal carved jade dagger hilt in the form of a camel head, 17th century 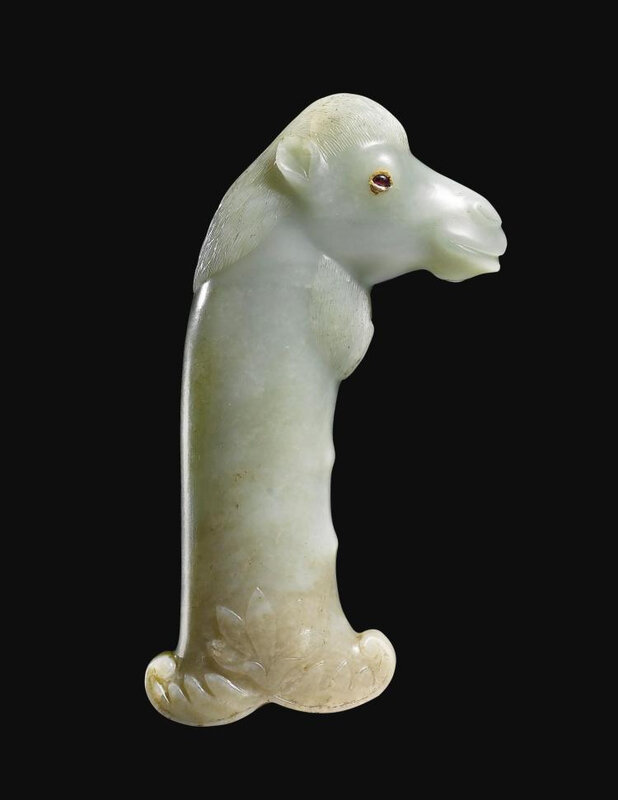 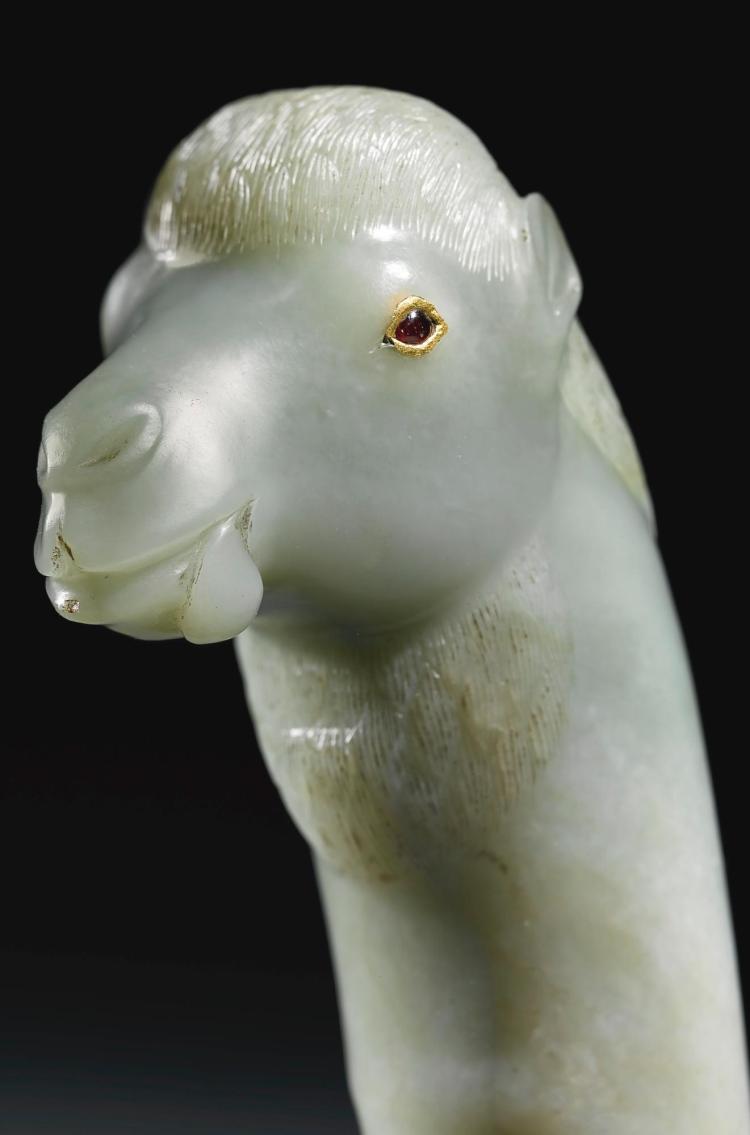 the jade carved in the form of a camel's head with protruding dulla, red gem-set eyes with gold outlines, finely carved hairlines, finger grips in the form of two ridges on the concave edge, the guard carved as a palmette with lily and acanthus, wooden stand.

Note: Daggers with jade animal hilts were reserved for individuals of the highest rank and status at the Mughal court. The present example pays eloquent tribute to a culture that gave primacy to technical excellence and empirical observation. Expressive in its subject-matter and refined in its execution, this sculptural tour de force captures the essence of royal taste and high fashion in seventeenth-century India.

The Indian tradition of working blocks of hardstone into beautiful, elegant and functional objects dates back to pre-Islamic times. During the Roman period Cambay in western India was a centre for exporting agate vessels and other hardstone artefacts to the West. The use of jade however only became evident during the Mughal period, reaching its artistic zenith during the seventeenth century under the patronage of the Mughal emperors Jahangir (r.1605-27) and Shah Jahan (r.1628-57). The Mughal court chronicler and historian Abu'l Fazl records that Jahangir’s father, the emperor Akbar (r.1556-1605), received a merchant at court by the name of Khwaja Mu'in who had the right to the jade stores in the bed of the river Kashgar. Nephrite jade was primarily found in the rivers of the Kunlun Mountains near Khotan and Kashgar in China's Xinjiang province, an area that came under Timurid control in the late-fourteenth century.

The emperor Jahangir (r.1605-27), who was keen to emulate his Timurid ancestors, owned several Timurid artefacts including a number of antique jade vessels that formed part of his personal collection. Jahangir had some of these prized vessels engraved with his signature, including a jug in the British Museum dated 1624 and a white nephrite jade jug in the Fundaçāo Calouste Gulbenkian, Lisbon, (inv. no.328) inscribed to the fifteenth-century ruler of Samarqand, Ulugh Beg, with subsequent inscriptions recording its possession by Jahangir (1613) and Shah Jahan (1646) (see London 1976-III, p.129, no.114).

The Mughal emperors not only coveted antique jades but also commissioned them from their own private workshops for personal use. William Hawkins, an English merchant who was invited to Jahangir's court, lists the presence of a large amount of uncut stone, including 55lb of uncut jade, and goes on to give an account of the carved jades and other treasures he encountered: 'drinking cuppes five hundred, but fiftie very rich, that is to say, made of one piece of ballace ruby [spinel], and also of emerods [emeralds], of eshim [yashm: Persian for jade]... and of other sorts of stones' (Stronge 1993-4, p.7).

Seventeenth-century Mughal jades, once carved and polished into shape, were typically inlaid with kundan gold and set with gems or hardstones, in the manner seen on the present dagger-hilt. This tradition is recorded by the contemporary traveller, Jean de Thevenot, who describes gold and gem inlaying at Agra (see Guha 1979). The French physician François Bernier mentions jade cups inlaid with gold and set with stones in a letter written in 1665: 'The jade stone presented upon this occasion was of an extraordinary size and therefore very precious. Jachen (yashm) is in great estimation in the court of theMogol: its colour is greenish, with white veins, and it is so hard as to wrought only with diamond powder. Cups and vases are made of this stone. I have some of most exquisite workmanship, inlaid with strings of gold and enriched with precious stones.' (Constable 1891, pp.422-3).

The kundan technique employed for the settings is unique to India. Using hyper-purified gold (kundan), the inlayer (zar-nishan) refines the soft metal into strips of malleable foil which at room temperature have a tacky or adhesive quality. Once cut and folded, the craftsman can apply the ductile gold as he chooses (in this case as a ground for the gemstone eyes) without any need for solder or glue. In spite of the practical advantages of this technique, it was only ever used in the Subcontinent, though widely imitated elsewhere (see Keene 2001, pp.18 and 30).

Amongst the most personal objects in the possession of a Mughal prince or courtier was his 'parade' or 'dress' dagger. By Jahangir’s reign, edged weapons were no longer used exclusively for warfare: they had become great works of art in their own right, being decorated with enamels, precious metals and stones. Mughal princes, nobles and high officials were honoured regularly by the emperor with jewelled daggers, which were worn like luxury Swiss watches are worn today, as symbols of the wearer's status and wealth. These accoutrements were both private possessions and public statements: sported by an individual, to be seen, judged and admired by all.  Stuart Cary Welch's close study of courtly figures in the Windsor Castle Padshanama reveals that the small number of daggers with animal hilts were reserved for the use of princes, such as Dara Shikoh and Shah Shuja (folio 116b; see fig.1), as well as a few senior dignitaries (folio 71; see fig.2). Whilst the number of daggers with animal hilts increased during the late-seventeenth and eighteenth centuries, these continued to function as indicators of the highest rank and position at court (see Welch 1985, pp.257-8).

The Mughal fashion for animal motifs is a direct reflection of the personal tastes of the rulers. Both Jahangir and Shah Jahan, like their forebear Babur (r.1526-1530) the founder of the dynasty, had an acute sensitivity towards nature and encouraged their artists to record all aspects of the natural world in precise detail through first-hand study. In his memoirs Jahangir refers repeatedly to indigenous birds, plants and animals, reflecting upon their habits, habitat and appearance.

The naturalistic component of Mughal art finds glorious expression in jade dagger handles. Robert Skelton writing in the V&A catalogue The Indian Heritage: Court Life and Arts under Mughal Rule of 1982, where this piece was exhibited, says: 'Naturalistically carved animal heads, more usually of horses or wild goats, were favourite subjects of weapon hilts at this time.' The present head is a rare example of a camel, acutely observed from life, even down to the incorporation of one curious physiological feature which identifies this specimen unequivocally as a male of the species. Jonathan Barrett writes: 'In pursuit of females in season, the male camel inflates a sac (known as a dulla) in his upper palette. This protrudes from one side of his mouth, and is accompanied by a frothy spume of saliva. For some inexplicable reason females find this attractive. The dulla is frequently mistaken for the camel's tongue by those who are ignorant about camelid physiology; female camels however are not susceptible to this error.' (Hales 2013, p.28, no.69).

The Gahlin jade camel head is remarkable for the high quality of its carving, marking it out as an 'early' example from the peak of Mughal artistic production in the early/mid-seventeenth century. Even the smallest details such as the groomed, wavy locks of the animal's mane are treated with great sensitivity whilst the powerfully expressive features of the face invite comparison with the great contemporary animal artist Mansur whose vivid portraits of animals and birds earned him the sobriquet Nadir al-'Asr, 'Wonder of the Age.'