LOS ANGELES, CA.- “Almost every rock, every promontory, every river, is haunted by the shadows of the mighty dead,” wrote the English antiquarian Edward Dodwell of his travels in Greece at the beginning of the nineteenth century. During this time, he and the Italian artist Simone Pomardi traversed the country, producing around one thousand watercolors and drawings of the ancient Greek countryside.

On view at the Getty Villa October 21, 2015 – February 15, 2016, Greece’s Enchanted Landscapes: Watercolors by Edwa rd Dodwell and Simone Pomardi presents, for the first time in the United States, a selection of 44 magnificent illustrations from the expansive archive acquired by the Packard Humanities Institute, as well as four photographs from the Getty Museum’s photographs collection and six prints from the collection of the Getty Research Institute. They depict picturesque landscapes infused with memories of the classical past, often in striking juxtaposition with the realities of Greek life under Ottoman rule. The exhibition culminates in a series of monumental panoramas of Athens, each over thirteen-feetlong, that are both sweeping in scope and rich in scrupulous detail. “These captivating drawings represent one of the most beautiful and compelling manifestations of Europe’s fascination with modern and ancient Greece—its landscape, archaeological sites and social customs—in the years before its independence from Ottoman rule,” says Timothy Potts, director of the J. Paul Getty Museum. “Displaying them at the Getty Villa, alongside our unparalleled collections of Greek, Roman, and Etruscan art, will allow visitors to experience these unique images in a particularly appropriate setting.” 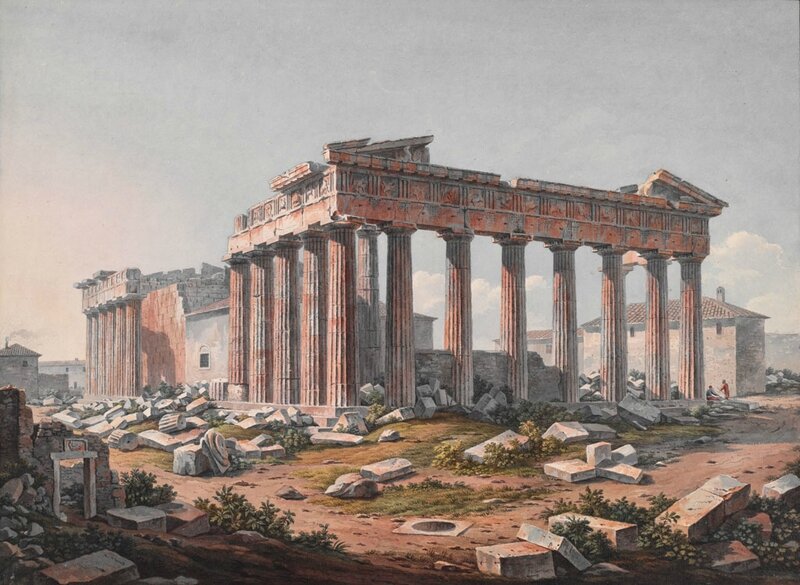 Potts adds: “We are particularly grateful to David Packard and the Packard Humanities Institute, not only for their generosity in supporting this exhibition, but for the decades of work they have done in researching, preserving, and publishing this extraordinary body of work that serves as an important record of Greece’s ancient past.” Removal of Sculptures from the Parthenon by Lord Elgin’s Men, after 1801, Edward Dodwell and/or Simone Pomardi; watercolor. The Packard Humanities Institute.

Edward Dodwell (1777/78 – 1832) was one of an increasing number of travelers in the nineteenth century who combined Hellenism—an erudite passion for the legacy of Greek antiquity—with documentary intent. He first traveled through Greece in 1801, and then returned in 1805 with the Italian artist Simone Pomardi (1757-1830). They toured the country for fourteen months, drawing and documenting the landscape in all its aspects. Dodwell described the objective of his travels in Greece as “to leave nothing unnoticed,” and the illustrations—many never published—are a valuable record of the country and its monuments in the years at the beginning of the nineteenth century. 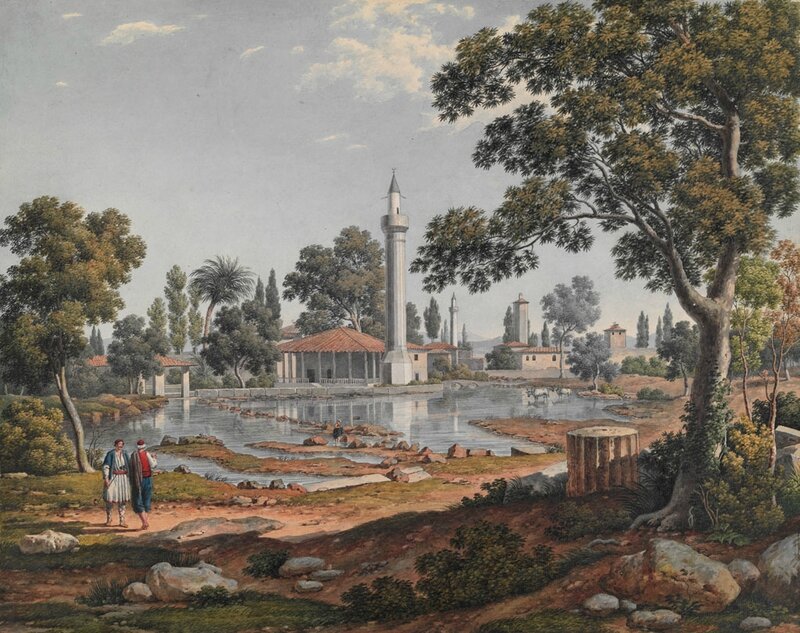 “The sight of ancient temples lying in ruin, or of the Greek people under Turkish rule, contrasted poignantly with nostalgic imaginings of the classical past. Yet for Dodwell and Pomardi, such juxtapositions only magnified the lost splendor of Greek antiquity,” says David Saunders, curator of the exhibition. Village of Portaria on the Slopes of Mount Pelion, after 1805, Simone Pomardi; watercolor. The Packard Humanities Institute

For many of their illustrations, the artists made extensive use of the camera obscura, an optical device that Dodwell described as “that infallible medium of truth and accuracy.” This is most fully apparent with the panoramas of Athens. Combining expansive vistas and topographical exactitude on a grand scale, the four monumental illustrations in this exhibition are the most complete expression of Dodwell and Pomardi’s project to document Greece, and capture what Dodwell referred to as “the delights of the present, and recollections of the past.” Also, included in the exhibition is a portable tent camera obs c ura from the Getty’s collection. Dodwell and Pomardi would have used a similar camera obs c ura during their travels. Finished Watercolor of the Temple of Aphaia at Aegina from the Southeast, after 1805, Simone Pomardi; watercolor. The Packard Humanities Institute. View of the Parthenon from the Propylaea, Athens, 1805, Simone Pomardi; sepia. The Packard Humanities Institute. 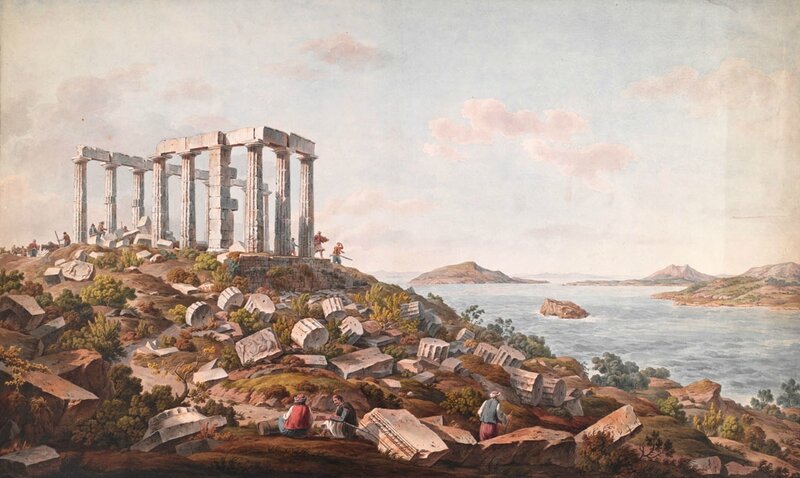