Exhibition at the Belvedere focuses on the women of Klimt, Schiele and Kokoschka

Exhibition at the Belvedere focuses on the women of Klimt, Schiele and Kokoschka VIENNA.- The beginning of the twentieth century saw wide-reaching social and economic changes, not least of which was a rethinking of traditional gender roles. The incipient move toward gender parity provoked vehement counter-arguments on the part of popular theorists such as Otto Weininger. Yet the sexual liberation served men as well as women; both had reason to break out of nineteenth-century moral constraints. The more forthright acknowledgment of male and female sexual desire sent thrills and chills through early twentieth-century Austrian art, infusing the work of the nation’s leading artists with a mix of terror and exhilaration. Gustav Klimt, Egon Schiele and Oskar Kokoschka each approached what was then known as the Frauenfrage – the woman question – in different, yet overlapping, ways. The Women of Klimt, Schiele and Kokoschka explores their differences and similarities and in the process offers new insights into early twentieth-century gender relations and the origins of modern sexual identity. Jane Kallir organized the exhibition along four main themes: portraiture, couples, mothers and children, and nudes.

In the words of Agnes Husslein-Arco, the director of the Belvedere and the 21er Haus: “The Women of Klimt, Schiele and Kokoschka sheds light on both sides of Vienna society, as well as those outside the salon culture of the upper classes. More and more middle-class women raised their voices in opposition, and, together with women workers, organized themselves into a movement. They not only wanted to rethink male dominated upbringing, the purely representative function of wives and society’s empty conventions; they demanded rights and insisted that gender roles be reconsidered and arranged anew.”

It is easy to understand why Klimt’s portraits – sumptuous, elegant and brilliantly colored – were popular with the women of Vienna’s high society. But the artist’s richly ornamented surfaces almost completely obscure the sitters’ personalities. Schiele and Kokoschka turned this decorative formula inside out, thrusting their subjects into a pictorial void. In the process, they forced a confrontation with the existential anxiety that had been concealed by Klimt’s horror vacui. Defying the then-prevalent contention that women lack souls, Schiele and Kokoschka forged a new, modern form of psychological portraiture.

“It was in this Zeitgeist,” notes the curator and vice director of the Belvedere, Alfred Weidinger, “that Klimt’s character as a person and artist was forged.” “Klimt,” explains Weidinger, “moved amid these spheres, and his art was chiefly in response to widely held discussions about the ‘riddle that is woman’, discussions that by 1900 or so had become the focal point of his artistic output. From then on, his art concentrated entirely on the female sex, approaching it from a variety of ways.”

“Intellectuals in fin-de-siècle Vienna were downright obsessed with female sexuality,” writes the New York gallery owner and curator Jane Kallir in describing the era’s social and political framework. “This obsession,” she continues, “was reflected in the work of personalities as varied as Sigmund Freud and Gustav Klimt, Otto Weininger and Oskar Kokoschka, Arthur Schnitzler and Egon Schiele. But it was Schiele’s representations of women that were considered especially offensive.”

The mother and child, one of the oldest subjects in Western religious art, was likewise transformed by the pressures of fin-de-siècle sexual politics. In the popular imagination, females were categorized either as “Madonnas” (chaste and maternal) or “whores” (sexually voracious predators). Klimt and Schiele subverted this dichotomy by depicting pregnant nudes and naked mothers, thereby explicitly linking motherhood to female sexuality. Kokoschka, on the other hand, seemed really to imagine that maternity “cured” a woman of sexual promiscuity. He obsessed about fathering a child with his lover, Alma Mahler, and in his art repeatedly allegorized her as the Virgin Mary.

Traditionally, the goal of the female nude in Western art has been to control and subdue the subject’s innate eroticism through a process of ordering and idealization. At the beginning of the twentiest century, men’s fear of female sexuality was expressed in the concept of the femme fatale, one of Klimt’s recurring subjects. While these brazen, provocative women were controversial in their day, overall there is little in the artist’s work to upset the primacy of the male gaze. Klimt’s nudes are seductively beautiful, and in many of his most explicit erotic drawings they are passive almost to the point of unconsciousness.

By comparison, Schiele’s and Kokoschka’s nudes are far more abrasive. Angular lines subvert their inviting curves, and erratic cropping creates an aura of unease. Unlike classical nudes, these women often seem aware that they are being watched, and at times they appear none too pleased. Schiele’s and Kokoschka’s nudes, like Klimt’s, convey an undercurrent of fear. It would not be accurate to call any of these artists feminists. Nevertheless, all three acknowledged female sexual autonomy to a degree that was unprecedented at the time.

In the work of turn-of-the-century artists and writers – Adolf Loos or Peter Altenberg, say – one finds a kind of elitist and sexist detachment, a permissiveness of deviance, up to and including paedophilia. Schiele was slapped with his first obscenity charge in 1910, after fourteen of his drawings had been removed from an exhibition in Prague. In 1912 he was arrested for crimes involving moral turpitude. Many painters drew on nude photography and literary precursors for inspiration. For his drawings of nude women masturbating, Klimt took an important cue from shunga, Japanese woodblock prints with explicitly sexual motifs that emerged around 1820 and whose contents were sometimes so graphic that their circulation was forbidden. What is striking about Klimt’s works is less their nudity than their enlarged and skillfully detailed representations of the vulva.

The Women of Gustav Klimt
Alongside Egon Schiele and Oskar Kokoschka, Gustav Klimt was among the most important erotic painters of his era. His decorative works hung in many houses on Vienna’s Ringstraße and in stately buildings throughout the Austro-Hungarian Empire, making him the heir apparent to the eminent painter Hans Makart. But as he completed a commission for a series of ceiling paintings at the University of Vienna, he surpasses his earlier achievements. The female subjects in these works have an immense physical and psychological presence. From this commission onwards, women would be the main subject of Klimt’s art.

In view of the subject, it is not surprising that Klimt spent most of his life among women. He never married and never shared a flat with a girlfriend, but he lived together with his sisters Klara and Hermine in the apartment of his mother, Anna. During the day, he spent time in his atelier, where he was constantly surrounded by women – sitters for his portraits and young women who posed for nude drawings. This experience helped Klimt understand and respond to intimate themes from the life of women.

The Women of Egon Schiele
Schiele was slapped with his first obscenity charge in 1910, after fourteen of his drawings had been removed from an exhibition in Prague. In 1912 he was arrested for crimes involving moral turpitude; in the years that followed Kokoschka repeatedly accused him of being a pornographer. When Schiele completed the painting that would secure his breakthrough, he was barely twenty, a youth whose artistic abilities far exceeded his emotional development. The hallmarks of his works – the preoccupation with metaphysical questions and with sex – are typical themes of late adolescence. Throughout his early twenties, these matters tormented him. As he grew older, however, he became more detached. Those who see Schiele’s interests as abnormal overlook how young and artistically precocious he was. This made it possible for him to express feelings that older artists usually repress.

What distinguishes Schiele from Klimt, however, is that his representations are not mere projections of male desire. At the root of his work is an interaction between the artist and the model, an exploration and questioning of the mysteries of sexual attraction and aversion. One can hardly call Schiele a feminist, but very few artists before and after him have so openly bestowed sexual autonomy on their female subjects. With an intentional disregard for the aesthetic means traditionally used to reduce and objectify the force of female nudes, he unleashed the power of the female other and cast doubt on the effectiveness of rational male control. Still today, Schiele’s expressionist nudes contain something threatening for some heterosexual men.

Unlike Klimt, who always kept his lovers at a distance, even when they were the mothers of his children, Schiele overstepped the tacitly acknowledged boundaries of his private sphere – his studio – by openly professing his love for his girlfriend, the model Wally Neuzil. Yet because of her low social station, Schiele never saw Wally as a potential wife and decided instead for Edith Harms – a daughter of a master locksmith for the railway – who demanded that Schiele break off contact with his lover. The works he completed around his break-up with Wally and the first months of his marriage suggest how difficult this phase was for him. The idea of an ecstatic union between body and mind that he expressed so clearly in some of his earlier works gave way to the sober realities of human relationships. His experience with marriage gave his portraits more depth and sensitivity.

The art historian Hans Tietze noted that Schiele, ”condensed all his vitality into a single, hastily travelled span of time.” In bridging the period between adolescence and adulthood Schiele’s work finds its completion. 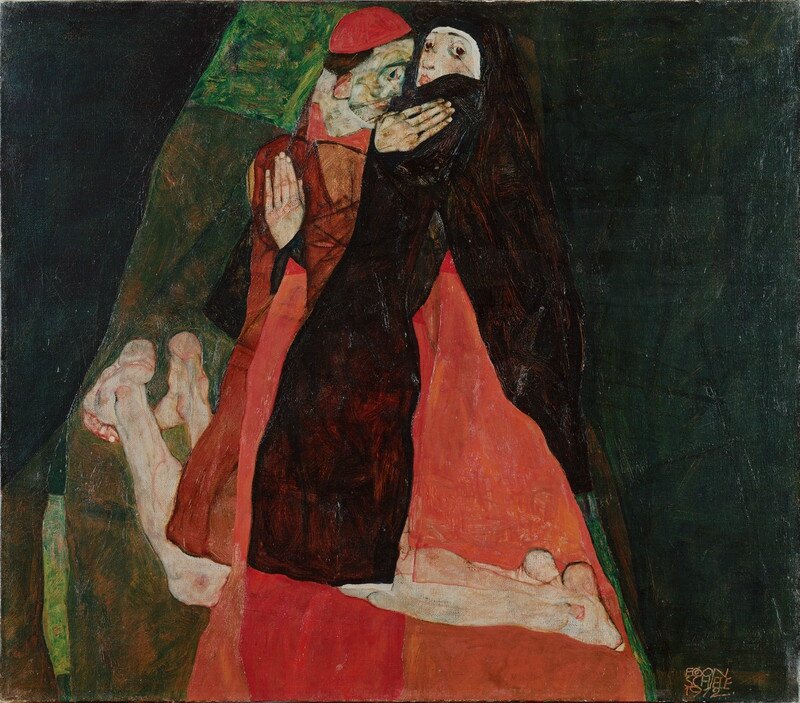 The Women of Oskar Kokoschka
In early twentieth-century Vienna Oskar Kokoschka earned himself the flattering nickname of Oberwildling, the wild one. His work at the Vienna art exhibitions of 1908 and 1909 was hotly debated by the press. His portraits and his plays were controversial; his shaved head seemed radical. Kokoschka’s early artistic work occurred at a time in which alienation between the sexes, already augmented by the corset of bourgeois sexual morality, had reached a high point. It culminated in an atmosphere of uncertainty towards everything sexual. By around 1900, female figures in modern literature were portrayed as man-eating nymphomaniacs, corrupt seductresses and worshipped mistresses. Be it in the form of Judith or Salome, they expressed the male fear of castration.

There is little doubt that Kokoschka’s negative view of woman increased considerably after he failed to win the affections of his classmate Lilith Lang in 1907. Comparison with the successful “activities” of his idol Gustav Klimt was certainly another source of frustration. Kokoschka’s envy of his artistic rival Egon Schiele was palpable in his disdain. Schiele was “constantly surrounded by girls”, which led to his immoral behaviour at the Vienna Academy of Fine Arts. Karl Kraus and Adolf Loos, with whom Kokoschka became friends around 1908/09, were no slouches either when it came to sex. Loos had many affairs, married three times and in 1928 became entangled in a moral scandal. By contrast, the young Kokoschka usually took flight where love was concerned. It is likely that he saw women as dangerous seductresses and male sexual desire as a threat.

Though sexual questions made up only a part of Kokoschka’s multifaceted work and occupied him only temporarily, his idea of women underwent a remarkable transformation. After the failure of his relationship with Alma Mahler, he surmounted his inner conflicts and had a positive experience with Anna Kallin, leaving him more at east around women. Starting in the mid 1920s, other subjects entered his artistic purview – cities and landscape, in particular. In 1941, at the age of fifty-five, Kokoschka married the twenty-six-year-old law student Olda Palkovksá. Commentaires sur Exhibition at the Belvedere focuses on the women of Klimt, Schiele and Kokoschka