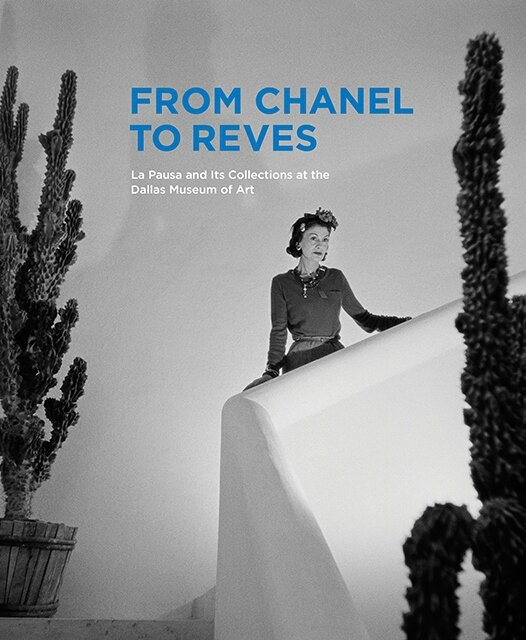 “This book will cast new light on the objects that comprise the collection while allowing us to consider with fresh eyes the house and décor that surrounded them,” stated Meslay. “It is amazing to discover that Chanel has such a strong presence in Dallas and at the DMA.” The entryway to the DMA’s Reves Collection, a replica of the original Villa La Pausa, built by Chanel in 1927. Dallas Museum of Art

Wendy and Emery Reves purchased the Villa La Pausa in 1953 from the fashion icon Gabrielle “Coco” Chanel, and retained the majority of furnishings, souvenirs, and books owned by the acclaimed fashion designer. The Mediterranean villa was originally built in 1927 by Chanel, who directed the design of it with the architect Robert Streitz to reflect aspects of the Aubazine convent in the Corrèze region of central France where she lived as an orphan in her early life. Throughout her time at La Pausa, she decorated and remodeled the home with austere furniture, with the majority of the 16th- and 17th-century pieces most likely coming from the Duke of Westminster’s collection. The Duke was a longtime companion of Chanel’s and spent many years with her at La Pausa.

Along with the furnishings, most of which was collected or commissioned by Chanel, Wendy and Emery Reves acquired Chanel’s personal library, which included numerous novels by contemporary writers of the time and some first editions by her friends, among them Jean Cocteau. A recent discovery from the La Pausa library is a bookplate of Paul Iribe, the famous French fashion illustrator and interior designer, on the last page of Spinoza’s Ethique. Iribe died in 1935 while visiting Chanel at the Mediterranean villa. An installation of the book and bookplate is on view at the DMA in the Emery and Wendy Reves Collection galleries.

In 1985, the Museum received the private art collection of Emery Reves—including impressionist, post-impressionist, and modern paintings, sculptures, and works on paper, and decorative arts objects—donated by the Wendy & Emery Reves Foundation, Inc. on behalf of Wendy’s late husband, Emery. With this gift, the Museum’s collections of late 19th- and early 20th-century European art and European decorative art were transformed. From Chanel to Reves highlights areas of the impressive holdings collected by Wendy and Emery, including perhaps lesser known items such as the large collection of frames; the finest work ever painted by Honoré Daumier, Head of Pasquin; and one of the most remarkable collections of textiles and rugs of its kind, including a number of Spanish Renaissance rugs equaled only by one or two private Spanish collections and that of the Victoria and Albert Museum in London.

Olivier Meslay will lead a gallery talk on Wednesday, December 9, at 12:15 p.m. in the Wendy and Emery Reves Collection galleries. The tour will highlight findings presented in the publication and is included in the Museum’s free general admission.

The color-illustrated 66-page book is published by the Dallas Museum of Art ($15, paperback). It is available for purchase in the DMA Store or online at shopdma.org. 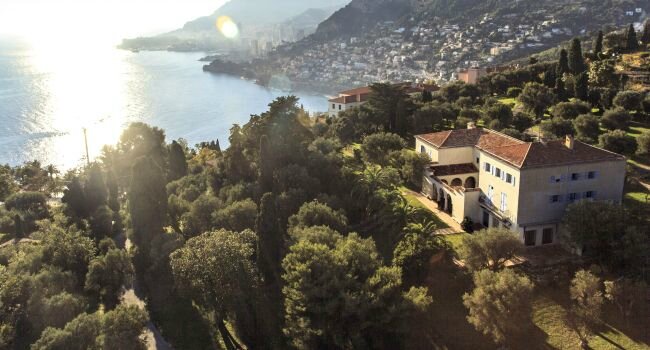 Tucked between Monte Carlo and Menton at the eastern end of the Côte d’Azur, Roquebrune-Cap-Martin — once the private hunting grounds of Monaco’s reigning family — is perhaps the most private. Built in 1928 by the architect Robert Streitz for Coco Chanel and Hugh Grosvenor, the second Duke of Westminster, the sophisticated simplicity of La Pausa reflects Chanel’s active involvement in all stages of the design and creation of the property, which was her French Riviera residence from 1929 to 1953. The design was inspired by the Cistercian convent orphanage where she was raised. The five windows is a reference to Coco Chanel's favorite number. 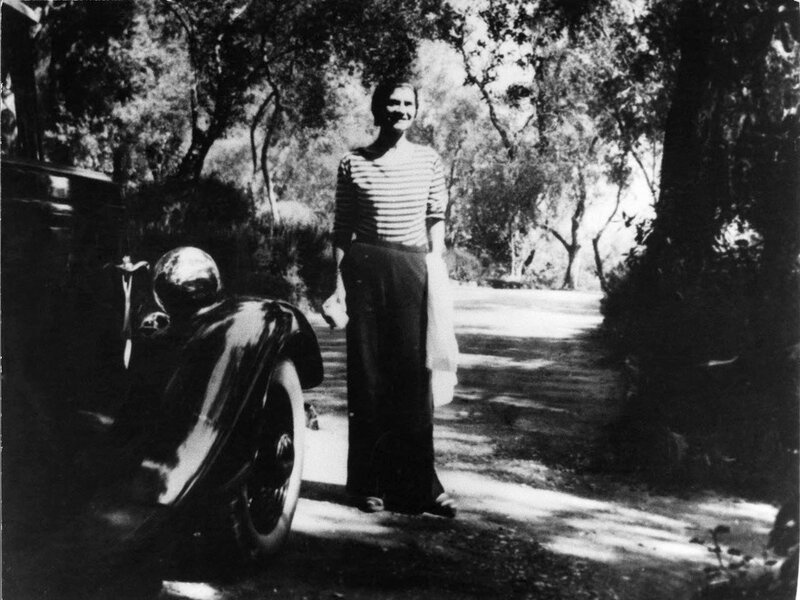 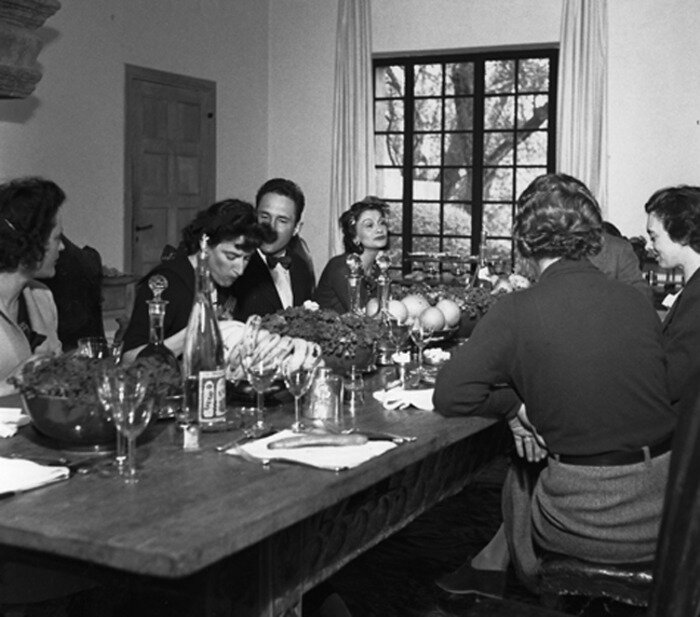 Chanel and her friends in La Pausa. Coco Chanel in bed at La Pausa while visited by her friend Jean Godebski and his sister Mimie Godebska Blacque-Belair. Chanel’s bedroom at La Pausa, with the chandelier now in the Reves entry and the desk at the right, now serving as a buffet table in the Reves Dining Room. This chandelier was originally in Coco Chanel’s bedroom, hanging above her bed. Like most people who move, Mlle Chanel didn’t feel the need to take the light fixtures in her home with her. Wendy Reves, however, decided this could not stay in her new bedroom and moved it to the entryway of her home. This long table was originally used by Coco Chanel as a desk; however, Wendy decided that this could be useful in another way. She unfolded the leaves and moved it into her dining room to act as a buffet table. The other side of Coco’s bedroom features the mirror now in the Reves Bedroom as well as the reclining chair now in the Library. Originally in Mlle Chanel’s bedroom at La Pausa, this mirror didn’t travel far when Wendy and Emery Reves moved. They opted to keep it in their own bedroom. Interestingly, this is the only item that belonged to Coco Chanel that is in the Reves Bedroom. The reclining chair in the Library, shown with the rods pulled out. Possibly one of the coolest furniture items in the Reves Collection, this chair actually reclines using steel rods that come out of the handles. This early version of the recliner was originally in Mlle Chanel’s bedroom. Of the many items in this room that belonged to Coco Chanel, we think that this yellow couch might have originally been covered in a darker fabric and left behind when she sold La Pausa. Wendy liked the color yellow and recovered the couch to fit her tastes. We can see the similarity between them when comparing the side views. Chanel’s Salon at La Pausa, with the same couch seen from the side. Coco’s Great Hall, with the sunburst clock on the wall. Mlle Chanel had a set of two matching clocks, this one, which is now hanging in the Grand Hall, and another that hangs above the fireplace in the Reves Salon. When Wendy and Emery Reves moved in, they enjoyed these gold clocks and kept them in their original locations before donating them to the DMA. 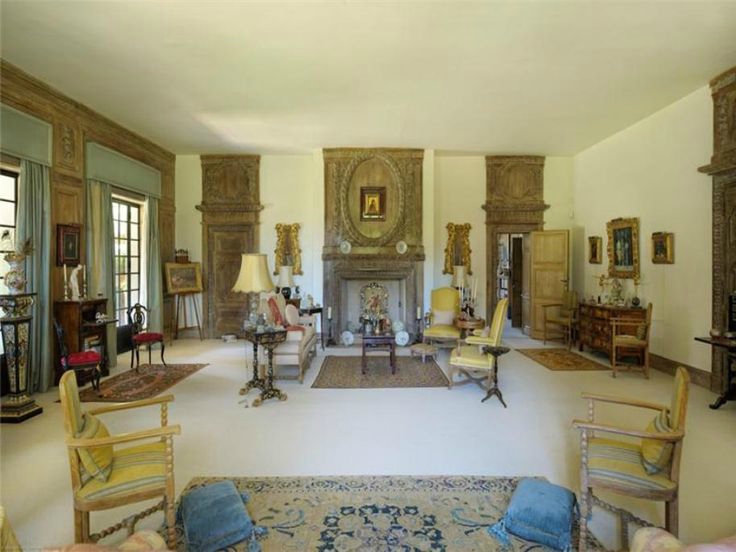 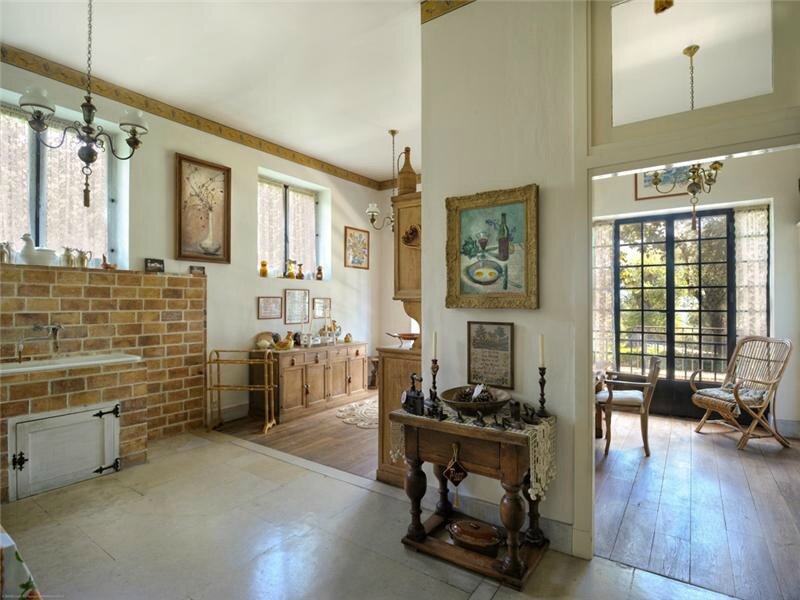 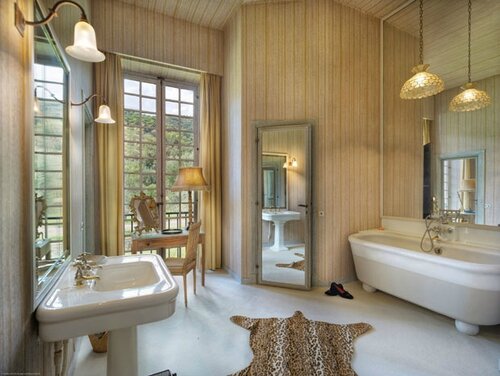 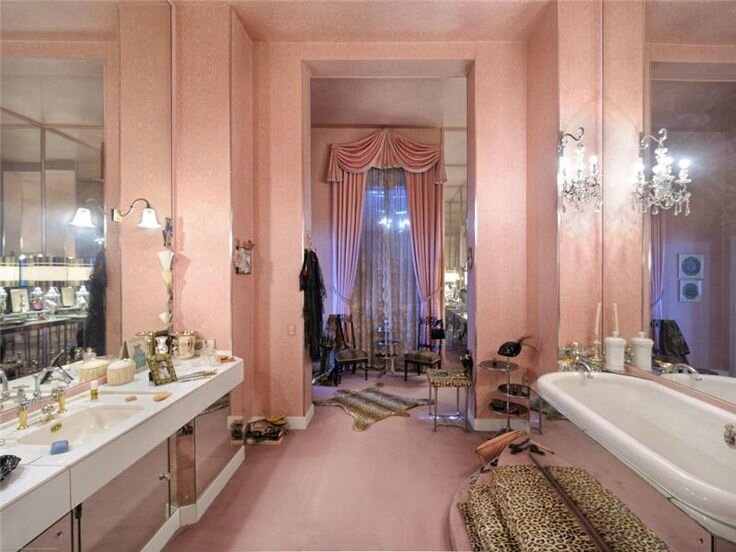