Selfies on paper: Self-portraits from Rembrandt to Willink on view at the Rijksmuseum

Selfies on paper: Self-portraits from Rembrandt to Willink on view at the Rijksmuseum AMSTERDAM.- The Rijksmuseum is exhibiting ninety drawings, prints and photographs spanning a period from the seventeenth century to the twentieth to tell the story of the ‘selfie’ on paper. Virtually every artist in the past looked in a mirror and captured his or her image for posterity – just as we do now. Self-portraits by such artists as Rembrandt, Moses ter Borch, Leendert van der Cooghen, Wouter Johannes van Troostwijk, Käthe Kollwitz, Jan Toorop, Oskar Kokoschka and Carel Willink can be found in the print rooms on every floor of the museum. Aching Feet
There is one model who is always available, never complains of aching feet, doesn’t harp on about more pay and is prepared to adopt every conceivable pose and facial expression – the artist himself. But the reasons why artists recorded themselves were very different over the course of the centuries. Self-portraits made in the seventeenth century are sometimes hard to distinguish from the formal portraits artists made of the elite. Moses ter Borch took a different approach. In 1660 he drew himself with a cheerful expression and an open mouth, unusual for that time. Seven years before that, the twenty-one-year-old Leendert van der Cooghen drew himself as young man staring intensely with a brooding look. He had no need to secure commissions because he came from such a wealthy family that he was at liberty to paint as he chose. For those who did not have this freedom, the self-portrait was often a business card for future clients. Look, see how skilled I am! Rembrandt: King of the Selfie
Sometimes enquiring, concentrated and penetrating, sometimes with youthful exuberance, happy and relaxed, usually alone but sometimes with friends and family. Rembrandt van Rijn is an exception here, too: he studied his likeness throughout his career and no other Northern Netherlandish artist in the seventeenth century drew, etched and painted as many ‘selfies’ as he did. 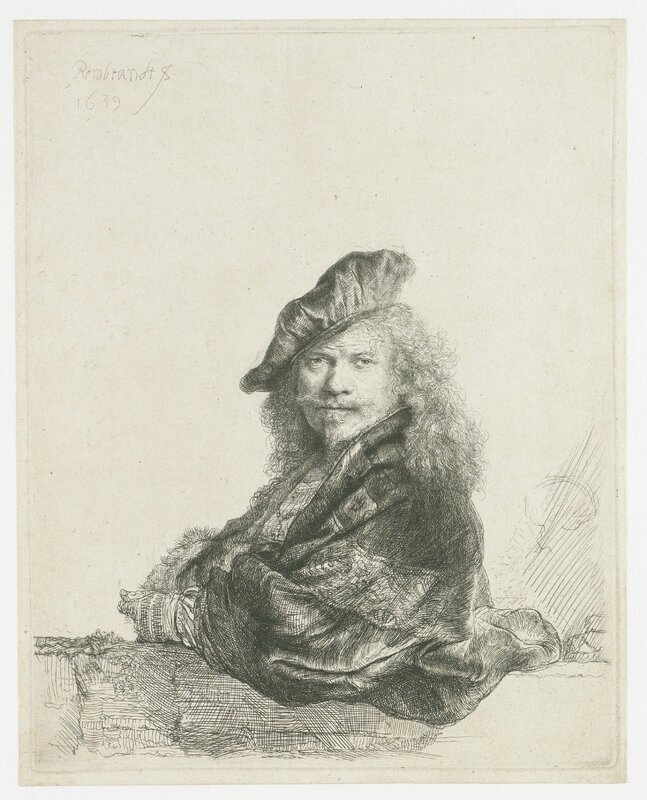 Protruding Lower Lip
In the nineteenth century artists started to portray themselves more informally. A Christmas or New Year’s card with a photo of the whole family on it is popular nowadays, but in 1807 Johann Andreas Boerner (1785-1862) had already wished his family and friends a happy New Year with his own portrait. He enters a room through the door he has just opened. And in the self-portrait of Louis Moritz (1773-1850) his dog is more important than its owner. The dog’s tongue lolls out of his mouth, Moritz has a stubbly chin, a large nose and thick lips. In his probing selfie Wouter Johannes van Troostwijk (1782-1810) also made no attempt to make himself more attractive than he was in real life: his protruding lower lip is easy to see. The rather sombre self-portrait by the German artist Käthe Kollwitz (1867-1945) echoes the theme of her work: war, death and misery. But she too made self-portraits throughout her life. We can feel the melancholy in the etching dating from around 1893, inspired by a Rembrandt self-portrait. Natural Halo
The self-portrait became much freer in the twentieth century. In 1974 sculptor Lotti van der Gaag created a highly imaginative and unorthodox self-portrait with chalk and watercolours. The 1923 lithograph by the Austrian Expressionist Oskar Kokoschka (1886-1980) shows him as a cross between a human being and an animal. Artists harked back to medieval examples, too. Wim Schumacher (1894-1986) gave his self-portrait a diffuse, radiant light and a natural halo around his head. The young Carel Willink (1900-1983) drew himself with a skull in an allusion to his own mortality (the ‘memento mori still life’).

This exhibit was put together in memory of Jacqueline de Raad (1961-2015), Curator of Late Nineteenth- and Twentieth-Century Prints and Drawings (2008-2015).

Selfies on Paper can be found during the winter months in the print rooms on each floor of the museum. Commentaires sur Selfies on paper: Self-portraits from Rembrandt to Willink on view at the Rijksmuseum