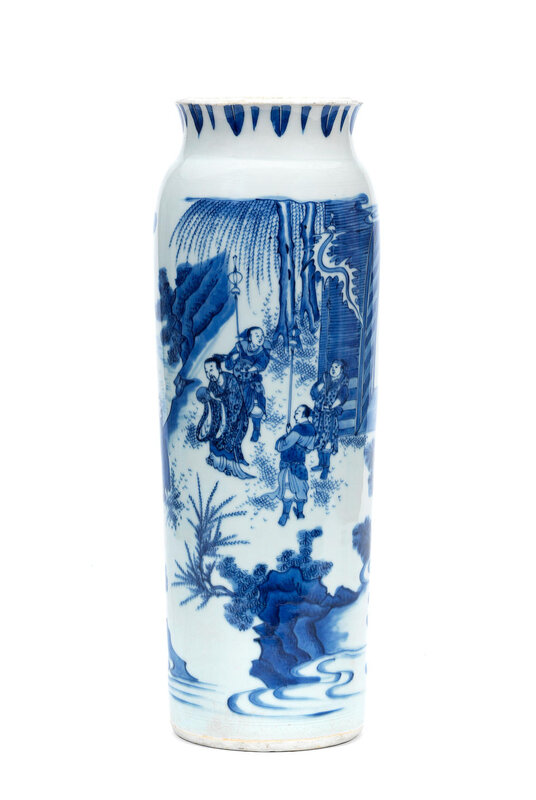 Exquisitely painted to the cylindrical exterior in vivid shades of cobalt blue, depicting a scholar accompanied by guards and disciples holding banners and standards arriving at a lakeside terrace framed by rocks and trees, humbly presenting offerings and greeted by a bearded dignitary, escorted by two servants beside a wheeled chair, all beneath descending stiff leaves to the slightly everted rim above the elegantly recessed neck incised with a band of floral scrolls.

Provenance: an English private collection
By repute, acquired prior to the 1930s, and thence by descent

Note: The vase depicts a story set in the 12th/11th century BC, in which King Wen of Zhou sought the advice of the hermit scholar Jiang Ziya, later known as Taigongwang.

King Wen of Zhou wished to overthrow the Shang, and so sought talented scholars versed in the arts of war and administration. When King Wen met Jiang Ziya, he discovered that this white haired fisherman was actually an astute political thinker and military strategist. He thus appointed Jiang Ziya to be his prime minister and gave him the title of 'Taigongwang' (Hope of the Duke of Zhou). With Jiang Taigong's help, the Shang was overthrown and the Zhou dynasty was firmly established.

Such legends from history, of scholars waiting to serve new more morally upright regimes, would have resonated with the literati class during the turbulent period of the late Ming to early Qing dynasties.

See also a sleeve vase decorated with a similar scene in the Rijksmuseum, Amsterdam, inv.no.AK-NM-6669.