The Mogok’s Fiery Red. A superb pair of ruby and diamond ear pendants, by Faidee

The Mogok’s Fiery Red. A superb pair of ruby and diamond ear pendants, by Faidee Accompanied by premium report no. 82002 dated 25 September 2015 from the SSEF Swiss Gemmological Institute stating that the rubies are of Burma (Myanmar) origin, with no indications of heating; also accompanied by an appendix stating that the pair of ruby ear pendants possesses extraordinary characteristics and merits special mention and appreciation. The four rubies are characterized by a beautifully saturated colour and a fine purity, a combination rarely encountered in Burmese rubies of this size. The small inclusions found by microscopic inspection are the hallmarks of rubies from the classical ruby mines in the Mogok valley in Burma (Myanmar), well known for its wealth in gems since historic times. Their saturated red colour is due to a combination of well-balanced trace elements in these gemstones, characteristic for the fine rubies from Mogok. Assembling a selection natural ruby from Burma of this size and quality is rare and exceptional

Report no.15097175/1 and 2 dated 20 September 2015 from the Gübelin GemLab stating that the rubies are of Burma (Myanmar) origin, with no indications of heating

Report no. 2206718602 dated 28 August 2015 and monograph from the GIA Gemological Institute of America stating that the rubies are of Burma (Myanmar) origin, with no indications of heating and the colour appearance of these stones is described in the trade as "pigeon's blood"

Two reports dated 7 April 2015 and 22 June 2015 from the GIA Gemological Institute of America stating that the 1.50 and 1.52 carat diamonds are E colour, VVS2 and VVS1 clarity, with excellent polish. 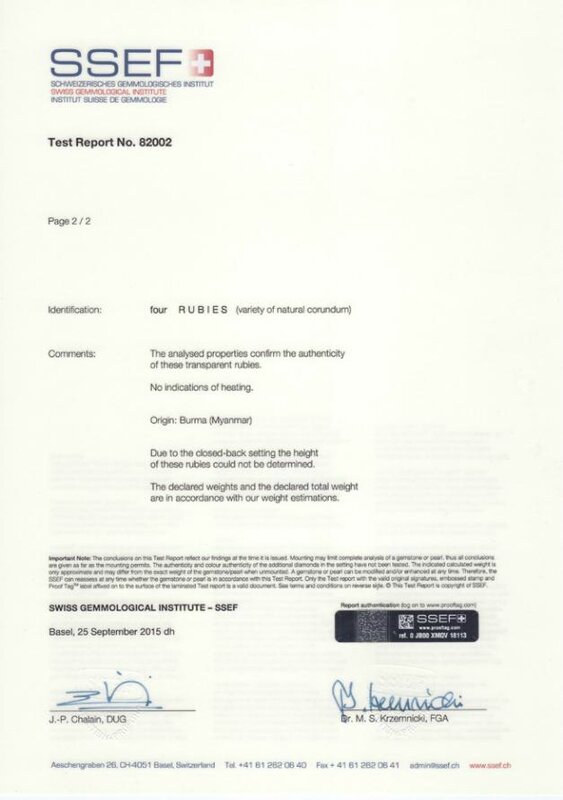 Faidee arduously spent over two decades of his life collecting rubies with very particular characteristics-pure, vividly coloured and full of fire, so that one day they could be made into an exceptional piece of jewellery. Faidee’s manufacturing team took its time to perfect each and every ruby present in the ‘Mogok Fiery Red’ suite. Cutting and polishing began in early 2005 and ended in late 2011. Weight loss in re-cutting and re- polishing the stones was not an issue as they wanted each ruby to be well matched. Each step of the process for every stone was planned, approached and completed with immense care and consideration. The final piece encapsulates Faidee’s philosophy of emphasizing the natural beauty of the gemstones through a simple yet classic design.