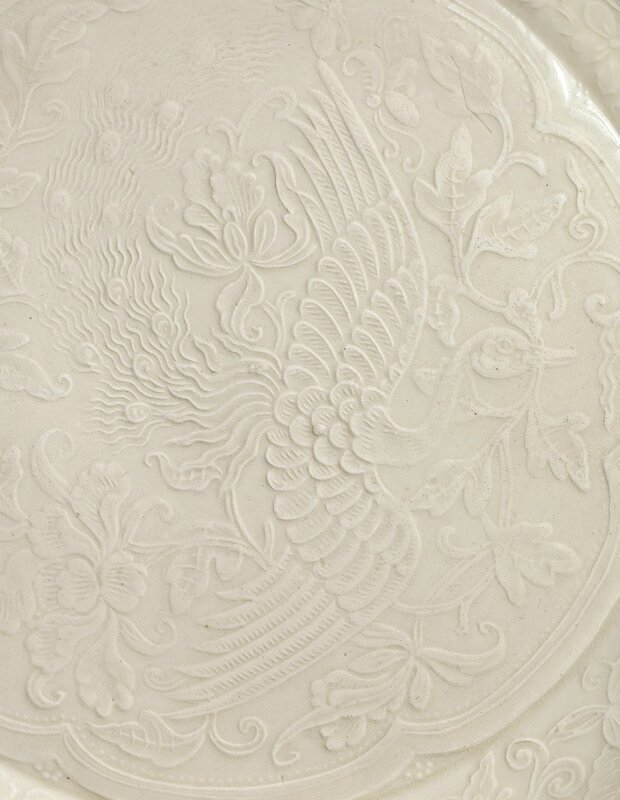 The dish is delicately potted with a flat base and flaring sides and is crisply moulded to the interior with a single peacock flying amid peonies and leaves, adorned by a butterfly and insect, all within a heptafoil frame. The well is further moulded with composite floral scroll below a keyfret band. The dish is covered overall in a warm ivory glaze, thinning in some areas near the foot and rim on the exterior to reveal the white biscuit body. The rim is bound with a metal band. 7 1/8 in. (18.1 cm.) diam., Japanese wood box

Notes: Moulded decoration on Ding wares was adopted in the latter part of the Northern Song dynasty and flourished in Jin dynasty. The moulding technique allowed the Ding potters to adopt more complex and formal designs. The gorgeous peacock on the interior of the present dish is among new animal patterns appeared in the late Northern Song-Jin period. The peacock, an exotic and precious bird from the west, was regarded as an auspicious symbol. It is often depicted amidst rocks and flowers in Song-Yuan period; see peacocks on a Song dynasty kesi painting in the National Palace Museum Collection, illustrated in National Palace Museum. Kesi, Tokyo, 1970, Catalogue, no. 22. It is rare to find peacock pattern on Ding wares. There are two other known examples of similar shape and decoration, both in the National Palace Museum collection. The first with a slightly splayed foot is decorated with three chi-dragons in the well, illustrated by Tsai Meifen, Decorated Porcelains of Dingzhou: White Ding Wares from the collection of the National Palace Museum, Taipei, 2014, p. 188, no. II-125. The second with a flat base is also decorated with three chi-dragons on the well, ibid., p. 189, no. II-126. Compare also with a large moulded ‘peacock’ dish with everted rim, illustrated ibid., p. 192, no. II-128. All three examples lack the heptafoil frame.

Heptafoil shapes were also found in Song metalwork. Compare with a Southern Song silver octafoil dish, illustrated in J.J. Lally & Co., Silver and Gold in Ancient China, 2012, Catalogue, no. 23. In the Song-Jin period, metal forms often influenced wares such as Ding and Jun. These products are often of high quality and were most likely made for the wealthy social elite and the court. According to the Jin official book Dajin jili (Compilation of Rites of the Grand Jin), in the second year of the Tianjuan reign (1139), one thousand Ding pieces were designated as presents to a princess along with other objects. Recently, a large number of moulded Ding shards were discovered in archaeological excavations in Hangzhou, see Tsai Meifen, Decorated Porcelains of Dingzhou: White Ding Wares from the collection of the National Palace Museum, op. cit., p. 275. The sites yielding moulded Ding shards include the residence of Empress Yang (1162-1231), the Governance Hall of Hangzhou, and the Imperial Ancestral Hall. The present piece is representative of the court aesthetic in the Song-Jin period.