LONDON - Leading the sale is a fancy greyish-blue, 2.97cts step-cut diamond ring by the society jeweller to the royals and the stars in the sixties and seventies Andrew Grima estimated at £500,000-700,000.

Of equal merit are a pair of late 19th century earrings set with two cushion-cut 7.92cts and 7.96cts sapphires from Kashmir. They are the property of a European Princess and estimated at £500,000 to £800,000. Both lots will be presented at auction for the first time by Bonhams and are expected to attract interest from around the globe given their exceptional quality and rarity. 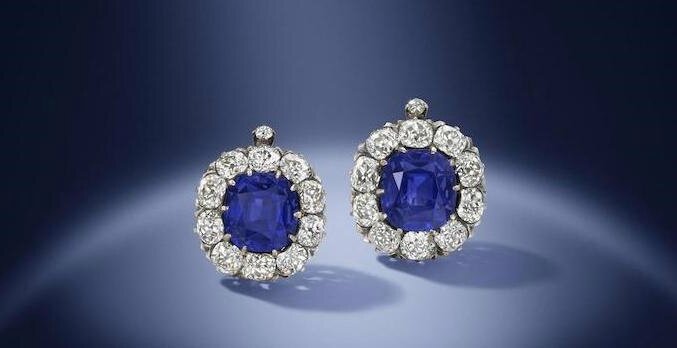 Each set to the centre with a cushion-shaped sapphire, one weighing 7.96 carats, the other weighing 7.92 carats, within a border of old brilliant-cut diamonds, converted, diamonds approximately 7.10 carats total, earring length 2.1cm

Accompanied by reports from SSEF stating that both sapphires are of Kashmir origin, with no evidence of heat treatment. Report numbers 82725 and 82726, both dated 21 October 2015.

White diamonds are also set to sparkle at the sale with two exceptional diamond rings. The first – an Asscher-cut 14.24cts diamond – is estimated at £250,000 to £350,000. The Asscher-cut is often regarded as one of the most elegant diamond cuts. The second is a cushion-shaped 5.02cts diamond ring signed by Marchak Paris, the jewellery house renowned for its creative design. The D colour, internally flawless, stone sits between similarly-cut diamond shoulders and is estimated at £220,000 to £280,000. Accompanied by a report from GIA stating that the diamond is D colour, Internally Flawless clarity. Report number 2165772053, dated 27 April 2015.

A remarkable range of coloured stones feature strongly in the sale which will take place on the first Saturday in December at Bonhams New Bond Street salesroom. Highlighted lots include two Burmese rubies. The first is a 4.79cts cushion shaped ruby and diamond ring by British jeweller Laurence Graff. The ruby is from Burma, has no heat treatment and is estimated at £150,000 to £250,000. Accompanied by a report from SSEF stating that the ruby is of Burmese origin, with no indications of heating. Report number 82840, dated 27 October 2015.

British jeweller Laurence Graff established his eponymous company Graff Diamonds in 1960 in London's Hatton Garden. Today, the company is one of the world's foremost jewellery firms with over 50 international stores. Over the course of his impressive 60 year career, Graff has acquired and sold some of the world's rarest and most exceptional gems and has been dubbed King of Diamonds. The jewels produced by Graff are renowned for their superior quality and exquisite craftsmanship and are made by 70 jewellers in the workrooms below Graff's London office on Albermarle Street in Mayfair. In 2013 Laurence Graff was appointed an Officer of the Order of the British Empire by Her Majesty Queen Elizabeth II.

The second is a Belle Époque ruby and diamond pendant circa 1915. The 3.83cts Burmese ruby is estimated at £30,000 to £40,000 and also has no heat treatment. The cushion shaped ruby is a vibrant, intense red with good transparency. Accompanied by a report from SSEF stating that the ruby is of Burmese origin, with no indications of heat treatment. Report number 82839, dated 27 October 2015.

Accompanied by a report from GCS stating that the ruby weighing 3.83 carats is of Burmese origin, with no indications of heating. Report number 5776-3199, dated 14 October 2015.

No jewellery sale would be without what is regarded as the most elegant and classic lots – natural pearls. Natural pearls have been achieving record prices consistently over the last two years. This is largely as a result of waning supply due to over fishing and pollution. Accompanied by a report from SSEF stating that the pearls are natural, saltwater. Report number 82311, dated 29 September 2015.

Signed jewellery from Van Cleef & Arpels and Cartier is always sought after and Bonhams London is offering a number of excellent examples of pieces from both jewellery houses. These include: A highly unusual and rare example of Art Deco jewellery by Cartier will start the sale in December. The property of a European Noble Family, the diamond flexible bar brooch can be worn in a number of ways: on a cuff, as a hairpiece, on the shoulder, on a collar or worn straight. It is estimated at £15,000-£20,000. This is a rare example of one of Cartier's "novelty" jewels which the firm specialised in during the 1930s. The illustration, from an advertisement in American Vogue in November 1934, shows a similar example marketed as "an amazing new flexible bar set with round and baguette diamonds - four inches long and hinged so that it forms a clip, bracelet, an epaulette or hair ornament."

The auction will feature a number of pieces from the 1960s by Andrew Grima, the Anglo-Italian designer who became known as the doyen of modern jewellery design in Britain. These include a gold, tourmaline and diamond necklace and earclip suite estimated at £20,000-25,000 and a gold and amethyst ring estimated at £2,500-£3,500. Jean Ghika, Director of Jewellery for UK and Europe for Bonhams, said: "Bonhams has declared 2015 the year of the coloured stone and in this final sale of the year we are able to showcase an exceptionally rare fancy greyish blue diamond, alongside Kashmir sapphires, and Burmese rubies, widely acknowledged as the finest and most desirable in the world."